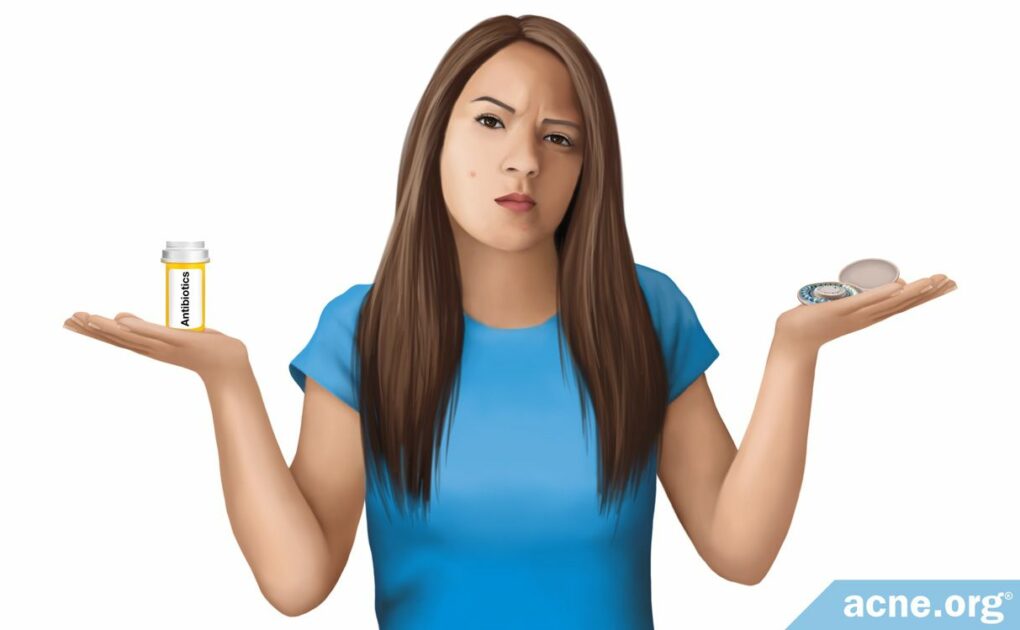 Even though this risk is slight, scientists recommend using a second method of birth control while taking these two medications at the same time.

One Exception – Rifampin: An antibiotic called rifampin may reduce the efficacy of oral contraceptives, and women taking it should be aware of the risk of breakthrough pregnancy. Doctors do not prescribe rifampin for acne, but if you’re on it for any other reason, it’s best to use a backup method of contraception.

Caution: Antibiotics should be a last resort when it comes to acne treatment. Physicians understand this and prescribe them less for acne today than in the past. This is because antibiotics usually do not provide satisfying results, offer only temporary relief, and cause resistant strains of bacteria in about half of users, particularly when they are used for longer periods of time (over 3 months).

Research indicates that there is an extremely small risk that taking antibiotics while on birth control pills results in breakthrough pregnancy, which occurs when a woman gets pregnant even though she uses birth control. Because of this risk, scientists recommend caution and using a second method of birth control when taking these medications at the same time, particularly when using an antibiotic called rifampin.

Let’s have a deeper look now and see what the studies say.

Four large systematic reviews investigated the evidence concerning whether antibiotics make birth control pills less reliable. Systematic reviews are rigorous literature reviews that look at multiple studies and pool the results into a combined analysis. This type of review is considered to be the highest level of evidence.

Overall, these reviews have found that there is little chance of breakthrough pregnancy when using antibiotics prescribed for acne, but particular care should be taken in women who are using an antibiotic called rifampin.1-4