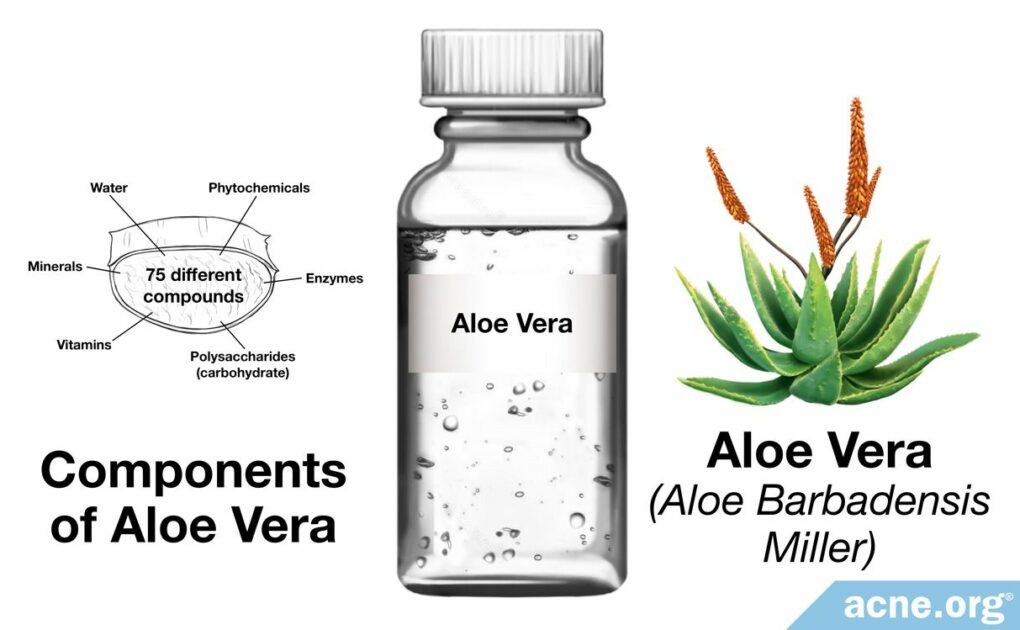 Probably Not to a Measurable Degree

Aloe exhibits healing properties. However, scientific evidence to date indicates that Aloe is not likely to help reduce acne to a measurable degree.

When we dig into the research, we see that Aloe may fall short in the following areas:

Wound healing effects: Acne lesions are, medically speaking, small wounds. While Aloe is widely spoken about as a soothing agent that can help heal wounds, the evidence that it improves wound healing is inconclusive.

On the other hand, Aloe does provide one activity that may help with acne:

Penetration-enhancing effects: There is some evidence that Aloe may help topical drugs, including acne treatments, penetrate more readily into the skin.

The Bottom Line: Quality Aloe products or fresh Aloe right from the plant may prove to be beneficial for some skin conditions, but acne is not one of the shining examples. Aloe also tends to be unstable and quickly degrade, so even if it did work well for acne, it can be difficult to find high-quality Aloe on the market.

Aloe and Its Potential for Healing

Aloe exhibits anti-inflammatory and antibacterial action, and may promote wound healing. It has been used to aid in the treatment of a variety of medical issues including wounds and injuries, bruises, allergic and parasitic skin conditions, cancerous lesions, gastrointestinal ulcers, and is also used to soothe the skin.2-4

Aloe is now integrated into Western medicine, as described in a recent publication in Biomedicine & Pharmacotherapy:

“Numerous…studies as well as clinical trials have confirmed the traditional uses of Aloe including wound healing…activities. These studies have also indicated new properties such as anti-diabetic, hypoglycemic, anti-cancer, antimicrobial, antiviral, antihyperlipidemic and anti-ulcer activities.”2

However, as we will see as we investigate Aloe’s potential role in the treatment of acne, the evidence is not as promising. The short story here is that acne-prone people are unlikely to derive much benefit from over-the-counter Aloe when it comes to acne.

The Components of Aloe

The most common strain of Aloe studied by medical researchers is Aloe vera.

The two Aloe vera products most commonly used in medicines and supplements are:

Since Aloe gel is what is most commonly used, let’s focus on that.

Aloe gel is made up of over 99.5% water. Aside from water there are also over 75 different compounds, including polysaccharides (a specific kind of carbohydrate), vitamins, minerals, enzymes, and other phytochemicals.2

Because there are so many compounds in Aloe gel, its healing effects may be explained by the effect of all of Aloe’s components combined together, and not necessarily from just one compound in the plant.2,4

Studies on Aloe and Acne – Inconclusive

Three studies have tested Aloe as a treatment for acne. Two of these studies attempted to treat acne with topical Aloe, while the third tested whether drinking Aloe juice might improve acne.

Unfortunately, the results are inconclusive on the question of whether Aloe can benefit people with acne. Let’s take a quick look:

To sum up, the studies conducted so far are inconclusive on whether Aloe can really help with acne. Still, let’s take a look at the reasons Aloe might be worth exploring as a potential acne remedy.

Why Explore Aloe as an Acne Treatment?

Aloe has five properties that are potentially relevant to acne:

Since Aloe has potentially beneficial properties in some of these areas it is logical to examine the role Aloe might play in treating acne. However, as we’ll see below, the promise of Aloe seems to fade when we look more closely at the data.

Let’s take a deeper dive now and see how Aloe affects each of these properties.

Inflammation can be triggered by a number of chemicals in the body, called inflammatory mediators. As researchers from a study published in Phytomedicine explain:

The antibacterial activity of Aloe has been proven against several types of bacteria, for example, a type of bacteria called Staphylococcus.2,3 However, Aloe may fall short when it comes to killing acne bacteria, which is called Cutibacterium acnes:

The same study in the journal Phytomedicine found that Aloe was ineffective in killing Cutibacterium acnes (C. acnes), a bacterial strain that aggravates acne by inducing inflammation. Because C. acnes is the most important bacteria in acne pathology, it is unlikely that Aloe’s antibacterial properties are relevant for acne.8

Aloe for Skin Irritation and Dryness (Evidence Is Conflicting)

Skin irritation, dryness, and scaling are common side effects of topical acne treatments. However, even without using acne treatments, acne patients typically already have what is called an impaired skin barrier function, which makes the skin lose more water and become dehydrated more easily than acne-free skin. Can the application of Aloe reduce the irritation and dry skin associated with acne and acne medication? The evidence to date is contradictory.9 While some studies find a small improvement in skin irritation and/or dryness with Aloe, others find Aloe ineffective in reducing these side effects of topical acne treatment.9-11

The wound healing process is important to acne. Acne lesions are essentially skin wounds, and slow healing of acne wounds can lead to scars and post-inflammatory hyperpigmentation (dark/red spots).

While some studies have shown that Aloe can improve wound healing, a review of the evidence to date shows mixed results and suggests that more research is necessary.2,12,13

One study has shown that Aloe can increase the effectiveness of other topical medications by improving their ability to be absorbed into the skin.14

Can Aloe also improve the effectiveness of topical acne treatments specifically? Two studies suggest that it might. In these studies, adding Aloe to a topical treatment regimen increased the treatment’s efficacy.1,15

Why Is There So Little Conclusive Evidence?

The research around the effectiveness of Aloe, particularly regarding skin irritation and wound healing, is inconclusive. Some studies have shown benefits to using Aloe and some have shown it to be ineffective.

The differences in Aloe formulations and the instability of the polysaccharides found in Aloe gel may explain the contradictory data. As researchers from a 2008 study published in the journal Molecules explain:

“…these conflicting results could be due to the use of plants from different locations with variations in their chemical composition and also because of different isolation techniques that were used to extract compounds from the Aloe leaf pulp…Furthermore, the polysaccharides found in Aloe gel are not stable, especially under stress conditions such as heat, the presence of acid and enzymatic activities.“3

If researchers can adopt a standardized method for producing Aloe gel products that avoid degradation of the unstable polysaccharides in the gel, it may be possible to achieve more consistent study results.3 But for the time being, based on what we can gather from existing data, Aloe most likely does not hold great promise in acne treatment.

If you would like to try adding an aloe vera mask to your daily regimen, follow these simple instructions: