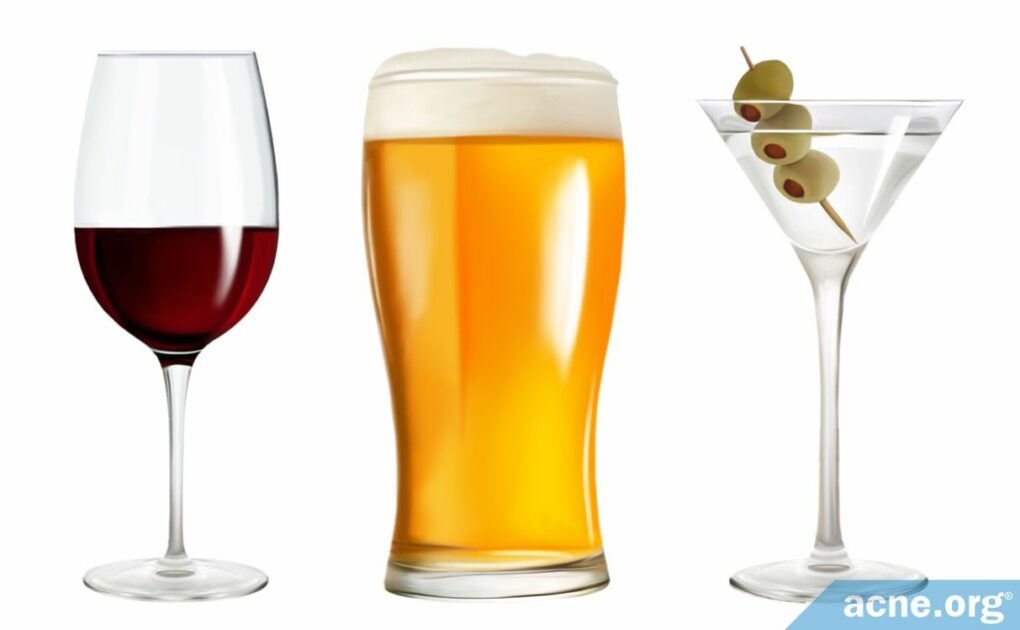 Looking at the Research and Possible Links Between Alcohol and Acne

Four studies have been performed thus far that look at how drinking alcohol might affect acne.

In other words, results are conflicting, so at this time we cannot rely on published research to give us a good answer. This is how it often goes with science. You simply need more evidence to come in before the answer to a question starts becoming clearer.

Common Sense: In the absence of conclusive data, we can sometimes turn to common sense, which in this case tells us that inebriated people are more likely to:

The Bottom Line: Moderation is a good rule of thumb for most things in life. If you go overboard with anything, including drinking, bad things might happen. On the other hand, having a few drinks with friends from time to time is probably unlikely to lead to more acne. Just make sure to do your daily acne treatment regimen before you go to bed.

What Does the Research Say?

Only a limited amount of research has examined the relationship between alcohol and acne and at this point we cannot say definitively if drinking causes or worsens acne, or for that matter if drinking has no effect or even helps clear acne. Let’s look at the studies we have:

Two studies found: Drinking may be associated with an increased prevalence of acne

The first study, published in International Journal of Dermatology in 2011, examined 1236 subjects with acne and reported that drinking was a strong risk factor for acne, and that this link was stronger in males than in females.1

Two studies found: No connection between alcohol consumption and acne

We also have two studies that show the opposite–that alcohol does not affect acne.

The first of these studies did not disclose the data, and this makes it difficult to draw any strong conclusions.3

The second of these studies, however, seems to give us the best data so far out of any of the studies we have. In the study, researchers analyzed skin conditions in a large number of drinkers and non-drinkers over 4 years and also found no association between alcohol and acne.4

A third study, published in 2014, came to a different conclusion that alcohol consumption was not linked with acne, however, since the data from the study was not reported, it is difficult to evaluate the quality or significance of the results.3

A final study published in 2013 in the journal Anais brasileiros de dermatologia looked at the skin of 278 alcohol patients over a period of 4 years. The researchers compared these patients to 271 non-alcoholic patients from the Military Police Force. The scientists found no difference in acne between the alcoholic and non-alcoholic patients. They concluded alcohol to be a risk factor for several other skin conditions but not for acne.4

If Alcohol Did Worsen Acne, How Might That Occur?

Researchers have proposed several hypotheses regarding how alcohol might cause or worsen acne and suggested that changes in one of the following three areas could be to blame:

Again, these hypotheses should be met with skepticism since we do not have quality data from randomized studies from which to draw any conclusions. They are simply interesting areas to look into.

Hormones are an important factor in acne development, particularly male hormones called androgens, which are present in both males and females. Higher levels of androgens, such as testosterone, usually lead to more acne.

Two studies show us that testosterone levels appear to be increased in Caucasian men both after acute4 and habitual drinking.5

Further complicating matters, one other study showed the opposite – decreased testosterone in physically active men of Indian descent who are regular drinkers.8

Although it is not completely clear why there is a discrepancy in these studies, since people of Asian descent are known to metabolize alcohol differently than Caucasians,9 it is possible that this variation accounts for different results in testosterone levels.

In other words, as you can see, we have some evidence that drinking might increase testosterone in Caucasian men, but this has not been replicated in men of other ethnicities. Until much more data comes in from around the globe, we won’t be able to say how drinking affects hormones in men, and whether this might affect acne.

Ready for a double whammy? In women, drinking appears to increase estrogen levels, and the amount of alcohol women consume is directly related to the increase in estrogen levels.6-7 Higher levels of estrogen normally correlate with fewer acne symptoms, so this would seem to point toward alcohol potentially reducing the chance of having acne in women.

Although all of these studies point to a possible association between drinking alcohol and hormone levels, exactly what this association might end up being remains unclear, and the data is rife with inconsistencies in ethnicity and gender.

Bacteria (in both men and women)

After drinking, some alcohol can be secreted through our sweat. Researchers have proposed that the alcohol secreted in sweat could possibly act as a fuel for acne bacteria.10 Acne bacteria can metabolize alcohol and use it as a fuel source. Researchers hypothesize that a byproduct of this metabolism called acetaldehydes may exacerbate acne.10 Again, this is by no means factual. It is simply an initial hypothesis.

Inflammation (in both men and women)

Chronic use of alcohol causes the body to release more inflammatory molecules called cytokines.12 Studies have shown that increased levels of cytokines can predispose individuals to develop acne and play an important role in the early stages of acne formation.13 So can drinking lead to inflammation and more acne? You guessed it, this is an interesting hypothesis, but still unproven.

Other Considerations Regarding Alcohol and Acne

Overuse of any drug, including alcohol, can cause stress. Drinking too much can veer one’s life off course, and in severe cases can cause people to lose their jobs, friends, and family. All of these outcomes are stress inducing. We know that stress and acne are related, so this is something to think about.

Getting drunk can cause people to miss their nightly skin care regimen. Missing even one application of your daily regimen can lead to breakouts.

In order to prevent acne, it is important to avoid irritating one’s skin. Alcohol acutely affects motor skills. A person is simply not as careful when under the influence of alcohol. This can lead to increased irritation of the skin and potential breakouts as a result.