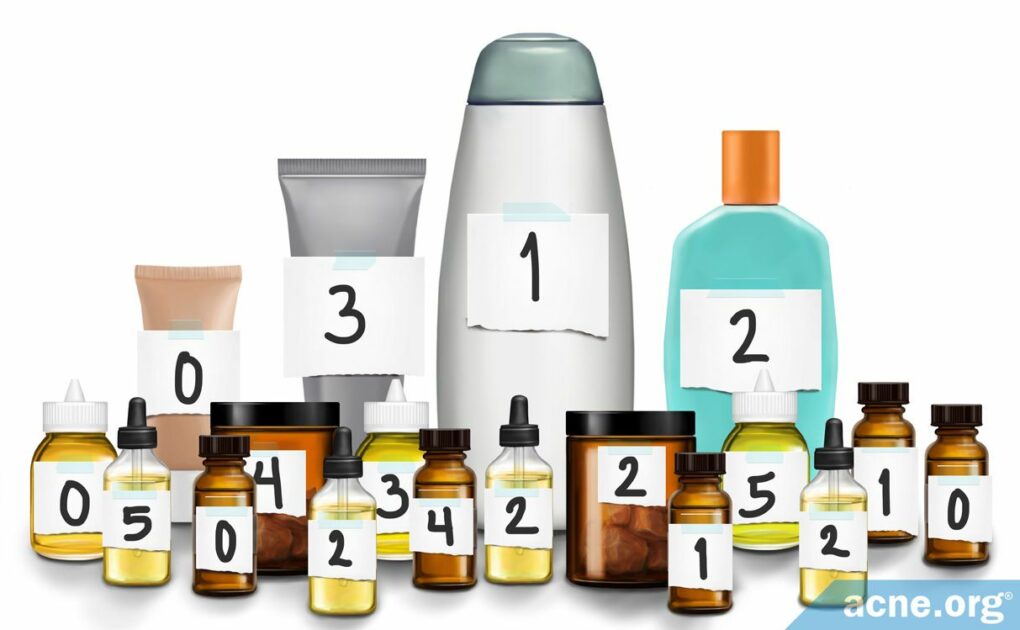 This article will go in depth and cover everything there is to know about comedogenicity and comedogenic ingredients. For a brief, summarized version of this article, see the shorter, simplified article here.

What Does Comedogenicity Mean?

Clogged pores lead to acne. Comedogenicity is a term that describes the potential of a substance to cause a comedone, which is the scientific name for a clogged pore.

When choosing a cosmetic product for use on acne-prone skin, it is important to consider if its ingredients are comedogenic. Researchers have performed 11 studies investigating the capability of numerous ingredients and final products to clog pores, and this gives us a fair idea of which ingredients to watch out for.

How Do Scientists Measure Comedogenicity?

To determine the comedogenicity of a cosmetic ingredient, scientists use one of two methods:

Rabbit ear assay [Note: Acne.org does not test on animals]

Scientists perform the rabbit ear assay (REA) by applying a cosmetic ingredient to the skin of the internal surface of a live male albino rabbit ear. Researchers use rabbits to test for comedogenicity because rabbit ear skin is similar to human skin and develops comedones. Comedone formation occurs much faster in rabbits, and this is beneficial to studies because comedogenicity can be determined faster when using the REA than would be possible on human skin.

To perform the REA correctly, several factors must be considered:

Evaluating the results of a rabbit ear assay (REA)

The visual inspection and whole mount methods are easiest to perform rapidly and can be used to identify a strong comedogenic response. However, they are not effective at identifying weak comedogenic responses. The histological examination method is the most reliable and can detect weak comedogenicity, but is a more difficult method and requires more time. Whichever method is used, researchers report on the comedogenicity of a cosmetic ingredient with a scale. The American Academy of Dermatology recommends using a scale of 0 – 3, with 0 representing non-comedogenic products and 3 representing highly comedogenic products. However, a few research groups choose to report their REA findings using scales from 0 – 4 or 0 – 5.1-4

Scientists perform the human method by applying a cosmetic ingredient onto the upper back of people with naturally large skin pores daily for at least four weeks. Then, the comedogenicity of the tested substance is examined through a process called cyanoacrylate follicular biopsy. To perform a cyanoacrylate follicular biopsy, the researchers coat the upper back of study-participants with a thin layer of a special glue called methyl cyanoacrylate. On top of the glue is placed a glass slide. After resting the slide on the glue for one minute, the researchers remove it from the upper back. When the slide is removed, the glue sticks to and removes the uppermost layer of the skin. Viewing this skin under a microscope allows for the scientists to examine the number and content of comedones in the uppermost layer of the skin. Like the REA, scientists performing the human method of comedogenicity testing rate the comedone forming ability of the ingredient also with a 0 – 3, 0 – 4, or 0 – 5 scale.3,4

Comparing the REA and human method

To determine if a substance that clogs pores in rabbits will also clog pores in humans, scientists compared the data from several studies and drew two conclusions.4-6

Despite the differences in the two methods, research commonly is performed using both.

Scientists have performed 11 studies investigating the comedogenicity of cosmetic ingredients or of cosmetic products using either the REA or human method, or both. Let’s take a look at them one by one.

A 1972 study published in the Archives of Dermatology first tested the comedogenicity of cosmetic ingredients using the REA and human method with a scale of 0 – 3. Comedogenicity was determined using the whole mount method. The products investigated in this study included 7 types of vegetable oil, 23 varieties of petrolatum products, such as petroleum jelly, and several miscellaneous ingredients and consumer products, including five brands of soap. The researchers found that linseed oil, cocoa butter, and olive oil were the most comedogenic oils; Vaseline® petroleum jelly was the most comedogenic petrolatum product; acetylated lanolin alcohols were the most comedogenic lanolins, and the all soaps were non-comedogenic. The table below displays the full ingredient list tested in this study with their associated REA scores. The study did not report the human method scores. However, the researchers did note that human skin was less sensitive to the ingredients than rabbit skin. Specifically, they found that only ingredients with a grade of 2 or 3 by the REA were comedogenic in humans.7

A 1982 study published in the Archives of Dermatology examined the comedogenicity of several cosmetic ingredients and cosmetic products using the REA and human method with a scale of 0 – 3. Comedogenicity was determined using the histological examination method. The researchers found that the most comedogenic ingredients were 5% crude coal tar, sulfur products, acetylated lanolin alcohols, cocoa butter, and lanolin fatty acids. They found also that between the REA and human method, the human method was less sensitive. The table below displays the comedogenicity scores for the ingredients and products tested in this study.9

Although this study researched too many ingredients to include the full comedogenicity results here, the researchers drew several conclusions about the comedogenicity of multiple classes of ingredient. These include:

Mineral oils comprise a class of oils that have been reported with a range of comedogenicity from 0 – 2. However, it is likely that the modern, pure version of mineral oil is non-comedogenic.

Although all 200 ingredients tested cannot be listed here, the table below lists the most comedogenic ingredients they identified, as measured by having a score of at least 3 on a scale of 0 – 5. Comedogenicity was determined using the histological examination method.

1. First, they concluded that the REA was more sensitive than the human method, so a comedogenic ingredient as measured by the REA may not be comedogenic in humans.

However, these two conclusions are speculations, and scientists need to perform more research before conclusions can be made. Further, because the researchers were unscrupulous with the label – labeling products as non-comedogenic even if they increased the number of comedones by 40 – 49% – it is possible that a more stringent comedogenicity measurement would have produced slightly different conclusions.15

Although we have seen that scientists have performed several studies investigating which ingredients are comedogenic, it can be difficult to analyze the data. This is because each study employs its own method, scale, ingredients, concentrations, vehicle, and duration of testing for each of the ingredients. Also, REA comedogenicity does not apply to humans, necessarily.

Still, the data we have is good enough for us to compile two lists that we can use with a fair amount of confidence.

List 1: Avoid: These are ingredients that were found to be comedogenic in two (2) or more REAs or in at least one (1) human study

List 2: Consider Avoiding: These are ingredients that were found to be comedogenic in only one (1) REA