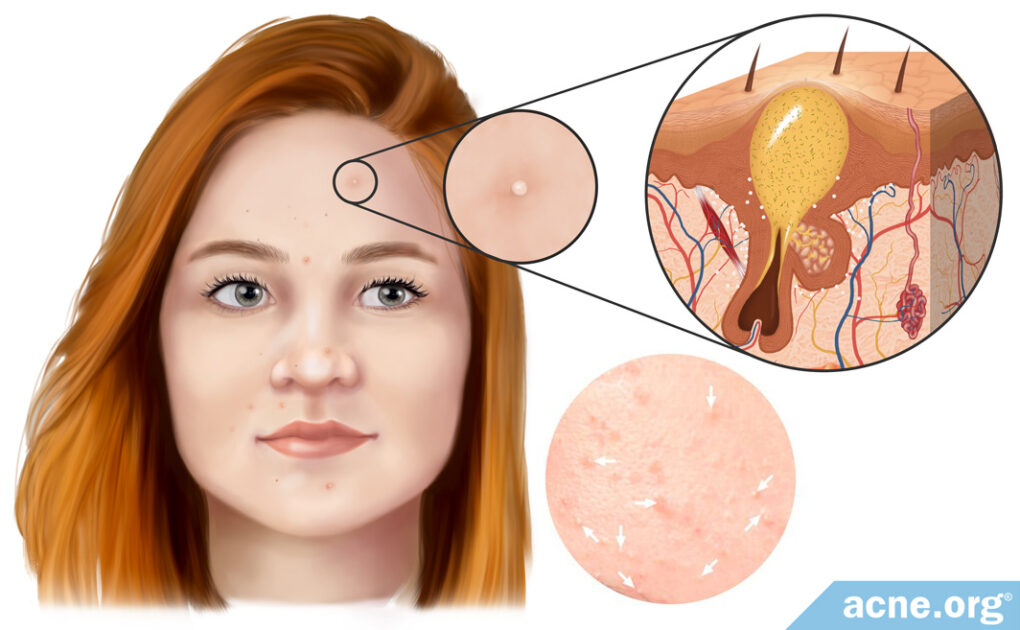 A Whitehead Is a Small, White or Skin-colored Clogged Pore

Whiteheads, also known as closed comedones, are small, non-inflammatory, white or skin-colored lesions that most often develop on the face, particularly on the nose and around the mouth. They are most common during teen years, but can be seen at any age.

These lesions develop when a pore becomes clogged and begins to fill up with trapped skin oil. A whitehead remains on the skin for only a few days, before either going away on its own, or developing into an inflammatory lesion, such as a papule, pustule, nodule, or cyst.

Not to Be Confused with a Pustule: When people think of a “whitehead” they often think of a red, sore lesion with a white or yellow center. However, this is not a whitehead, and instead is called a pustule. A whitehead is not red or sore, and is smaller than a pustule.

Whiteheads are small, white or skin-colored clogged pores (comedones) that mainly form on the nose and in the area around the mouth, but can also be found elsewhere on the face, neck, and body.

Dermatologists classify whiteheads as “non-inflammatory” acne lesions because they are not red, swollen, or painful.

Whiteheads form when a pore becomes completely clogged and skin oil gets trapped inside. Once a whitehead develops on the skin, it remains for several days, after which it either heals on its own or develops into an inflammatory acne lesion that becomes red and sore.

Most people develop whiteheads in their teenage or young adult years, but developing them at a younger or older age is also common.1-3

Step 1 – Blockage of pore & formation of a microcomedone

All acne lesions begin with microscopic hair follicles, often referred to as pores, in the skin. Attached to these pores are glands, called sebaceous glands, that produce skin oil, called sebum. Normally, after the sebaceous glands produce sebum, the sebum slowly moves up the pore toward the surface of the skin where it is expelled onto the skin’s surface. However, in acne, the opening to the pore becomes blocked with skin cells, and this results in the development of a clogged pore, called a comedone. When the pore first becomes blocked, the lesion is called a microcomedone, and cannot be seen with the naked eye.

After a microcomedone forms, the sebum, which is unable to escape the pore, begins to build up. Eventually, the microcomedone becomes larger due to this buildup of sebum. When the microcomedone grows large enough to be visible to the naked eye, it is called a comedone.

There are two types of comedones, whiteheads and blackheads.

What Causes a Whitehead?

Several factors are thought to contribute to the development of whiteheads, including:

In addition, the acne bacteria called C. acnes may also play a part in the development of whiteheads. Researchers are still trying to determine at what point in the formation of an acne lesion these bacteria start to overgrow. One study found that even pores that are just beginning to clog may already contain over-active C. acnes bacteria. However, it is unclear exactly what role these bacteria may play in turning a pore that is starting to clog into a bona fide acne lesion.8

Whiteheads, also known as closed comedones, are small, non-inflammatory, white or skin-colored lesions that most often develop on the face. These lesions develop when a pore becomes clogged with skin cells, and this clogged pore begins to fill up with sebum (skin oil). A whitehead normally remains on the skin for only a few days, before either healing on its own, or developing into an inflammatory lesion, such as a papule, pustule, nodule, or cyst.