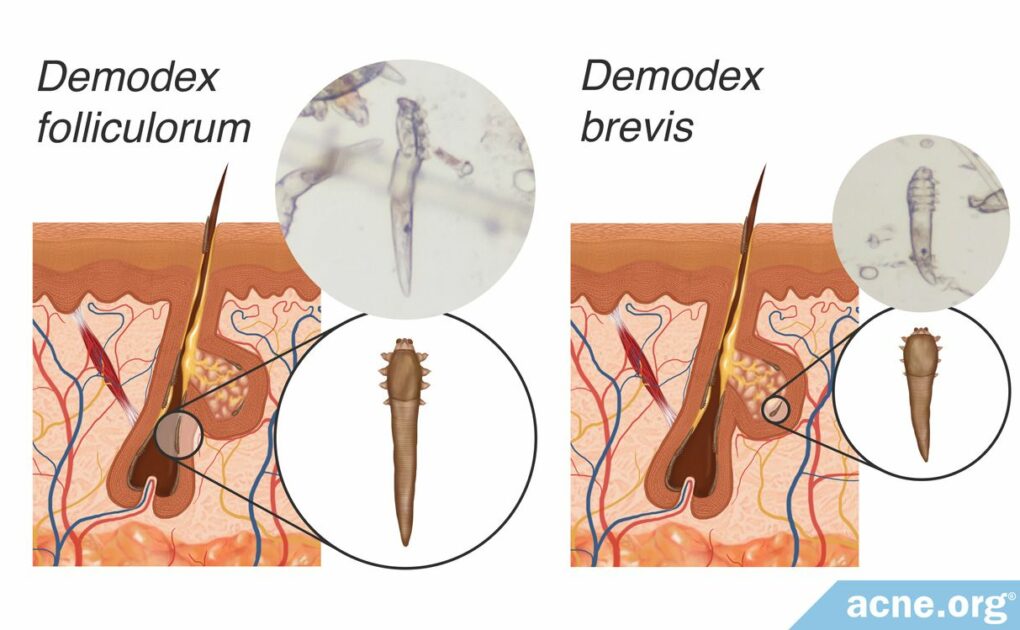 Demodex Mites Are Tiny Creatures That Live in Our Skin and May Contribute to Some Skin Diseases, but It Is Uncertain Whether They Affect Acne

Demodex mites are tiny, colorless creatures that live in our hair follicles and skin oil glands and usually move around only at night. Their entire lifecycle lasts only a few weeks. All people have these mites, though they are more abundant in some people than in others.

While Demodex mites are generally harmless, and may even benefit us by helping create an acidic environment in the skin where harmful bacteria can’t survive, they can lead to skin diseases in some select people.

When it comes to acne, three initial studies show that people with acne may have more mites on their skin. However, we don’t know whether the mites play a part in causing acne, or whether it’s the other way around and having acne leads the mites to overgrow. In other words, whether Demodex mites might cause, worsen, or even reduce acne symptoms is still unclear.

Because these mites live on all humans, their sole presence is not a problem. However, for people who experience mite-related diseases or other reactions, medications such as ivermectin, permethrin, and metronidazole can eliminate them. Tea tree oil may also be a weapon in the arsenal against these mites.

Demodex mites are tiny, insect-like organisms that live in human hair follicles and sebaceous (skin oil) glands, where they lay their eggs and ultimately die. This entire life cycle is only a few weeks.1-4

They are technically visible, but we never see them because in addition to being extremely small, they are colorless. They also usually only move around at night, and they move extremely slowly, about 1 cm/hr.

There are more than 100 types of Demodex mites, but only two types are abundant on the human body.

Why Do Demodex Mites Live in Our Skin?

Demodex mites are present in the hair follicles and sebaceous glands of all humans, though some people have more mites than others.4

Researchers do not know exactly why these mites live in our skin. We most likely evolved in a symbiotic (mutually beneficial) relationship with the mites, and they have probably coexisted with us for a long time. One theory is that, along with beneficial bacteria that also live on the skin, Demodex mites may protect human skin against harmful bacteria. The mites contain an enzyme (substance that speeds chemical reactions) that breaks down various skin oils into acids. This creates a mildly acidic environment on the skin that makes it harder for harmful bacteria to thrive.4,5

Can Demodex Mites Cause Problems?

While Demodex mites are present on all humans and are generally not harmful, they can cause problems in some people.

Because the mites cannot digest what they consume, they rely on another symbiotic relationship with bacteria that help them digest their food. They also lack an anus and cannot eliminate their waste. Because of these peculiarities, Demodex mites release a large amount of bacteria and waste into the skin immediately when they die, and this may provoke an immune response and inflammation in their human host.

Demodex mites appear to contribute to several skin diseases, and researchers call such skin diseases caused by these mites demodicoses, the singular of which is demodicosis.3,4,6 Acne is not a demodicosis. However, acne is an inflammatory disease, so there is some speculation that in certain cases, Demodex mites might add to the severity of acne symptoms.

Why Demodex mites cause problems in some people but not in others remains unknown. However, this is what research is pointing toward:

Scientists have proposed several ways in which Demodex mites might contribute to skin diseases:

Do Demodex Mites Contribute to Acne?

Although Demodex mites appear to play a role in other skin diseases, it is uncertain whether they contribute to acne.

One study, which looked at D. folliculorum mites in 102 young adults, found no relationship between the number of these mites on a person’s skin and acne. In other words, having more mites on the skin did not translate into having acne or having more severe acne.10

However, three other studies, one published in China, one in Poland, and one in Brazil, did find an association between Demodex mites and acne.11-13 In those three studies, having more mites on the skin did seem to correlate with having acne. However, this finding presents a chicken-or-egg problem: Did the overgrowth of the mites contribute to acne, or did the acne allow the mites to overgrow? We simply don’t know yet.

As it often goes with emerging science, we will need more research before we can draw any conclusions.

What Treatments Are Available for Demodex Mites?

Everyone’s skin contains Demodex mites, and the mere presence of the mites is not a problem.

However, for people who experience demodicoses like the ones described above, there are several treatments that can eliminate them. Treatment usually includes medications with antiprotozoal (protozoa are single-cell organisms), insecticide (poisonous to a variety of insects), and/or acaricide (poisonous to mites and ticks) properties. The most common medications for eliminating these mites are:

While it’s interesting to learn about Demodex mites, it is best not to look to them as a primary concern when it comes to acne. There are other proven treatments for acne that address the real concerns regarding acne and consistently work to help clear the skin.