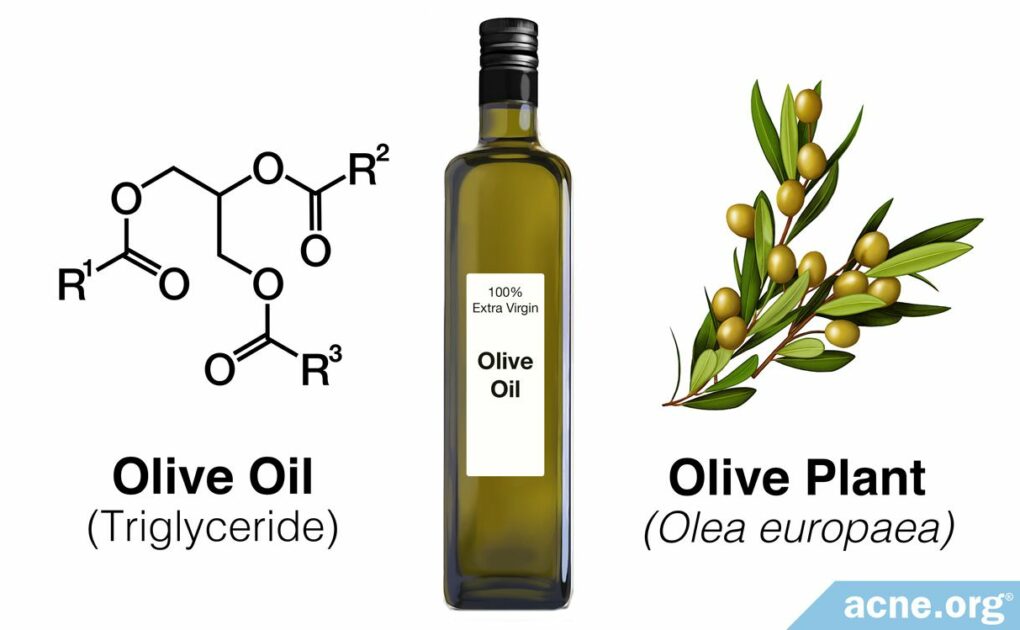 Olive Oil May Be Beneficial for Overall Healthy Skin, but May Not Be Safe for Acne-prone Skin

1 Big Negative: Research has found that olive oil may be slightly comedogenic, meaning that it may clog pores to some degree.

People have used oils, including olive oil, on the skin for centuries because some oils can help to improve:

It also contains vitamins A, D, E, K, and other antioxidants. Antioxidants are important for the skin because they help to counteract the effect of toxic molecules that can harm the skin.

Scientists have found that both topical application and oral consumption of olive oil has the following effects on the skin:

One big negative: However, on the downside, the fatty acid mixture found in some oils make the oil comedogenic (clogs pores).1-2 When tested on rabbit ears, olive oil scored a 2 out of 5 for pore clogging, which is considered only mildly comedogenic, but comedogenic nonetheless.3-5

Other oils, like sunflower oil, safflower oil, and jojoba oil, are non-comedogenic (do not clog pores), and are better options for people with acne.

How Olive Oil Acts on the Skin

Olive oil acts on the skin through five distinct mechanisms. These include:

Let’s have a closer look at these mechanisms now, one by one.

Olive Oil and the Skin Barrier

People with acne may have an impaired skin barrier function, so when it comes to acne, it is imperative that we keep the skin barrier intact and healthy.

Scientists investigating the effect of olive oil on the skin barrier have reported conflicting conclusions:

In other words, we don’t know if olive oil is good or bad for the skin barrier.

On the other hand, lab studies also show that some components of olive oil may stimulate the growth of Malassezia, a type of fungus that can cause inflammation of the skin.11,12 In other words, while olive oil might halt the growth of bacteria that contribute to acne, it might simultaneously promote the growth of fungus, which can lead to other skin conditions.

For this reason, the authors of a 2012 article in the journal Archives of Pediatrics and Adolescent Medicine wrote:

“Based on the evidence currently available, it may be prudent to avoid organic oils, especially olive oil, when treating…inflammatory skin diseases.”12

Acne lesions are a type of wound, and inflammation is always present in and around acne lesions. Inflammation can delay wound healing, lead to scarring, and increase the chance that hyperpigmentation (red/dark marks) will be left on the skin after the lesion heals.

Studies have shown that olive oil can promote wound healing and reduce inflammation in both animals and humans. The studies below include research on both topical and oral olive oil. However, keep in mind when reading the studies that the effects of oral olive in the diet may not be the same when it comes to topical olive oil.13-17

Olive Oil and An Increase in Skin Absorption

Overall, olive oil may be beneficial for skin health. However, due to its mildly comedogenic properties, it is not recommended for acne-prone skin. Other oils, such as sunflower oil, safflower oil, and jojoba oil may be better options for acne sufferers, since they are beneficial to the skin and also non-comedogenic.