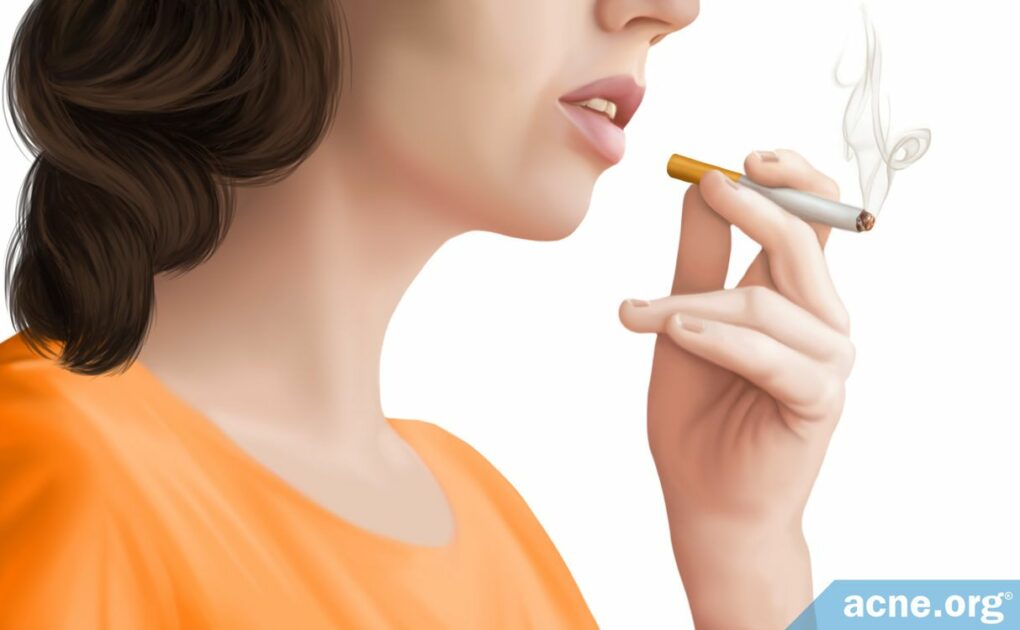 Looking at the Research and Possible Links Between Smoking and Acne

Inflammation: We know that smoking increases inflammatory molecules in the body. Since acne is an inflammatory disease, it is safer to avoid cigarettes.

Smoking Makes You Look Worse: Smoking is closely linked with wrinkles, premature aging, hair loss, and tooth discoloration. So, even if it doesn’t lead to more acne, there is a good chance it will make you look worse.

Vaping (E-cigarettes): Research is starting to trickle in, and it appears that vaping may also increase inflammatory molecules in the body, so it is also safer to avoid vaping.

My Experience: I smoked for about 5 or 6 years and finally quit graduation day from college. My acne was at its worst during the years that I smoked, but I don’t know whether this was coincidence or not. My advice to anyone would be to just not try cigarettes in the first place. They are incredibly addictive and I found them to be a monkey on my back and a negative influence on my life, regardless of whether they made my acne worse.

You’ve heard the statistics. Smoking causes three million deaths per year worldwide.1-2 It causes many forms of cancer and untold pain and suffering, not to mention hundreds of billions of dollars in preventable health care costs. Common sense would say that smoking negatively affects almost every bodily condition, including acne. But evidence remains unclear whether this is true.3-11

To date, eleven studies have examined the association between smoking and acne. Of these:

In short, evidence is conflicting, and the medical research community needs quite a bit more data to come to a consensus.

While smoking may or may not aggravate acne, it does harm the skin.14 Among other things, smoking is linked to poor wound healing. Medically speaking, acne lesions are wounds, and thus it would make sense that smoking might cause our bodies to heal acne lesions more slowly. In order for acne lesions to heal, the skin needs to receive sufficient blood supply, and skin cells need to divide in order to make new cells to repair the wound. Smoking reduces these functions and considerably slows down the healing process.1,2

Smoking is also closely associated with wrinkles and premature skin aging. Quitting smoking, or not taking up smoking in the first place, is one of the best preventative measures against premature aging. Smoking also stains the teeth and can hasten hair loss.1,2 Not surprisingly, in surveys of body esteem, smokers tend to rank lower than non-smokers.15

Harmful effects of smoking are largely due to the fact that smoking results in the production of compounds called free radicals, which cause the body to produce inflammatory molecules called cytokines.16 These molecules play a role in the early stages of acne formation. Studies have shown that cytokine levels are high in clogged pores and when healthy skin is exposed to high levels of cytokines, it starts to develop acne.17

A 2008 What about vaping (e-cigarettes)? A study published in 2016 in the journal Chest showed that tobacco and electronic cigarettes both increase the levels of inflammatory molecules (sNOX2-dp and 8-isoPGF2a) and decrease the levels of anti-inflammatory molecules (vitamin E and nitric oxide) in the blood. “After having smoked either a [tobacco cigarette] or an E-cigarette, significant changes in the levels of sNox2-dp, 8-isoPGF2α, Vitamin E and NO bioavailability [were found].”16

One of the ways that smoking may influence acne is by changing hormone levels. Hormones, particularly higher than normal levels of testosterone in both men and women, and imbalances of the female hormones estrogen and progesterone in women, are known to worsen acne. Studies have shown that smoking reduces levels of estrogen in women and can impair the function of the ovaries, the organs that produce estrogen. Smoking can also cause menstrual cycles to become irregular.

As with many things in life, there are exceptions to the rule. For instance, evidence is showing that smoking may actually help protect against mouth sores and rosacea. The potential positive effects of smoking are most likely from nicotine, and not from smoking itself. Nicotine by itself is not necessarily harmful. In the case of acne, the constriction of blood vessels that nicotine produces may inhibit the production of more severe forms of acne in a lucky few people.19 How and if this happens is still up for debate.