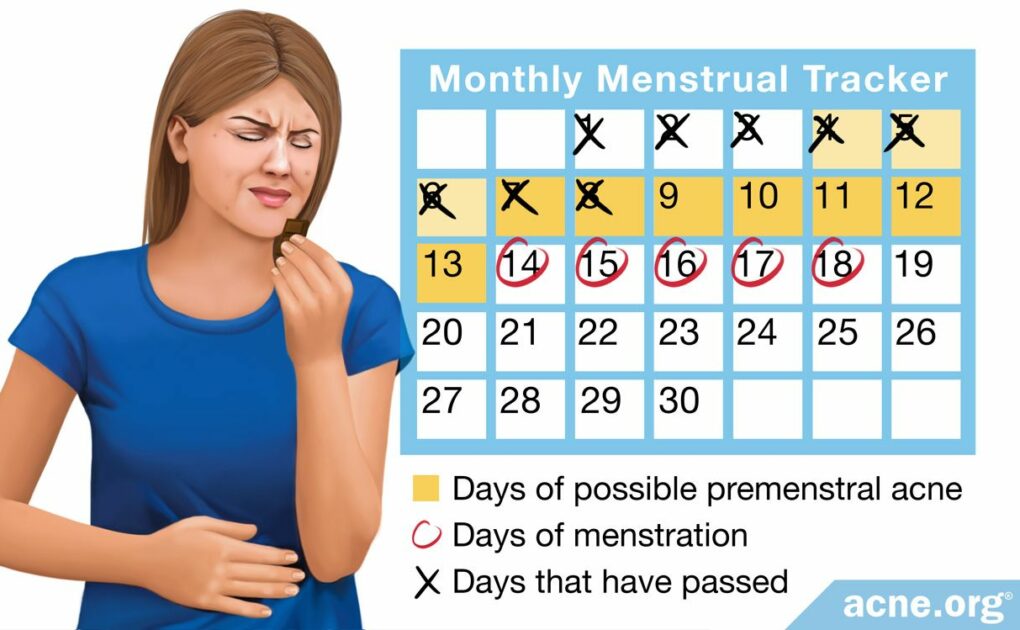 Hormone levels fluctuate during the menstrual cycle and can result in acne flares, particularly 7-10 days or so before the onset of menstruation.

Pimples from premenstrual flares tend to be inflammatory, which means they are red and sore.

The most common treatments include:

The menstrual cycle influences acne. Many women experience an acne flare approximately 7-10 days before their period, and then see improvement in their acne once menstruation starts. These cyclical acne flares result from the fluctuation of hormones during the menstrual cycle.

First let’s look at the hormones that fluctuate over a woman’s monthly cycle. Each of these hormones plays a different role in acne:

The Science: Why Does Acne Spike in the Premenstrual Window?

The primary reason why acne may occur in the premenstrual window is due to fluctuating hormones.

A 2011 systematic review published in Clinical Biochemistry looked at many studies in order to examine the role that hormones play in acne. The authors of the review found that acne was correlated with low levels of estrogen and high levels of progesterone in the blood. They speculated that low estrogen levels might indirectly lead to increased skin oil (sebum) production and increased inflammation, and thus to acne.2

Another reason why acne occurs in the premenstrual window may be due to skin pores contracting at this time, which in turn allows them to become more easily clogged, trapping skin oil (sebum) inside, and leading to acne.

A small study conducted in 1973 found that skin pores in women with acne were smallest during the premenstrual period, coinciding with an increase in acne at this time.3

The Evidence: Women Experience More Acne During the Premenstrual Window

What is clear is that acne does in fact flare in the premenstrual window, and this is backed up by multiple studies. These studies agree that among women who suffer from acne, 36-78% experience premenstrual acne flares.4-8

Another recent study looked more closely at premenstrual acne and found that acne flare-ups during this period tend to mean an increase in papules–red and inflamed acne lesions.9

So What Can Be Done About It?

Proper topical treatment of acne is normally strong enough to keep acne at bay during the premenstrual window, and comes with very few, manageable side effects. One study found that 57% of women with acne flare-ups around their period would be very likely to use a safe and effective topical treatment.8

Sometimes, doctors will prescribe birth control pills, also called combined oral contraceptives (COCs), when acne flares are especially severe, or when an oral contraceptive is desired or necessary for other reasons.

Combined oral contraceptives contain a combination of synthetic estrogen and synthetic progesterone. Research has shown that all COCs are effective in treating acne, so when it comes to premenstrual acne, there is no one proven birth control pill that is better than another.7,10

Oral contraceptives, while effective for reducing acne (on average by about 66%), come with a plethora of side effects, so be sure to have a serious conversation with your doctor before you embark upon this kind of hormonal therapy.