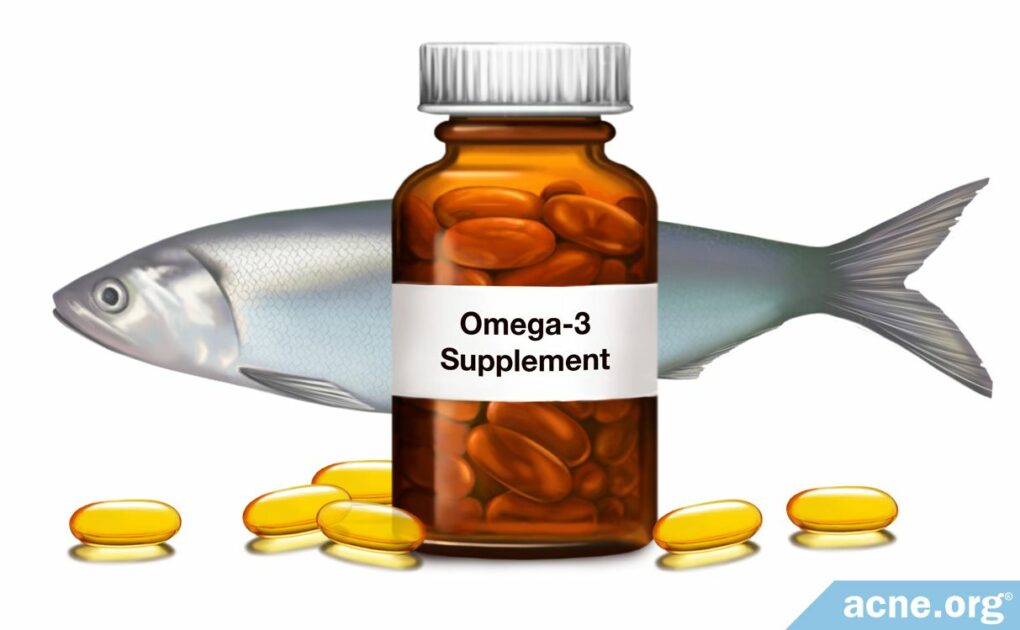 Wild, Fatty, Cold-Water Fish Is a Good Source, and So Are Fish Oil and Micro-algae Supplements

Omega-3 fatty acids are important to the body in a variety of ways, including reducing inflammation. Since acne is primarily an inflammatory disease, they could potentially play a role in helping to reduce acne.

The two most important omega-3 fatty acids, EPA and DHA, are present primarily in wild (not farmed) fish, especially in oily/fatty fish, such as tuna, salmon, mackerel, herring, and sardines. Consuming more wild fatty fish increases EPA and DHA levels in the bloodstream, but getting enough is almost impossible in today’s modern world. Fortunately, fish oil and krill oil supplements containing EPA and DHA also increase the levels of these fatty acids in the bloodstream, and are equally as effective.

Choosing a Supplement: Choose a known and trusted brand to ensure that you obtain a high-quality product, and take no more than 6 pills per day, or 3 “concentrated” pills. If you are vegetarian, try a microalgae (often simply called algae) omega-3 supplement.

From Dan: I take 5 or 6 cod liver oil pills per day because I find the science behind omega-3s to be compelling not only for acne but for health in general. I choose cod liver oil in particular because I don’t get much sun exposure and cod liver oil also contains vitamin D. A little tip I have is to put them in my freezer as soon as you buy them to maintain freshness and reduce fish oil burps.

What Are Omega-3 Fatty Acids?

When it comes to acne, EPA and DHA are the two most important ones.

Although the body needs omega-3 fatty acids, it cannot produce them itself. They must be consumed through the diet. For this reason, omega-3 fatty acids are called essential fatty acids. Despite their importance, most people consume less than 100mg per day, which is only about 1/5 to 1/18 of the recommended amount.1

Omega-3 fatty acids are important in a range of processes in the human body, such as:

Since acne is primarily an inflammatory disease, when it comes to acne, it is the regulation of inflammation that matters.

Increasing the Levels of Omega-3 Fatty Acids in the Body

Scientific recommendations for a healthy diet now include EPA and DHA. The recommended levels range from an average of 0.5g (500mg) to 1.8g (1800mg) of omega-3 fatty acids per day, or at least two servings of fatty/oily fish per week.1 Below we can see how many servings are required depending on the type of fish you consume:

In addition to the difficulty of obtaining enough of the right kind of fish, there are two other concerns:

These concerns point to the need for supplementation of omega-3 fatty acids since diet alone is not sufficient in this regard.

Supplements for Omega-3 Fatty Acids: What to Look for When Purchasing Supplements

Pharmaceutical companies responded to the therapeutic potential of omega-3 fatty acids by manufacturing fish oil-filled capsules that contain high levels of purified EPA and DHA. People can take these supplements in order to achieve and maintain adequate levels of these compounds in the bloodstream.

Micro-algae: a vegetarian option for DHA

Up to 6 pills a day is safe for adults

What if my supplement only contains EPA or DHA on its own?