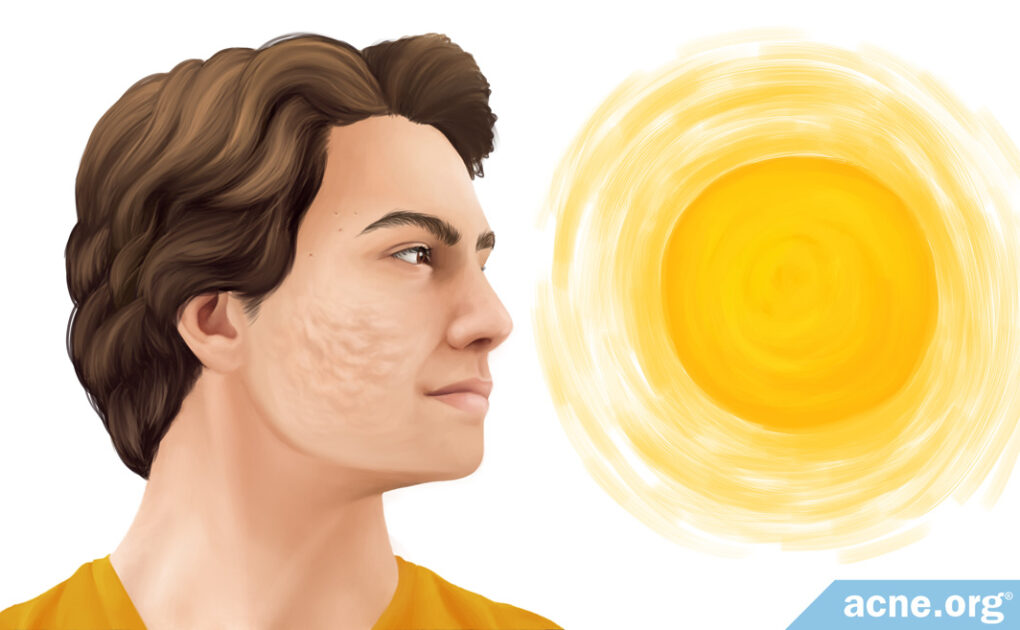 It Might, but Few Studies Have Looked at the Question

Many doctors warn patients that the sun can disrupt healing and worsen scarring. But only two small studies have investigated what sun exposure does to scars, and neither study specifically looked at acne scars. Still, here’s what the two studies found:

As you can see, results are conflicting. But since it is far better to study human skin, we should give much more weight to the second study.

The Bottom Line: Dermatologists recommend that you protect your skin from the sun to reduce scarring, and I back them up. From what we can tell from the science so far, which is admittedly weak, if you have acne and are prone to scarring, it is safest to limit your sun exposure.

As many as 95% of people who have had acne have at least some measure of scarring.1,2 Despite how common these scars are, scientists do not know much about how ultraviolet (UV) radiation from the sun influences scarring.3

Only two studies have been performed so far:

Results from these studies are conflicting.

One study performed on rabbits found that UV light reduced the size of scars. But remember, this study was done on rabbits, and not on human skin, so its results are preliminary.

One of the few studies to specifically look at scars is a 2008 study in the journal Plastic and Reconstructive Surgery that explored the effect of high-dose UV light, which is similar to the light from the sun, on scarring in eight rabbits. The study found that UV light might actually be helpful in reducing the size of scars. The scientists made four small wounds on each of the rabbits’ ears, and 15 days later exposed half of the wounds to UV light once a day for one to two weeks. The ear wounds that got the UV light resulted in scars that were 52 – 74% smaller than the scars from the unexposed wounds, suggesting that UV radiation might be helpful.4

One study was also performed on humans, and thus we should give its results more weight. It found the opposite, that UV radiation increased the size of scars.

In the randomized controlled study trial, which was published in the journal Acta Dermato-Venereologica, dermatologists made several small wounds in the buttocks of 14 men, and exposed half of those wounds to UV radiation. After 12 weeks, they found that the UV-exposed scars “were significantly though only slightly larger” than the ones that were not exposed.

A dermatologist, who didn’t know which samples were which, also rated the appearance of the scars, and consistently found that the UV-exposed ones looked worse.

The results indicate that, contrary to some of the animal findings, UV radiation may have a small but negative effect on scar appearance.3

However, because there is only this one study in humans, and the experiment tested just 14 people, it is difficult to come to any firm conclusion about what UV radiation does to scars. And because no studies have looked at acne scarring, we can’t say for sure whether UV radiation is good or bad for acne scars.

But the preponderance of the evidence we have, even though it is just starting to trickle in, would tend to point toward avoidance of the sun as a good idea if you want to limit scarring.

Even though studies are so far inconclusive, we can still look at how the sun affects various factors in the skin. This can give us a better clue on how the sun may affect acne scarring. As you’ll see as you read, however, even this evidence is mixed.

Collagen is a structural protein of the skin and is the driving force of scarring. There are two types of acne scars, and collagen is the main driver of both:

UV radiation is known to reduce collagen. This can actually happen quite quickly, within hours of sun exposure.3 Common sense would tell us that because of this, the sun might make indented acne scarring worse, but be helpful for raised scars. However, because research is limited, we do not know this for sure.

Another idea for how sun exposure might influence scarring is through inflammation. Inflammation is an immune response that can interfere with the healing process of acne lesions, and it is a major driver of scarring. Because sunburn is, by definition, skin inflammation, it could be harmful if it further prevents proper healing.3

Paradoxically, however, UV radiation can also suppress the immune system, which would mean less inflammation. After initially provoking a response, UV rays have a chilling effect, tamping down the response in the skin. This could ultimately mean reduced scarring.4

Yet another way the sun’s rays might affect scarring is by slowing down wound healing. Medically speaking, acne lesions are small wounds, and the better these wounds heal, the less scarring will result. One study in mice found that UV rays from the sun might delay wound healing.6 However, we should keep in mind that this was an animal study and the wounds in question were deep skin wounds, so it is difficult to say how much these findings would apply to the healing of acne lesions in humans.

So, as we can see, the jury is very much still out. The sun can potentially create inflammation, meaning that the sun might be bad for indented scars since inflammation can reduce collagen production. The sun’s rays might also delay wound healing, which might also contribute to worse scarring. On the other hand, the sun can suppress the immune system, which might reduce inflammation.

The Bottom Line: We Don’t Know If the Sun Is Good or Bad for Scarring, but Doctors Still Recommend Protecting the Skin

Scientists clearly need to do more research, but even the rabbit study authors, who found that UV radiation might be helpful, are not yet ready to tell people to seek out the sun if they have scars or are healing a wound. In their paper, they write, “sunscreen should still be used as primary protection when skin is exposed to direct sunlight.”4

UV radiation, along with possibly making acne scars worse, can cause sunburns and skin cancer, so it is important to protect yourself. Wear sunscreen or try to avoid excess sun exposure, and especially sunburn, if you have acne.