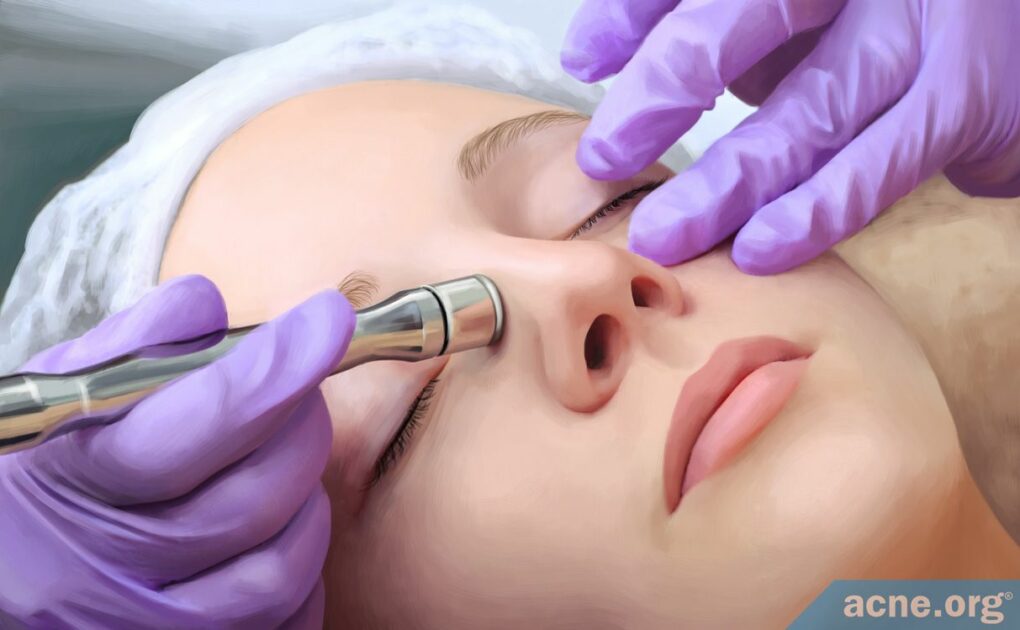 There Is No Scientific Evidence That Microdermabrasion Improves Acne, and the Irritation It Causes May Actually Worsen Acne

What It Is: Microdermabrasion is a painless cosmetic procedure that involves using a device that shoots tiny aluminum oxide particles at the skin, thus dislodging and removing surface skin cells.

Acne: Although some marketers assert that microdermabrasion can improve or prevent acne, there is no scientific evidence to support this claim. In fact, when you undergo microdermabrasion, it will cause physical irritation of the skin. Generally speaking, anything that physically irritates the skin can make acne worse. Therefore, microdermabrasion is not recommended for people who are currently experiencing breakouts.

Acne Scarring: Because microdermabrasion only removes surface skin cells, it is unlikely to provide any benefit for acne scarring.

My Take: I would advise anyone with acne-prone skin to avoid microdermabrasion. It is physically irritating to the skin, which means it may lead to more acne. However, if you never break out, have some extra money, and want to undergo a fun procedure that will give you a temporary “glow,” go for it.

Caution – Don’t Undergo Microdermabrasion while on Isotretinoin: Isotretinoin, an oral acne medication, makes the skin much more vulnerable and delicate, so is recommended to wait at least one (1) year after stopping isotretinoin before undergoing microdermabrasion.

Microdermabrasion is a cosmetic beauty procedure that aims to rejuvenate the skin by using a device that sprays the skin with tiny aluminum oxide crystals, which removes dead skin cells from the skin surface.

If you suffer from acne, you may wonder whether microdermabrasion could improve your acne, as some marketers claim. On the other hand, you may be concerned that the procedure could actually make your acne worse by irritating the skin. In reality, there is no evidence that microdermabrasion has any effect at all on acne, either positive or negative.

While microdermabrasion is unlikely to reduce or prevent acne, as a beauty treatment, it does lead to minor improvements in the appearance of the skin, helping the skin to look smoother, softer, and brighter after the procedure. To see these benefits, most people need between 5 and 16 treatments (6 – 10 is typical), each of which is painless and lasts about 30 – 60 minutes.

Zooming in on the stratum corneum

When any exfoliant removes surface dead cells, this can signal deeper layers of the skin to produce more skin cells to replace those lost at the surface. If microdermabrasion were to help reduce acne, this is how it might do so. By signaling the production of new skin cells, old skin cells have less of a chance to “hang around” and become stuck together, creating a clog.5 However, will the physical irritation that microdermabrasion causes negate the potential benefits of exfoliation when it comes to acne?

The Research: Microdermabrasion Has Not Been Shown to Improve Acne

To date, only one small and deeply flawed research study has been performed on microdermabrasion and acne. It purports to show that microdermabrasion improves acne. The study was published in 2001 in the journal Dermatologic Surgery,6 but its conclusions are unreliable.

In the study, 24 participants with acne received eight microdermabrasion treatments over the course of two months. The researcher used photographs to compare the severity of the participants’ acne before and after the treatments. At the end of the experiment, 38% of the participants showed excellent results; 34% showed good results; 17% showed fair results, and only 12% exhibited poor results. The researcher concluded that microdermabrasion is a promising procedure for the treatment of acne.6

Flaws in this study:

Next, rather than counting the number of lesions, the researcher also used an imprecise method of gauging results, simply described the results as “excellent,” “good,” “fair,” or “poor.” This vague description does not provide any specific information about how much the participants’ acne improved. However, the main issue remains that any improvement may have been caused by the medications and not the microdermabrasion treatments.

Because of the problems with this study, another doctor, Dr. Gary Palmer, wrote a letter to the editors of Dermatologic Surgery, which was published in the journal later the same year.7 In his letter, Dr. Palmer listed the flaws in the study and concluded, “I was amazed this article was approved…As far as I am concerned, this study proves nothing…[It] is completely meaningless.”7 In other words, we cannot consider this study as evidence that microdermabrasion improves acne.

Some marketers claim that microdermabrasion can help to reduce scars caused by acne. This is highly unlikely, since microdermabrasion only affects the very surface-most skin cells, while acne scars go much deeper and involve the rest of the epidermis and dermis. While microdermabrasion may help the skin temporarily produce more collagen and elastin, it is extremely unlikely that this will produce any noticeable or lasting effect on acne scars, and the research conducted so far backs this up.1-3 Instead, there are other effective acne scar treatments that can help.

It is possible that rather than improving acne, microdermabrasion could actually make acne worse by causing physical irritation to the skin.

Many things that physically irritate the skin can trigger acne. Some examples of physical irritants include:

Doctors do not recommend the procedure to people who already have active acne.9 In other words, microdermabrasion should be looked at as a beauty treatment for people who are not prone to acne, and not an acne treatment itself.

Since there is no evidence that microdermabrasion improves acne, and it is even possible that the procedure can make acne worse, you may wonder why anyone would consider undergoing this procedure. But if we look at microdermabrasion simply as a cosmetic procedure unrelated to acne, there are some benefits.

In addition, research has shown that microdermabrasion can improve sun-damaged skin, fine wrinkles, and age spots.11 Because microdermabrasion removes dead skin cells from the skin surface, people often report that their skin starts to look more radiant after treatment.10

Microdermabrasion is painless and does not require anesthesia. People describe it very much like what it is…very fine crystals, like a very fine sand, being moved across the skin, and vacuumed back up. You can feel it, but it is not painful. The procedure usually takes 30 – 60 minutes.

Your skin will be pink after the procedure, and this pink hue will fade after a few hours. People often describe it as a sunburned or wind-burned look. Your skin will most likely feel more sensitive after treatment, so exercise caution when applying topical treatments in the hours following microdermabrasion.

How Many Sessions Are Required, and How Often?

To achieve the smooth and more youthful look that microdermabrasion promises, 5 – 16 procedures are required (6 – 10 is typical), spaced one to four weeks apart.10

How Much Does Microdermabrasion Cost?

In the U.S., it usually costs from $75 – $200+ per session, which is a wide range. When you factor in a that you can get anywhere from 5 – 16 sessions, a full course could potentially cost $375 all the way up to $3200. For the typical 6 – 10 treatments, the range would be $450 – $2000. The cost of a session depends on what type of professional performs the procedure, how long each session takes, and regional price differences around the country.

Who Can Perform Microdermabrasion?

The History of Microdermabrasion

The early 20th century saw the development of a new procedure called dermabrasion, not to be confused with microdermabrasion. Unlike microdermabrasion, dermabrasion is a surgical procedure that requires an anesthetic. In dermabrasion, a dermatologist or plastic surgeon removes the entire epidermis and the upper portion of the dermis using a device like a wire brush, a diamond wheel, sterilized sandpaper, or another mechanical tool. While dermabrasion can reduce the appearance of scars, it can also cause various complications, and because the procedure is so invasive, the skin takes six to nine months to completely heal afterwards.12

In 1985, two Italian doctors, Dr. Marini and Dr. Lo Brutto, developed microdermabrasion as a less aggressive, painless alternative to dermabrasion. Unlike dermabrasion, microdermabrasion does not require anesthesia. Another doctor, Dr. Monteleone, presented the new technique to the medical community at the Third Meeting of the Southern Italy Plastic Surgery Association in 1988. After this, microdermabrasion spread throughout Europe during the late 1980s and mid-1990s, until eventually Mattioli Engineering introduced the procedure to the U.S. market in 1996.12