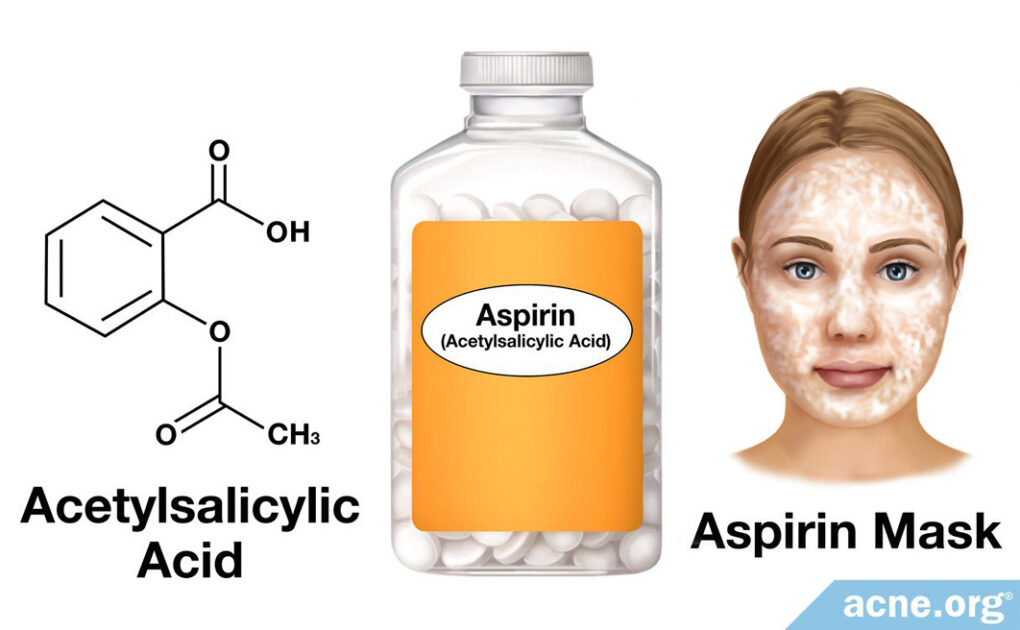 It Can Hypothetically Help A Bit, but Is Dangerous. Buy Over-the-counter Salicylic Acid Products Instead.

When dissolved in water, aspirin breaks down into salicylic acid, which you may have seen listed as an active ingredient on over-the-counter acne products before. Salicylic acid has skin-shedding and anti-inflammatory properties, and can help reduce acne symptoms.

In an attempt to treat their acne at home, some people try dissolving aspirin and applying it as a mask. This is risky and unnecessary.

Why It’s Risky: Salicylic acid can cause skin burns and even life-threatening systemic complications when applied in too high a strength. This is why salicylic acid is only available over-the-counter in up to 2% strength. It is difficult to control your dosage of salicylic acid when dissolving and applying aspirin at home.

Aspirin is one of the most widely used drugs in the world. It was created from a plant-derived chemical called salicylate, which people frequently used in the 18th century to reduce the fever, pain, and inflammation caused by diseases such as rheumatic fever and rheumatoid arthritis. However, salicylate caused side effects that often would prevent people from using it. Therefore, in 1895, Frederick Bayer of Bayer pharmaceuticals altered the chemical structure of salicylate to create a new form of salicylate that did not cause side effects. With these alterations, salicylate became acetylsalicylic acid, which is more commonly known as aspirin.1

The structure of aspirin (acetylsalicylic acid) is similar to that of salicylic acid, which is an acid very commonly used in the topical treatment of acne. In fact, when aspirin is placed in water, it breaks down into:

For this reason, some people try dissolving aspirin pills in water at home and applying the watery paste to their skin in an attempt to help reduce acne.

Because of the similarities between aspirin and salicylic acid, it is likely that aspirin may provide the same effects as salicylic acid when dissolved in water and applied topically.2,3,4

However, for safety reasons, salicylic acid is allowed in strengths up to 2% in over-the-counter products in the United States. Anything higher than this must be administered by an esthetician/cosmetician, nurse, or doctor.5,6 Because dissolving aspirin in water at home is unscientific, and aspirin tablets may vary in their ability to release salicylic acid, it is possible to obtain amounts of salicylic acid that are higher than the legal limit allowed over-the-counter. While this may sound like it would make it more effective, it can be dangerous for the following reasons:

To know whether dissolved topical aspirin is effective or not, we would first need clinical trials, but there are no direct trials as such on acne, so we cannot say for sure whether topical aspirin will have effects similar to topical salicylic acid.

When it comes to oral aspirin, research suggests that it might help with several skin conditions, including vitiligo and melanoma.7 However, no studies have looked at either oral or topical aspirin as an acne treatment.

Side Effects of Salicylic Acid and Topical Aspirin

Research on controlled and small doses of topical aspirin has found it to be a relatively safe drug. The same is true of salicylic acid. At over-the-counter dosages (less than 2%), salicylic acid causes only mild dryness and peeling in up to ⅓ of people who use it.8-11

For this reason, it is best to simply purchase over-the-counter salicylic acid at a safe percentage, up to 2%, and eliminate the trouble and risk of dissolving aspirin pills. Salicylic acid products are readily available at every drugstore and tend to be inexpensive.