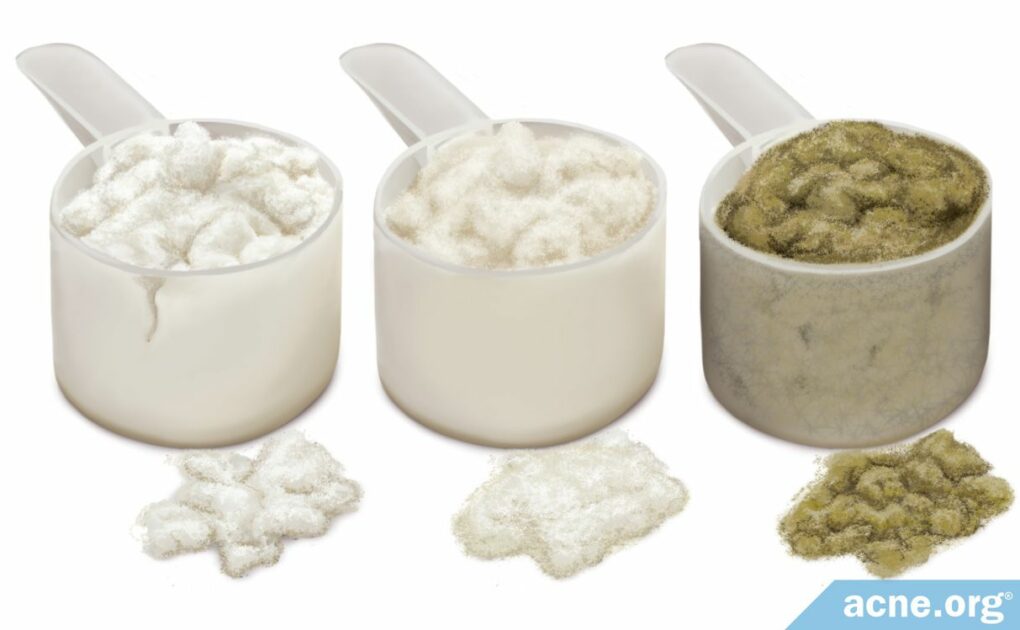 Perhaps. Specifically, the Calories in Protein Shakes May Increase Acne.

Protein shakes are obviously high in protein but they are also often high in calories. The strongest evidence we have at our disposal that could potentially link protein shakes with acne focuses not on the protein itself in protein shakes, but on calories as a whole. Several studies have shown that a high-calorie diet can increase hormone levels in the blood, which could then hypothetically lead to acne. So if you just started “bulking up” and added protein shakes to your diet, it might be the extra calories, and not the protein shakes themselves that are leading to a few more zits.

When it comes to protein itself, a few studies have shown us that when protein intake increases, a hormone called IGF-1 may also increase, which could then hypothetically lead to a worsening of acne. However, more direct evidence would be needed before we vilify protein as something that leads to acne.

The Bottom Line: If you are breaking out and have recently started “bulking up” with protein shakes, it is more likely that the increased calories might be what’s leading to acne more than the protein shakes themselves. As with most things in life, moderation is the name of the game. If you enjoy a protein shake from time to time, don’t stress yourself out about it. It should be fine.

The following image presents ways that protein shakes might contribute to acne. The keyword here is “might,” because none of these things are proven. Generally speaking, all things in moderation is a good rule of thumb. If you are breaking out and have recently started drinking lots of protein shakes, you may want to cut back a bit. But don’t stress out about it too much.

Athletes following an intense gym schedule, especially those who are trying to “bulk” or gain muscle mass, often consume protein shakes. There are several possible ways in which protein shakes might contribute to acne.

Let’s look at each of these three possibilities and weigh the evidence, starting with the most logical explanation for why protein shakes might contribute to acne–an increase in calories in the diet.

Fair warning: This is going to start getting into some deep science. If you’re looking for the short answer to whether protein shakes cause acne, the answer is probably not to any measurable degree by themselves, and you shouldn’t be afraid to have a protein shake from time to time. It is more likely that it is the calories in protein shakes that might lead to more acne, and not the protein itself.

Can a High-calorie Diet Cause Acne?

So if we assume a high calorie diet can potentially increase levels of insulin and IGF-1 in the blood, how might that affect acne? For this, the answer is more straightforward. An increase in insulin and/or IGF-1 can lead to an increase in androgens (male hormones found in both males and females), and androgens are well known to lead to more acne in both males and females. Since people who consume protein shakes often add the shakes to their usual diet, their total calorie intake may increase, and this hormonal cascade, and increased acne, may follow.

The following two recent articles published in 2016 show us that a rise in insulin and IGF-1 may worsen acne.

But what about the protein itself? Can increasing the amount of protein in the diet, independent of increased calories, also lead to more acne? Let’s have a look at that next.

Can a High-protein Diet Cause Acne?

In addition to being high in calories, protein shakes are, obviously, high in protein.

Additional evidence that a high-protein diet increases IGF-1 levels comes from an article published in 1997 in the journal Osteoporosis International, which shows that when people take in less protein, their IGF-1 levels drop.6 So, once again we can infer that the opposite would be true, that more protein would lead to increased IGF-1 levels.

So, It is possible that a high-protein diet increases IGF-1 levels, and this could start a hormonal cascade that could increase acne, but because this evidence is indirect, and only shows us about how protein can affect one particular hormone in the body, we should proceed with caution and not draw any conclusions until more rigorous research is performed.

Next, let’s look at the milk proteins that are often found in protein shakes–whey and casein–and see if we can uncover any more evidence.

Can Milk Proteins like Whey and Casein Cause Acne?

Scientists have also begun exploring how the two specific protein supplements often found in protein shakes–whey and casein–affect hormones and acne. Some evidence is trickling in that is learning toward the possibility that these proteins might lead to an increase in insulin and/or IGF-1, and perhaps to an increase in acne. However, it is too soon to draw any definitive conclusions, particularly because the studies performed did not control for calories.

Both whey and casein are protein components of cow’s milk:

Let’s have a look at each of them one by one.

Can Whey Protein Cause Acne?

Whey protein is the most popular protein supplement taken by athletes, and usually comes in one of two forms.

Small, initial studies on whey protein seem to point toward a potential increase in insulin, and perhaps an increase in acne. However, none of the studies controlled for calorie intake, so we cannot say for sure whether the results are from the protein itself or from an increase in calories.

In addition to these preliminary studies, three published case reports have described teen and adult males developing acne after adding whey protein supplements to their diet. Case reports are the least rigorous type of scientific evidence, because they simply describe what happened to a few people but cannot explain how or why it happened.

The case reports describe a total of 16 male weightlifters who developed acne after they started taking whey protein supplements for bodybuilding.10-12 It is important to note that this does not prove that whey caused their acne. There were too many other uncontrolled factors, such as the total calories they were consuming and their level of physical activity. We need more studies directly testing whether supplementing with more whey really leads to more acne.

Can Casein Protein Cause Acne?

Casein protein is less popular than whey, but some supplements do contain casein protein. Plus, the more we learn about the various types of proteins, the more we might be able to generalize and make some conclusions on whether protein in general might lead to more acne.

In one small experiment, researchers found that consuming casein tended to increase the amount of IGF-1 in the blood of 8-year-old boys. The authors of the article wrote, “In the casein group…IGF-1 increased by 15%, whereas there was no change in… insulin.”7 Because we have only this one small study performed on children, this is only a tiny additional clue.

Summing up the results of the studies on whey and casein, we do not have enough evidence to conclude that they cause acne. Although some preliminary evidence suggests that whey and casein increase the levels of insulin and IGF-1 in certain people, which could hypothetically lead to acne, there is very little reliable direct evidence that this occurs. In other words, don’t be afraid of whey or casein protein at this time, but as with all good things in life, it may be best to consider moderating your intake.

What about “Weight Gainer” Shakes? Can They Cause Acne?

Instead of protein shakes, some people–particularly bodybuilders or people who are looking to increase calorie intake easily–may turn to meal replacement products known as “weight gainers.” Weight gainers usually consist of:

Weight gainers, as their name implies, contain lots of calories, and as we have already discussed, increased calories may lead to more acne. But there is one other potential concern when it comes to weight gainer shakes. They often contain large amounts of sugar as well, and some studies have shown that high-sugar diets may increase acne.13,14

The Verdict on Protein Shakes and Weight Gainers

Protein shakes: There is some evidence that protein shakes might trigger acne formation, but this is probably due to their high-calorie content more than the protein itself. There is no scientific smoking gun that would lead us to conclude that acne-prone people should eliminate protein shakes. Instead, moderate your intake and you should be fine.