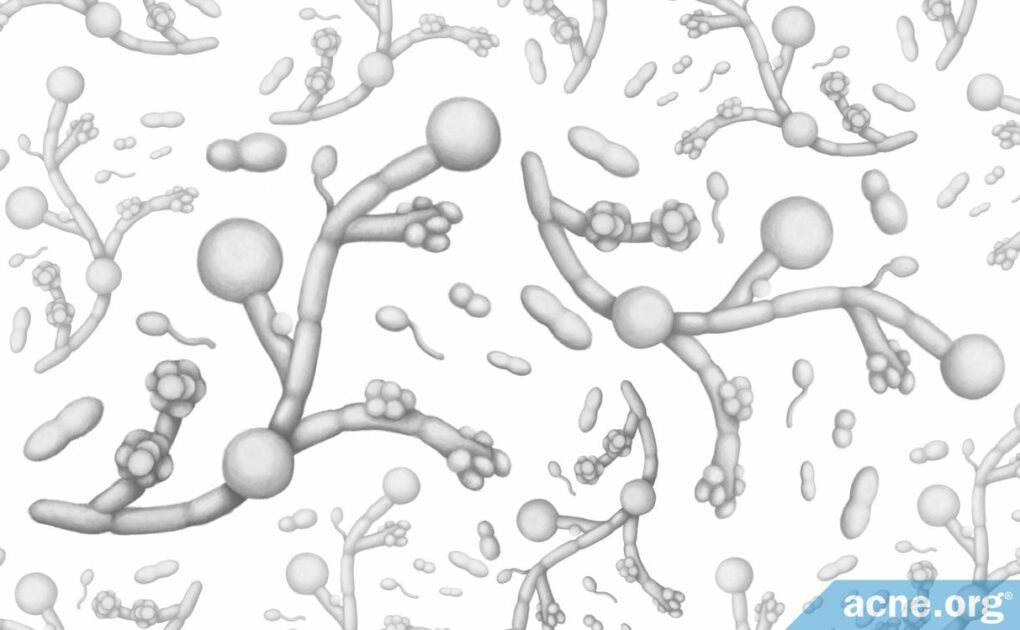 Candida is a yeast (a single-celled type of fungus) that lives on the bodies of about 70% of people. For most people, Candida does not cause any problems, but it can occasionally lead to serious infections in people whose immune systems are weakened.

Although Candida can sometimes cause skin infections, these infections do not resemble acne and are usually not located on the face.

There is not enough evidence that Candida can cause acne or make acne worse. If any practitioner is telling you otherwise, proceed with extreme skepticism, and don’t get roped into flimsy Candida treatments that cost money.

Recently, a number of practitioners of natural and holistic medicine have put forward the claim that Candida is behind many common health problems, including acne. These practitioners suggest that by taking naturopathic supplements that prevent Candida overgrowth, a person can successfully treat acne. However, there is not enough scientific evidence to support this claim. When it comes to the skin, Candida normally only causes problems in body folds, nail beds, and finger webs–that is to say, in places where acne does not occur.

Candida is a yeast. Yeasts are single-celled organisms and are a kind of fungus.

Although there are over 150 species of Candida, the type found on/in most humans is Candida albicans (C. albicans). Around 70% of people have this yeast living on/in their bodies.

C. albicans is a microscopic organism – it measures about two to six microns (μm) in diameter–which means it would have to be magnified approximately 50 times to be visible to the naked eye.

Candida is called an opportunistic pathogen. This means that it usually does not cause problems in healthy people, but if a person’s immune system is weak, the yeast takes advantage of the opportunity to cause an infection.

In most healthy people, C. albicans lives either on the skin, on the lining of the genitals, and/or on the inner lining of the intestines. Normally, the body’s immune system fights off Candida and does not allow it to penetrate the skin or overgrow.

According to an article published in the journal Trends in Immunology in 2016, “Under normal circumstances, the fungus does not cause disease.”2

When it comes to the skin, when the immune system is weak, such as in HIV-infected people, Candida can “squeeze” itself through the skin and get inside the tissues of the body, where it grows and multiplies. This invasion and overgrowth is what we call an “infection.”1,2

There Is No Direct Evidence Linking Candida to Acne

The only evidence establishing any kind of possible link between Candida and acne is extremely weak.

One study looked at skin samples from 70 acne patients in India and found a total of 11 different species of Candida in these samples. This in itself does not prove that the Candida had anything to do with the patients’ acne. However, the study authors speculated that the yeast might have intensified the inflammation already present in acne, potentially worsening the patients’ symptoms. However, this is merely a speculation that requires proof.3

Additionally, one study looked at 15 Japanese acne patients and found that patients whose acne was more severe tended to have more yeast in their skin. However, the yeast in these patients’ skin was not Candida, but rather a different type, called Malassezia.4 In other words, this evidence does nothing to support the claim that Candida in particular might contribute to acne.

Why Candida Probably Cannot Cause Acne

There is not enough scientific evidence that people with acne experience an overgrowth of Candida, or that Candida causes acne lesions in any way.

Acne commonly develops on the face, neck, and back. On the other hand, Candida usually does not live on the skin of exposed areas like the face, because it needs a relatively high-moisture environment to survive. Such environments include body folds, nail beds, and finger webs.1

Moreover, acne lesions develop in skin pores, where there is no oxygen. Candida needs oxygen, so it cannot live in skin pores.

Lastly, acne is a chronic condition, whereas a Candida infection is usually transient. If Candida penetrates the skin and causes an infection, the body’s immune system normally can fight and kill it, even in people with weakened immune systems. If the immune system is very weak, such as in a person with AIDS, anti-fungal medication is usually effective against Candida. All of this demonstrates that Candida likely has nothing to do with causing acne.

The most common types of Candida infections occur in the lining of orifices like the mouth and genitals. Candida can also cause the following relatively common skin infections:

It is important to note that none of these skin infections caused by Candida looks anything like acne or is located on the face.

In rare cases, Candida enters the blood and causes severe systemic infections (infections that spread through the bloodstream to the whole body). This leads to a potentially fatal condition called candidosis, which shows a high mortality rate in people with very weak immune systems, such as people who have AIDS or are undergoing chemotherapy.1,2

Older people are more likely to develop Candida infections. Other risk factors include:

Candida Infections in People with Acne Who Take Antibiotics

While it is controversial and often ineffective, some dermatologists still prescribe antibiotics to treat acne. Unfortunately, people who take antibiotics for their acne are more prone to developing Candidadysbiosis (an imbalance in the kinds of microbes – bacteria and fungus – living inside the body).

As previously stated, the growth of Candida in the body is kept at bay by “good” bacteria that lives in the same places as Candida and competes with it for space and food. When a person takes antibiotics, these antibiotics target bacteria, but do not harm Candida because it is a fungus. Therefore, the antibiotics kill much bacteria, including the good bacteria, which leaves Candida with more space and food.1,5 This is how long-term antibiotic treatments can result in a Candida infection as a complication. However, it is important to note that these infections do not resemble acne and generally do not occur on the face.

Candida is a fungus that is present in 70% of people. While it is harmless to most people, it can cause an infection when the immune system is weakened. The most common types of Candida infections occur in the lining of orifices, and more rarely on the skin. These skin infections do not resemble acne and are not related to it. To date, there is not enough evidence that Candida is connected with acne. However, a person who takes antibiotics for their acne may develop a Candida infection.

Beware of “natural” or “holistic” practicioners who push Candida remedies to clear acne. Don’t get swindled.