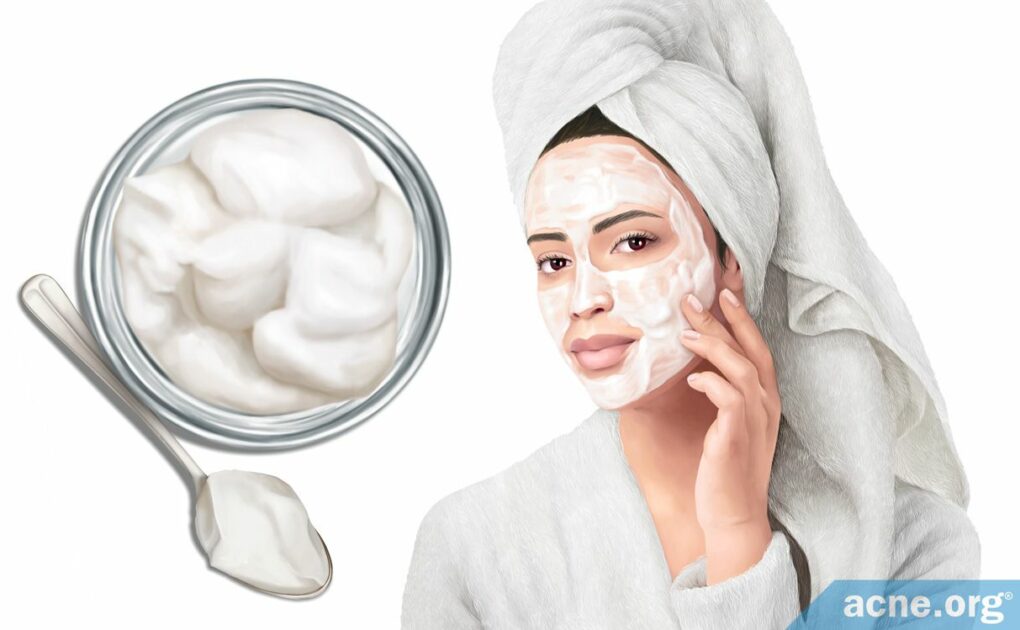 Perhaps to Some Degree, but More Research Is Necessary Before We Can Recommend It

It’s possible, but still unproven, that applying yogurt in the form of a topical facial mask might help reduce acne to a small degree.

This is because yogurt has 2 things going for it:

So does that mean applying yogurt to your skin will clear acne? Most likely not to a remarkable degree, but it’s not out of the realm of possibility that it might help a little bit. The available evidence is mostly indirect and no clinical studies have tested topical yogurt treatments on people with acne, so we can’t say for sure.

Many standard acne treatments come with unfortunate side effects, making acne sufferers eager for alternative home remedies. Yogurt masks are one such remedy, and while the idea of a yogurt mask shows some promise, there is currently not enough scientific evidence to say that yogurt works against acne. It is also important to keep in mind that even if it does work, it likely would only work to a modest degree.

Let’s have a look at exactly what yogurt is and what it contains to see if we can unpack some clues so we can determine whether it might help.

Yogurt is a fermented milk product made by adding bacteria called yogurt cultures to milk.

Yogurt shows some potential as an acne treatment because it contains two medicinal components:

Researchers have not tried applying yogurt to the skin of people with acne, but they have applied beneficial bacteria and lactic acid with some promising results.

So, from this limited evidence we have, it looks like applying yogurt topically to the skin might help a bit.

Here’s how to apply a yogurt mask if you want to give it a go. However, don’t look for dramatic improvement in your acne. If you have acne that really bothers you, you will likely be better served looking into more proven acne treatments.

How To Apply A Yogurt Mask

Diving Deeper into the Science: Exactly How Might Topical Yogurt Improve Acne?

To understand why some scientists think yogurt might improve acne, we first need to take a look at how acne develops.

Now we know the factors involved in acne formation. Here’s how the beneficial bacteria and lactic acid in yogurt might help:

Now let’s delve deeper still, taking a closer look at each of these medicinal properties of yogurt. By the time you’re done reading this, nobody will be able to say you don’t know what’s up when it comes to topical yogurt and acne!

Unfortunately, no clinical trials have tested yogurt to see if it reduces inflammation in people with acne. However, studies conducted in vitro (in a petri dish) show that one bacterium found in yogurt, called Lactobacillus, does possess anti-inflammatory properties.

According to an article published in the journal Beneficial Microbes in 2014, “Several strains of Lactobacillus…demonstrate anti-inflammatory properties.”8

The human body contains special substances called antioxidants, which find and remove harmful free radicals (oxidants) that naturally form in the body. Both the beneficial bacteria as well as lactic acid found in yogurt can act as antioxidants, helping prevent free radicals from building up and damaging the skin.9,10

Medically speaking, acne lesions are small wounds. To date, no studies have tested whether applying yogurt to the skin can help acne lesions heal faster. However, research involving animals shows that topically applying beneficial bacteria like that which is found in yogurt can speed up wound healing.11

The outer layer of our skin functions as the skin barrier. This barrier is our skin’s armor, keeping in moisture and protecting our skin from harmful bacteria, sun damage, and toxic chemicals in our environment.

People with acne tend to have an impaired skin barrier. Three studies have found that applying beneficial bacteria from yogurt to the skin might help repair the skin barrier.12,13

What about Eating or Drinking Yogurt?

To understand whether ingesting yogurt would potentially help with acne, let’s look at a theory called the gut-brain-skin theory. Briefly, the theory states that the health of the intestines affects the health of the skin.

When it comes to acne, we have some evidence that this theory might be true. Three studies have found that eating yogurt or taking yogurt culture supplements did in fact help improve acne to some degree.14,15

To sum up, yogurt holds some promise as a home treatment for acne because two of its components, beneficial bacteria and lactic acid, possess medicinal properties. Some preliminary studies suggest that separately applying helpful bacteria and lactic acid to the skin might improve acne. However, until scientists test topical yogurt treatments on people with acne, it is impossible to say whether this home remedy really works against acne.