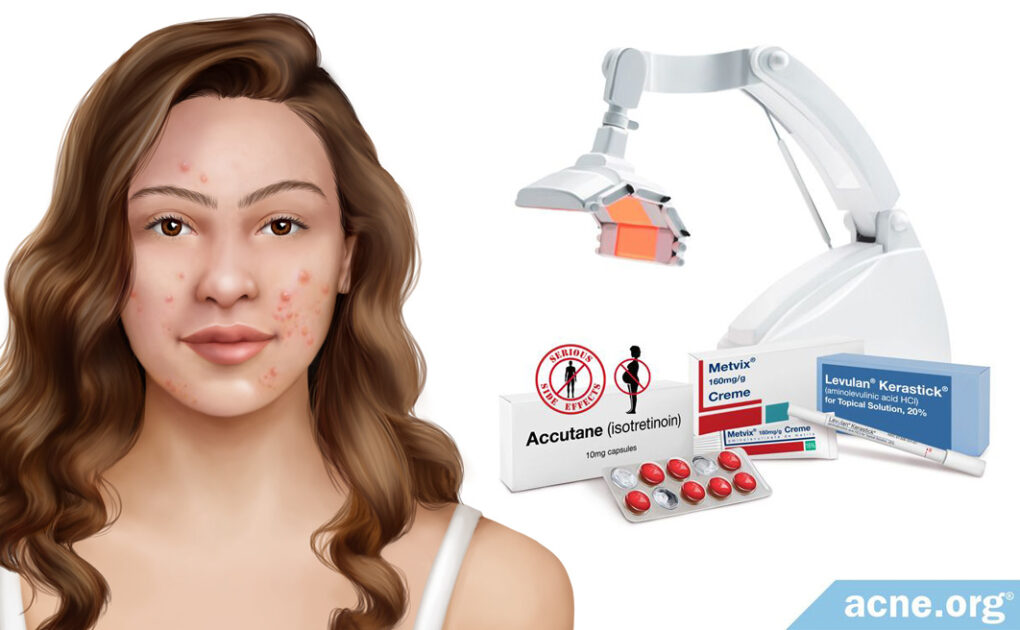 As people age, the skin produces less skin oil. This begs the question whether acne medications and treatments that work by impairing skin oil production might also lead to aging.

The following medications and treatments all work by impairing skin oil production, potentially on a long-term basis. Due to a lack of long-term follow-up studies, we don’t know whether they lead to premature aging, but it is something to consider.

The Bottom Line: Because we do not know if these medications and procedures will lead to premature aging or other problems, proceed cautiously when looking into how to treat your acne. If you have severe, widespread, and scarring acne, the side effects of these treatments may be worth it, but if you have mild-to-moderate acne, or severe acne that is not causing scars, other treatments may offer clear skin without sacrificing the health of your skin in the long term.

The medical term for skin oil is sebum. Sebum is important when it comes to acne because, generally speaking, more sebum means more acne.

This is why some anti-acne medications and procedures aim to permanently reduce sebum production. However, we still don’t know whether permanently impairing the skin’s ability to produce sebum might prematurely age the skin.

Two changes happen naturally to sebum as people age. We can see that isotretinoin, photodynamic therapy, and laser therapy can at times mimic these changes.

Let’s have a deeper look now at each of these medications and treatments to determine exactly what this means in terms of their potential to affect skin aging.

As we can see, there is a strong possibility that isotretinoin mimics some of the changes that happen to sebum as people age. In other words, by reducing sebum and changing its composition, isotretinoin might promote faster skin aging.

On the other hand, several studies have found that isotretinoin may actually reduce other hallmarks of skin aging, such as fine wrinkles and changes in skin coloration and texture.1-3

When it comes to photodynamic therapy and laser therapy, the evidence is weaker, but it is still a possibility that these two treatments might reduce sebum in ways that mimic skin aging.

When it comes to whether photodynamic therapy and laser therapy might change the composition of sebum, we have no data to pull from, so we really just don’t know.
___

Now let’s look more closely at the two changes that happen naturally to sebum as people age. While we don’t know for sure exactly how various medications and treatments might mirror these changes, I will keep abreast of the latest research and let you know anything new that comes out.

Amount of sebum produced can decrease

Research has found that as both men and women age, the amount of sebum their skin produces decreases. However, the age at which this occurs differs between men and women.

Composition of sebum can change

Sebum is made of various fats, oils, and waxes, and the chemical makeup changes as we age, specifically when we look at the fats in sebum.

There are two main classes of fats in sebum:

From birth to age 20, the amount of branch-chain fatty acids decreases. At age 20, in both men and women, the levels begin to increase again until around 50 years of age. It is unclear whether these changes impact skin aging.5,6

As people age, the amount of sebum the skin produces can decrease, and the composition of sebum can change. These changes lead us to wonder if acne medications and treatments that either reduce sebum production or change sebum composition can result in premature skin aging. Because the answer to this question is unclear, so it is an important factor to consider when choosing a medication or treatment.