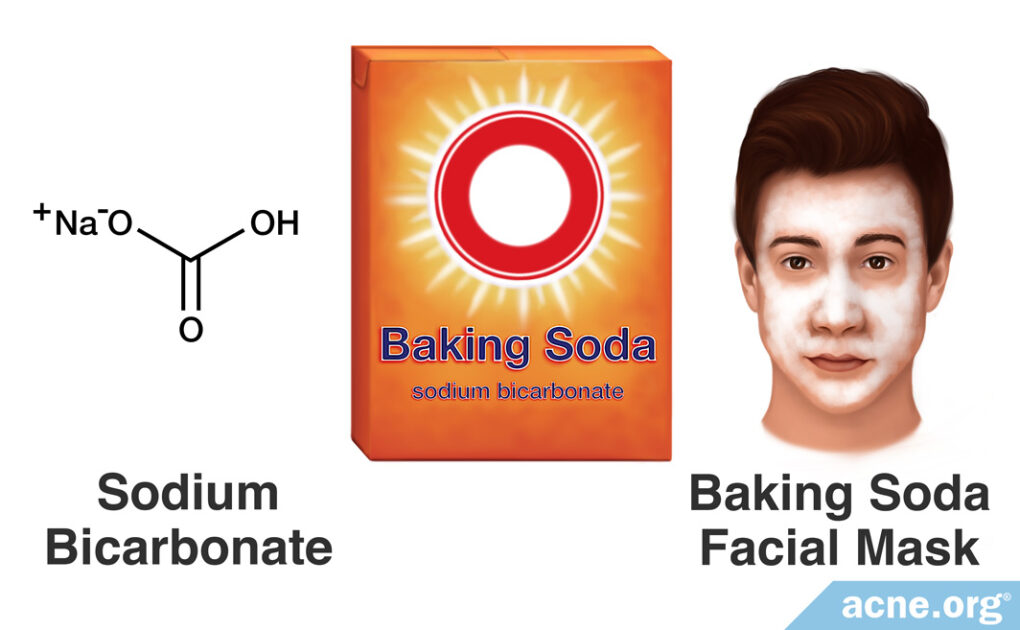 Reasons to Use Baking Soda for Acne

Reasons Not to Use Baking Soda for Acne

The Bottom Line: When we take the evidence as a whole, it is most likely best to avoid using baking soda on acne-prone skin.

Baking soda, also known as sodium bicarbonate (NaHCO3), is a common household product used in baked goods, toothpaste, for cleaning, odor control, and sometimes even as an antacid. Many people also wonder if it might help with acne by mixing it with water and applying it as a paste on acne-affected areas.1

Scientists have never performed a study directly on whether baking soda might help with acne. The only clinical evidence we have regarding baking soda and skin disease comes from one study where researchers looked at whether topical application of sodium bicarbonate would help with symptoms of psoriasis, which is a different skin disease from acne, but has some commonalities such as redness and impaired skin function. The study found that applying sodium bicarbonate to the skin had no beneficial effect on psoriasis.2

Since we only have that small bit of underwhelming evidence from clinical studies, let’s dive deeper and have a look at studies investigating the properties of baking soda and try to infer how these properties may impact acne. As we will see, while baking soda may have a weak antibacterial effect, as a whole, the evidence shows us that acne-prone people should most likely avoid using it on their skin.3-4

The three most commonly studied properties of baking soda are:

Let’s have a look at these one by one.

Acne is a disease that is made worse by the bacteria C. acnes. There are no studies to evaluate whether baking soda has antibacterial effects on C. acnes.

However, a 2005 study published in the Journal of Dental Hygiene evaluating baking soda in toothpaste demonstrated that baking soda has weak antibacterial properties against the bacterium S. mutans, which is a bacterium of similar class and characteristics as C. acnes. In the study, baking soda was not able to kill S. mutans, but showed potential in limiting its growth.

When compared with many other compounds that can kill bacteria, simply limiting the growth of bacteria is unimpressive. So even though baking soda might limit the growth of <C. acnes bacteria, this is cause for limited hope.

Baking soda acts as an abrasive, which means that it is able to remove substances that are stuck on a surface. For instance, in toothpaste, the abrasive nature of baking soda is used to remove plaque buildup on teeth.

When used on the skin, the abrasive quality of baking soda acts as an exfoliating agent to remove dead skin cells. Acne is formed through the accumulation of substances, including dead skin cells, in the pores. Theoretically, if you exfoliate the surface of the skin in a non-irritating way this can signal the skin underneath to produce cells more quickly, which can help prevent clogs.4,5

However, the key is to exfoliate in a non-irritating way. When it comes to baking soda, its abrasive quality means it is potentially irritating to the skin. It is well-known that anything that irritates the skin can cause more acne. Therefore, exfoliating the skin with baking soda could cause irritation and potentially make breakouts worse. Instead of physically exfoliating with an abrasive like baking soda, it is far more effective to exfoliate chemically with an acid, like glycolic acid, which is non-irritating and has been proven to help with acne.

This means that when used on the skin, baking soda may cause the skin to become more alkaline. Some skin care bloggers suggest that using alkaline skin products will make the skin healthier, but this is not true. For ideal skin health, and prevention of acne, the pH should be left unchanged.

In short, since using baking soda on the skin can raise its pH, this is very likely a bad idea when it comes to acne.

The weak antibacterial activity of baking soda is unlikely to significantly improve acne, and its abrasive nature and alkaline pH may in fact lead to more breakouts, not less.