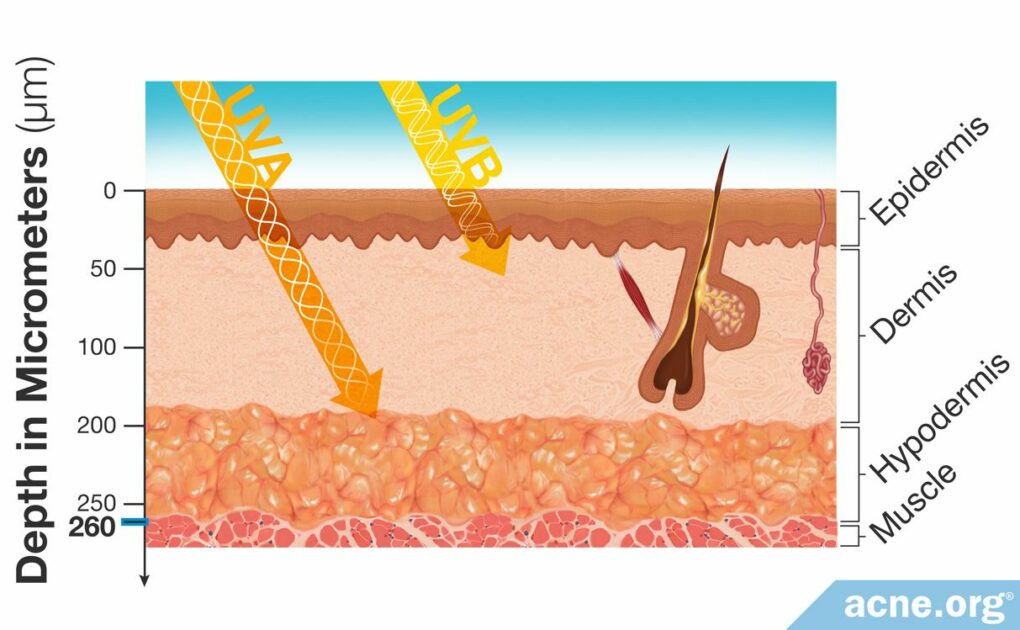 Put Simply, UVA Rays Tan the Skin While UVB Rays Burn the Skin. Both Types of Rays Damage the Skin and Contribute to Skin Cancer, Which Is Why It’s Important to Protect the Skin Using a “Broad-Spectrum” Sunscreen.

The sun emits both UVA and UVB rays, both of which are invisible to the naked eye, and which affect the skin differently.

Unprotected exposure to the sun is the main way that our bodies make vitamin D, a vital nutrient that might help reduce acne, so the sun’s rays serve a necessary purpose. However, overexposure can be harmful. Both UVA and UVB rays can cause skin damage and skin cancer, so it is important to limit exposure through a combination of hats and clothing, as well as using a broad-spectrum sunscreen.

How Much Sun Is Enough: For people with the lightest skin, getting about 20 minutes of unprotected sun each day should plenty to give you the vitamin D you need and still be safe for acne. For people with the darkest skin, 2 hours is a good rule of thumb. Stay aware of how much exposure you get, and most importantly, be sure to not get burnt. A sunburn often bites back with acne as the skin heals in the weeks following the burn.

Sunscreen: Since both UVA and UVB rays are harmful, be sure to apply sunscreen, particularly on sunny days and during the summer months. When selecting a sunscreen, choose an SPF of at least 15, but since this number refers only to UVB rays, in order to ensure you are also protected from UVA rays, choose a product that specifically says “broad-spectrum” or “UVA/UVB protection” on the label.

What Are UVA and UVB Rays?

Some of the sun’s rays can be seen and some cannot be seen. When it comes to skin health and acne, it is the unseen, ultraviolet (UV) rays that are of concern.

Ultraviolet rays are further broken down into:

Differences Between UVA and UVB Rays

The sun’s rays come to us in the form of waves. You can think of these waves in the same way as ocean waves, except that these are energy waves. Waves have crests (high points) and troughs (low points). The distance between crests is called the wavelength. Wavelength is what gives each type of ray its unique characteristics. For example, human eyes can see wavelengths only of visible light.

The main difference between UVA and UVB rays is that they consist of different wavelengths:

Amount of radiation that reaches the earth

Generally speaking, UV exposure is greatest when the sun is highest in the sky. Therefore, it is strongest during the summer months between 10:00am and 2:00pm.

Exposure is also greater at higher altitudes, so, for instance, it is stronger in Denver (the “mile high city”) than it is in Philadelphia, which is at sea level.

UV exposure is strongest on sunny days, but UV rays can pass through light cloud cover.4

How Do UVA and UVB Rays Affect the Skin?

According to the dermatology department on the University of California’s website: “UVA radiation…is less powerful than UVB, but it penetrates deeper into the skin. Small daily doses of UVA cause long-term skin injury, even without signs of sunburn. UVA light is used in tanning booths. Tanning booths not only cause the same type of skin and eye damage as natural sunlight, [but] may also be as much as 20 times stronger.”6

According to the dermatology department on the University of California’s website: “UVB radiation…has the most energy and causes the most damage. UVB can do more damage more quickly than UVA rays. Because of its damaging [e]ffect to the DNA of skin cells, UVB radiation is the main cause of sunburn and skin cancer.”6

Historically, scientists considered UVB to be the primary culprit in causing skin cancer, and they didn’t think that UVA was harmful. However, more recent research indicates that both kinds of UV rays cause skin damage and skin cancer.2,6

UVA and UVB Rays and Sunscreen: Why It’s Important to Use Broad-spectrum Protection

Since both UVA and UVB rays damage the skin and can cause cancer, and since each type of ray causes a different kind of damage, we need protection against both types of rays.7

Applying sunscreen is one of the most effective approaches to protecting against UV radiation. It is important to select a sunscreen that protects against both UVA and UVB. Because scientists have only recently understood that UVA rays are a concern, sunscreens traditionally contained ingredients that only protected against UVB radiation, but this is no longer the case.

While there is no similar standardized measure for UVA protection, many modern sunscreens contain ingredients that protect against UVA radiation as well. These sunscreens are usually labeled as “broad-spectrum” or “UVA/UVB protection,” meaning that they protect against both UVA and UVB.4 However, because there is no consensus on how much protection these terms indicate, such phrases may not be entirely meaningful.7

UVA and UVB Rays and Acne

Many acne patients report that moderate exposure to sunlight appears to improve their symptoms, at least in the short term. In light of this, scientists published an article in 2004 reviewing several different studies that looked at whether UV rays could improve acne. The researchers concluded that UV rays, particularly a combination of UVA and UVB rays, might cause a slight improvement in acne, but this small benefit is insignificant when weighed against the risks of excessive UV exposure.8

Taken together, the research indicates that UV exposure is not an effective treatment for acne. While getting some sun which does not cause a sunburn may be fine for acne-prone individuals, sun-burning the skin to attempt to heal acne is not wise.