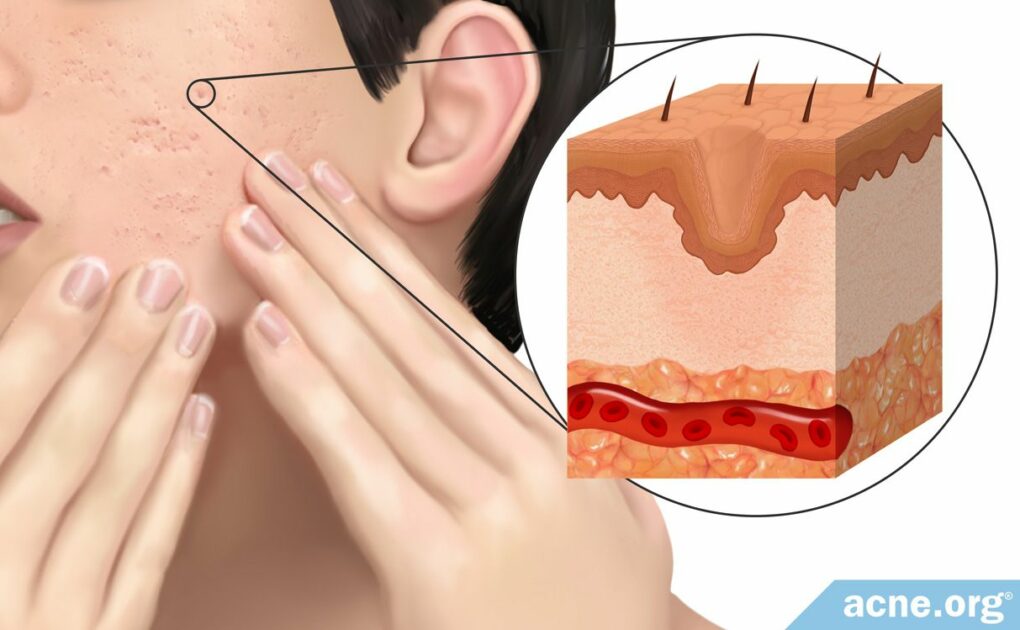 It’s the Result of Genetics and Inflammation

Why Do Some People Scar More Easily? Research suggests that the skin of people who scar tends to respond to an acne lesion with an inflammatory response that is too weak and too extended. Genetics also plays a part, meaning if your mom and/or dad have acne scars, you are more likely to develop them too.

Patients suffering from acne, particularly more severe acne, very often develop some amount of scarring. In fact, researchers investigating the prevalence of scarring in 185 acne patients treated at an acne clinic found that 95% had scarring somewhere on their face or body.1

Not everyone is equally prone to acne scarring. Individual differences in the immune system and genetics help explain why certain individuals are more susceptible to scarring.

Steps from Pimple to Scar

The surface of the body is covered with microscopic hair follicles that produce tiny hairs along with skin oil. These follicles, often called pores, can become clogged.2

2. Formation of an acne lesion

Once a pore becomes clogged, skin oil, which normally drains to the surface, is trapped inside and accumulates. Acne bacteria thrives on this skin oil and multiplies inside the skin. The pore expands, and the wall of the pore breaks within the skin. The immune system responds with inflammation, which consists of redness, swelling, and an infiltration of white blood cells. This forms a run-of-the-mill “pimple” or “zit.”2,3 If the clogged pore ruptures into deeper layers of the skin, it can develop into a larger (over 5 mm in diameter), severe inflamed acne lesion like a nodule or cyst. Any type of inflamed acne lesion can scar, but nodules and cysts are more prone to scarring.

The body uses inflammation to repair skin tissue. This cleaning process often results in damage of nearby healthy cells and tissues. After the inflammation subsides, the body begins repairing the cellular and tissue damage, which it does by stimulating the production of an important skin protein, collagen.4

Skin is essentially composed of cells (mainly fibroblasts, endothelial cells, and keratinocytes) and ECM. The latter is a dynamic, organized interlocking mesh of many different secreted macromolecules and proteolytic enzymes. The ECM has many functions, including: providing structure, organization, and orientation to cells and tissues; controlling morphogenesis and cellular metabolism by acting as a template for cell migration, proliferation, apoptosis, differentiation, and adhesion; regulate cell activity and function via directly binding to integrins and other cell surface receptors; act as a reservoir for growth factors and regulate their bioavailability.5

Why Some People Scar More than Others

People who are prone to acne scarring show a weaker and delayed/extended inflammation that is not as effective at repairing tissue. Chronic inflammation can be damaging to the skin tissue and cause acne scarring.6

From the three studies we have so far, it appears that genetics may play a part in whether someone is more prone to scars.

The first study observed that a specific gene is found more often in patients prone to acne scarring and believe that it is connected with skin cell growth and clogged pores.7

The second study identified a gene that was also present more often in patients prone to acne scarring, but the gene’s function remains unknown.8

Finally, a third study found a location on a genetic structure called a chromosome containing many genes that they believe are involved in acne scar formation.9

These findings promote the idea that genetics is one explanation for why some people are more prone to acne scarring than others. Scientists need to perform more research to confirm these findings, as well as to identify other potentially associated genes.

Might It Be Possible to Prevent Scars from Forming?

In theory, it should be possible for acne lesions and other wounds to heal without forming scars. We know this because wounds in the mouth heal without scars or with only minimal scars. In addition, if a fetus in the early stages of pregnancy becomes injured, the wound can usually heal without a scar.10

However, in teens and adults, as we have seen, acne lesions often do leave scars. Researchers are continuously studying the scarring process to understand how it might be prevented. For now, the best line of defense we have against acne scars is to use proven acne treatments, reducing the chances of breakouts that might end up leaving scars.

An final important thing to note here is that picking at the skin can cause more scarring than a pimple itself. Therefore, it is absolutely imperative that you don’t pick at a healing acne lesion. If you want to pop a pimple, do that carefully and correctly, but never, ever pick at your skin.