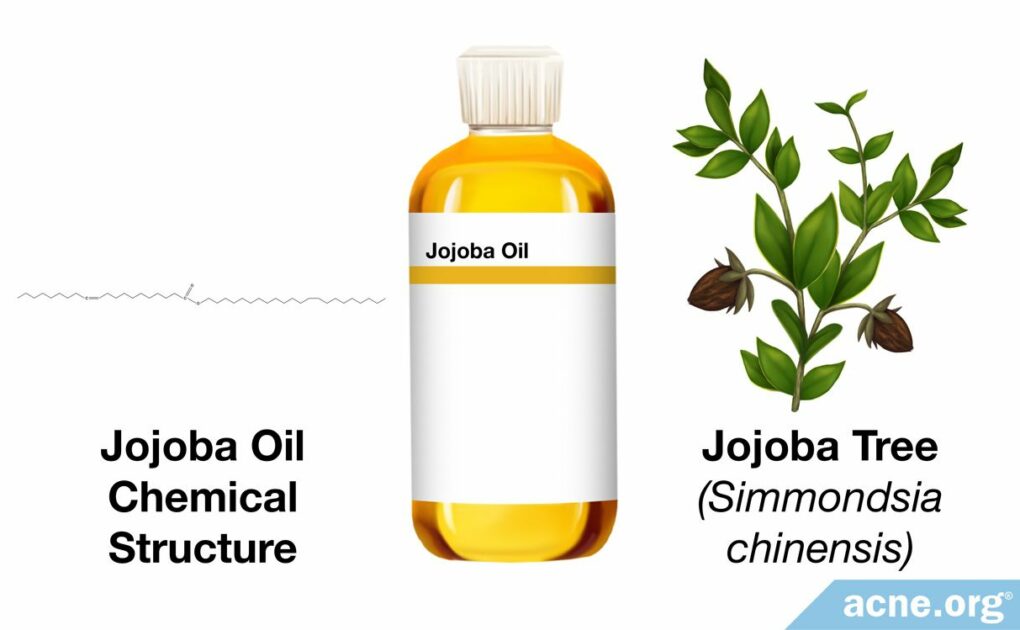 Everything You Need to Know About Jojoba Oil

Other Safe Oils: Sunflower oil and safflower oil are two other popular oils that are safe to use on acne-prone skin. They are not as stable as jojoba oil, and are not as good for some things as jojoba oil (massage for instance), but you can also use them without fear as long as you buy them fresh and never use them after they go rancid.

What is Jojoba Oil?

Jojoba (pronounced ho-HO–bah) oil is a botanical extract of the seed of the jojoba tree (Simmondsia chinensis). Technically it is not actually an oil, but rather what is called a wax ester. Why do we care? Because out of all of the compounds in nature, this wax ester is the most similar to human skin oil (sebum). It is theorized that applying jojoba to the skin can “trick” the skin into thinking it is producing enough oil, thus balancing oil production. The bottom line for acne-prone people is that jojoba oil is non-comedogenic so you can use it without fear.

The waxy cuticle of a leaf keeps moisture inside the leaf. Its array of epicuticular wax esters is chemically similar to jojoba wax esters.

The outermost layer of the skin, called the stratum corneum, keeps moisture inside the skin. Its array of epidermal wax esters is chemically similar to leaf wax esthers.

Can Jojoba Oil Help with Acne?

So far, one study has tested jojoba oil as a treatment for mild acne. That study found that 6 weeks of applying a jojoba-oil-containing clay facial mask 2-3 times a week reduced acne lesions by about half.1 However, much of the anti-acne effect may have been due to the clay in the mask rather than jojoba itself, so it’s a bit tough to say what led to the reduction in acne.

Even though this is only one preliminary study, there is still reason to be cautiously optimistic about jojoba oil for acne. Research suggests that it may have anti-inflammatory properties. Since acne is fundamentally an inflammatory disease, anything that fights inflammation could be helpful in reducing acne. In addition, jojoba may help restore the skin barrier (the outer layer of skin), which is important to keep strong when you are acne-prone.2,3

When I was looking for an organic jojoba oil producer, I wanted only the best. I looked at a few companies from the USA and one from Israel. I settled on the world’s first jojoba supplier to offer certified organic jojoba oil. This means they have the most experience and the most mature organic trees. After speaking with their quality control department, I also felt comfortable with their manufacturing procedures. For instance, they harvest only clean, dry, tree-ripened seeds, employ strict moisture and temperature control procedures, and finish up with cool single press extraction. I’ve learned that these steps result in the purest possible, unrefined oil. They are one of the world’s largest jojoba oil producers. Each year they harvest a large crop of jojoba nuts from the more than 750,000 mature jojoba trees growing at their 2000 acre farm. Currently they have over 600 acres of certified organic jojoba trees, where 100% of our oil comes from. They control the entire process, from growing the trees and harvesting the seed to processing the jojoba oil. This is good because it keeps outside variables to a minimum and assures us of a dependable supply that we can trust.

Also, I always inquire about our manufacturer’s environmental policies. Our partner farm says they are mindful to reduce waste, recycle, and conserve. Furthermore, jojoba growth helps sustain farming in rural communities and helps save precious desert water. Their farm, located in the desert, encourages jojoba’s natural growth with a minimum of external input. They also adhere to strict EPA, Organic and OSHA standards that protect us, the farmers, and the product.”

Where to Buy Jojoba Oil

Health food stores – You can find jojoba oil at almost any health food store. I always see it myself at Whole Foods®. Basically, it’s widely available. Just make sure to check the label if you want organic.