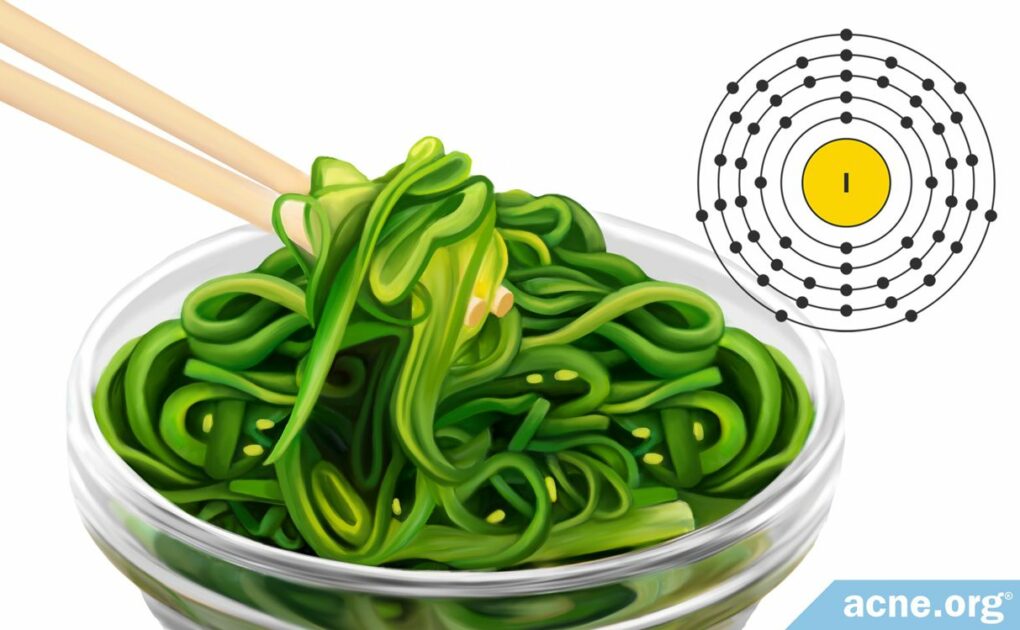 Despite What You May Have Heard, There Appears to Be No Inherent Link Between the Two

There is no evidence that normal intake of iodine in the diet causes acne. Any relationship between the two appears to occur only with very high levels of iodine intake, such as from kelp supplements.

Furthermore, acne-like reactions on the skin after ingesting high levels of iodine are not in fact what people know as acne, but instead a skin reaction which looks like acne that goes away as soon as the person reduces their iodine over-consumption.

The Bottom Line: You don’t need to worry about getting too much iodine unless you consume very high amounts of kelp or other seaweed, typically taken in kelp supplements, or unless you take medications that contain high levels of iodine.

The question of whether iodine intake is linked with acne has been the subject of scientific debate for decades because some studies show a relationship between high doses of iodine and acne-like eruptions called acneiform eruptions. Acneiform eruptions look like acne but are not the typical acne vulgaris lesions that many people experience during their adolescence and beyond.

What Is Iodine, and Why Do We Need It?

How Do We Obtain Iodine?

The human body cannot make iodine itself: the only way to get it is through the diet. The primary source of iodine in the modern diet is iodized salt, which is salt with iodine added. Since achieving adequate amounts of iodine in the body is important, some countries require that iodine be added to salt. The United States does not require this, but iodized salt is very common in the homes of people in the United States, and approximately 90% of U.S. households own iodized salt.

Aside from iodized salt, the most common iodine-containing foods are:

It is unlikely that eating these foods will cause an acneiform eruption.

Nonetheless, if you eat a lot of seaweed and are concerned about the iodine content, you can boil the seaweed for 5 minutes to eliminate 70% of the iodine.2

Apart from food, iodine is also present in some medications, dietary supplements, and contrast fluids used in radiology studies, sometimes in much higher amounts than is recommended. In people who are susceptible to high levels of iodine, these sources of iodine can cause problems with the thyroid gland and, in extreme cases, might hypothetically cause an acneiform eruption, which is called iododerma.1,3

The Studies: What Does the Research Say about the Relationship Between Iodine and Acne?

For the past 60 years or so since research began on iodine and acne, studies tend to produce the same results. They show us that only very high doses of iodine cause an acne-like reaction in the skin.

Before 1977, scientists had conducted four investigations on iodine and acne. While each group of researchers used slightly different methods, they all generally agreed that typical amounts of ingested iodine do not worsen acne.4-6 However, in two of the research investigations, people ingesting very large amounts of iodine did experience a worsening of acne.5,6

Research conducted since 2005 has failed to produce compelling evidence that iodine in the diet causes acne. However, scientists continue to acknowledge that consumption of very high levels of iodine, such as consuming a diet rich in seaweed or taking medications containing a lot of iodine, may cause acne-like lesions.7-10

Taken together, we can conclude that there is no direct scientific evidence that iodine causes or aggravates acne. However, some reports do suggest that high doses of iodine do, in some circumstances, cause lesions that resemble acne. In these cases, the acne-like lesions disappear as soon as the patient stops ingesting the iodine.

Scientists still do not know why iodine sometimes causes these acne-like reactions, but various hypotheses have been put forward, including an immune reaction by skin cells to excess iodine, and skin inflammation.11

There are enough things to concern yourself about when it comes to acne, but iodine is not one of them. Don’t worry about how much iodine a certain food might contain. Instead, simply avoid taking large amounts of kelp supplements and you should be fine.