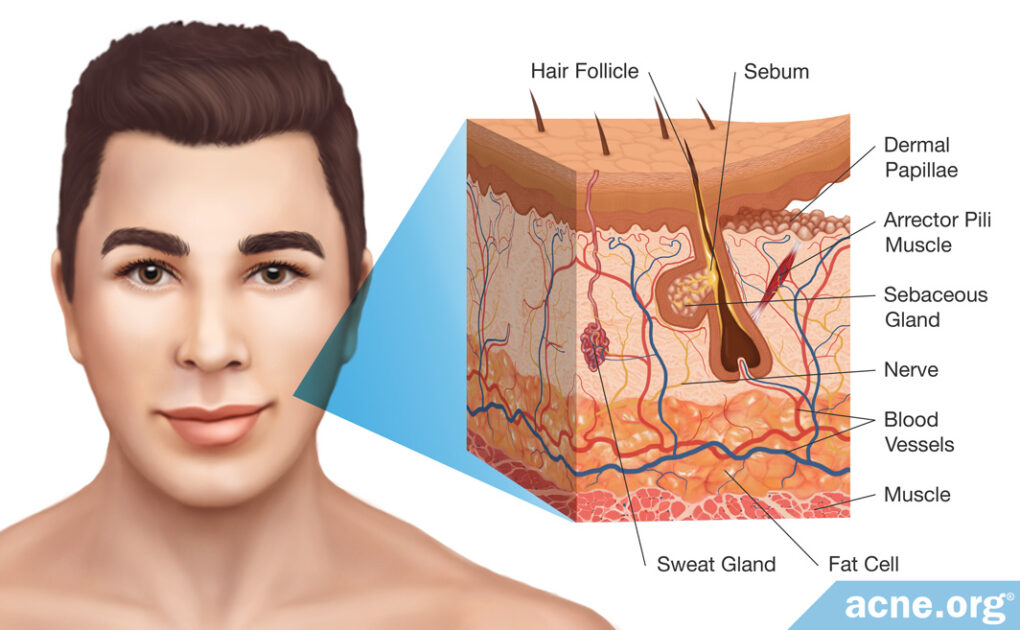 The skin is the body’s largest organ, and consists of three main layers:

These layers are composed of skin cells called corneocytes, keratinocytes, melanocytes, fibroblasts, and mast cells, as well as blood vessels, glands, and nerves, all of which give the skin a variety of functions. These functions include:

The skin is the largest organ in the body, comprising up to 16% of the body’s weight.

The skin provides a variety of functions, including:

Structure of the Skin

The epidermis is the topmost layer of the skin. It is composed mainly of skin cells called keratinocytes, which produce the protein, keratin. This is the same protein that is found in hair and in nails.

In acne, keratinocytes reproduce faster than normal. Also, they do not shed as they should, and instead stick around and clog pores.

The epidermis is broken down into the following five layers:

The production rate of new skin cells in the basal layer is normally equal to the shedding frequency of old ones in the stratum corneum, so the number of cells in the epidermis remains steady. However, in the case of acne, the dead skin cells do not shed properly and instead clog the opening of the hair follicle pore, giving rise to a chain of events that eventually result in acne.1,3-5

The dermis sits directly beneath the epidermis, providing support for it. The dermis contains skin cells, blood vessels, nerves, glands, and hair follicles and is much thicker in size than the epidermis.

There are two layers of the dermis.

The hypodermis is a thick fat layer that sits directly beneath the dermis and separates it from other body structures like muscles and bone. The fat in this layer provides insulation for the body, stores energy, and protects the body through its cushioning effect.1