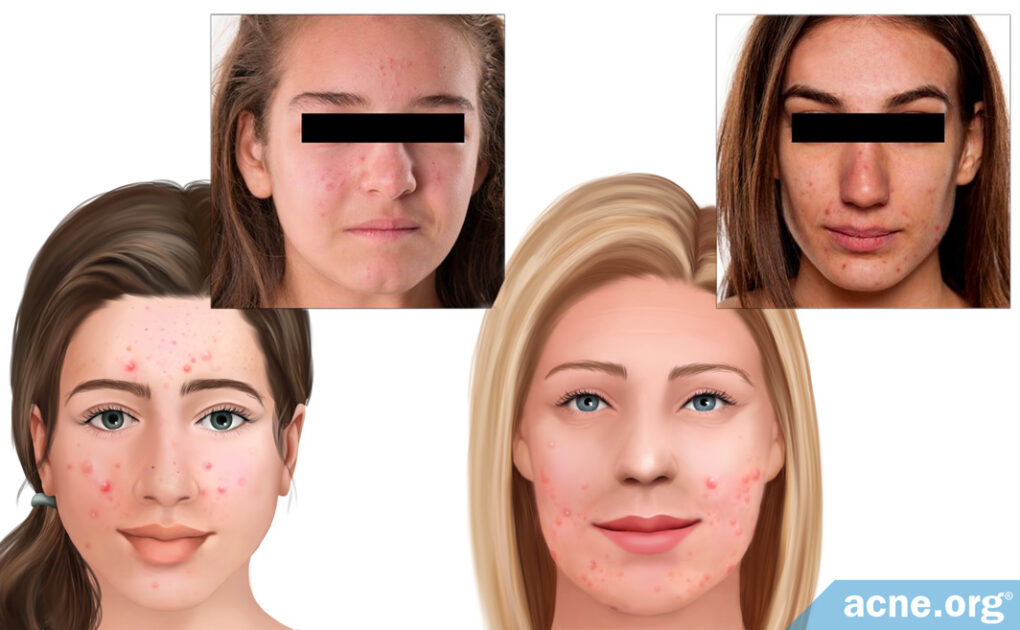 Location of Breakouts: Teen acne often includes breakouts on the entire face, whereas in adult acne, breakouts are more common on the lower half of the face (cheeks, chin, and jawline).

What They Have in Common: Teen and adult acne are both hormonal conditions, are passed down in a family through genetics, and may be affected by diet.

Acne in teens and adults is the same disease: acne vulgaris. However, depending on the age of the person with acne, it is classified as either:

Although teen and adult acne are the same disease, teen acne is much more common than adult acne.

A comprehensive study of over 17,000 Chinese acne sufferers published in 2012 in the journal Acta Dermato-Venereologica found that only 25% of all acne cases were adult acne, most of which were persistent.3

Smoking and alcohol consumption show a much weaker potential connection.3,8,9

Let’s take a closer look at each potential cause, starting with hormonal imbalance.

In both teens and adults, an increase in the level of androgens (male hormones present in both males and females) in the body must occur for acne to form. This increase in androgens may be caused by:

Here’s how androgens lead to acne: Increased androgen levels stimulate the growth of skin oil glands under the skin, resulting in increased production of skin oil (sebum), which can lead to a cascade involving acne bacteria (C. acnes), inflammation, and ultimately acne.10

The following British Journal of Dermatology article sums it up:

Both teens and adults are much more likely to develop more severe acne, and teens are likely to develop acne earlier, if they have at least one first-degree family relative (a parent, sibling, or child) with acne. According to an overview article published in 2012 in the British Journal of Dermatology, “Acne occurs earlier and is more severe in those with a positive family history.”11

Similarly, a study that looked at 454 people with adult acne found that a family history of acne was a key risk factor for suffering from acne after age 25.

The study was published in the Journal of Clinical and Aesthetic Dermatology in 2018. The researchers found that among 454 patients with adult acne, 70.9% had a family history of acne. They wrote, “Our results agree with the literature data on adult acne….[that] family history represents one of the main risk factors.”12

Several research groups have investigated the role of genetic (hereditary) factors in both teen and adult acne by studying pairs of twins at different ages. Identical twins are exactly the same genetically, whereas non-identical twins are genetically similar as a pair of siblings who are not twins.

In both teens and adults, diet is the third most frequently implicated factor by scientists in acne development and severity.9 However, research is still trickling in, and no firm conclusions can yet be made.

For both teens and adults, eating a diet that contains a large amount high glycemic load food may contribute to acne development. Examples of such foods include white bread, white rice, pasta, soda, or candy.

Eating high-glycemic load food increases the production of a hormone called insulin in the body. Because insulin is a “master hormone,” which controls other hormones, an increase in insulin can lead to an increase in male hormones (androgens) in the blood. As discussed above, an increase in androgens leads to increased skin oil (sebum) production and acne.16

The studies performed thus far on dairy and acne are based on questionnaires, which are prone to error, but most do show a correlation between milk and acne. No correlation has yet to be shown between cheese or yogurt and acne.16,17

In addition to the above potential causes of teen and adult acne, smoking and alcohol may also factor in.