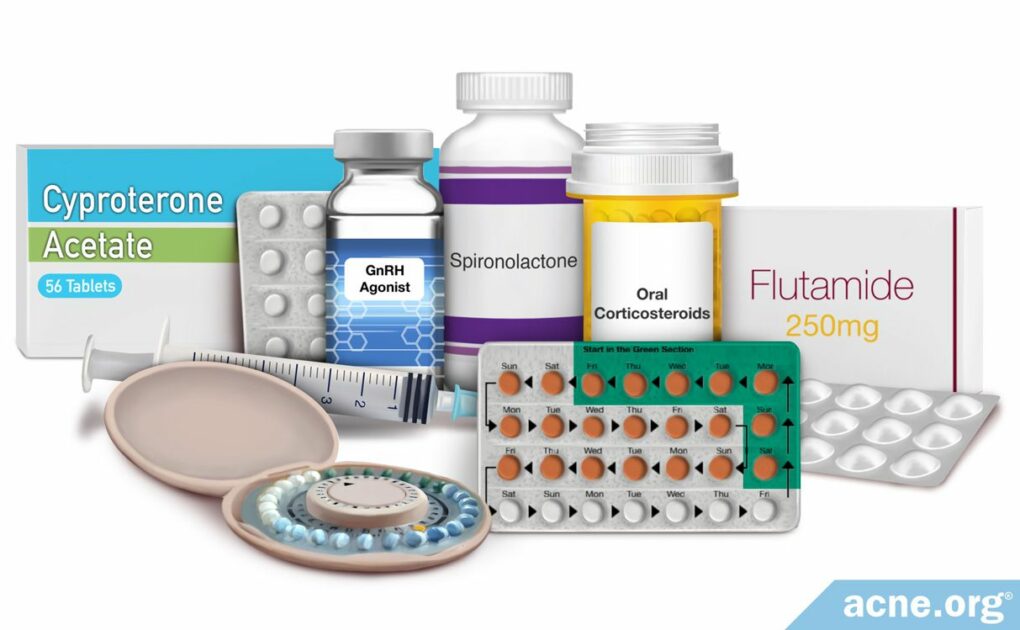 It Can Help Females, but There Are Limitations Regarding Women Who Are Pregnant or Breastfeeding

There’s not much that boys and men can do about these hormones, because hormonal treatments can cause feminization of the male body, including breast growth, as well as other undesirable side effects.

However, doctors sometimes prescribe hormonal treatment to girls and women, as long as they are not pregnant or breastfeeding.

Acne is a hormonal disease, and this is why we see it rear its head during puberty, when hormonal production goes into overdrive.

Each of these hormones plays a different role in acne:

Because acne is a hormonal disease, treatments that address hormone levels in the body can help alleviate symptoms. Available hormonal treatments include:

Let’s have a look at the effectiveness and side effects of each, starting with by far the most commonly prescribed hormonal treatment for acne, combined oral contraceptives (COCs).

In addition to preventing pregnancy, the estrogen in COCs reduces sebum and may reduce the level of androgens, both of which reduce acne symptoms. The role of progestin in COCs is not understood as is that of estrogen and appears to vary somewhat according to the type of progestin.5

There are several types of progestin that can be present in COCs, including:

There are many COCs on the market. In the United States, the Food and Drug Administration (FDA) has approved three COCs for acne treatment:

However, just because these brands are approved for acne does not mean they are superior to other COCs. It’s notable that other countries have also approved other COCs for acne.5 In other words, research shows us that all COCs help reduce acne.

Effectiveness: Regardless of which ones are approved in any particular country, all COCs show evidence of effectively treating acne in women.

A 2012 systematic review (a rigorous literature review that pools the results of many studies) concluded that all COCs resulted in a significant reduction of acne lesions and acne severity. The review concluded also that COCs containing CPA appeared to be more effective than the other progestins studied, but the evidence for this was limited.5

Side effects: The most serious side effects of COCs are thromboembolisms, which is a type of blood clot that can cause severe problems and even death. Therefore, COC-use is not advised in women with predisposing factors that raise their risk of a thromboembolism, such as genetic clotting disorders, previous thromboembolisms, heart disease, high blood pressure, obesity, smoking in women older than 35 years of age, diabetes, liver disease, migraine and headache, prolonged immobilization, such as long-term bed rest, history of breast, endometrial, or liver cancer, pregnancy and breast feeding, or hypersensitivity to any ingredient in a COC.5

Other safety concerns are related to the estrogen in COCs and include breast tenderness, heart disease, headache, nausea, blood clotting problems, and risk of uterus and breast cancers. Newer COCs that contain a lower dose of estrogen carry a lower risk of these side effects.5

Finally, combining a COC with an antibiotic may reduce the effectiveness of the COC if it is used for birth control. There is some evidence that doxycycline and tetracycline, which commonly are used for acne, do not affect the effectiveness of COCs. However, if you are trying to prevent pregnancy, it is wise to employ a second method of birth control when taking any antibiotic with a COC.5

Cyproterone acetate (CPA) is a progestin that often is present in a COC, and is sometimes, albeit rarely, prescribed on its own. Cyproterone acetate works as an anti-androgen: it blocks androgen receptors and decreases the production of androgens. Because of these effects, cyproterone acetate may cause feminization and other issues in males. It also cannot be used in pregnant women.5,7

Effectiveness: I’ll just talk about studies based on CPA when it is prescribed on its own because when prescribed as part of a COC, it produces results on par with other COCs. Based on two studies performed in the 1990s, CPA used alone in the recommended dose of 50 – 100mg per day can result in 75% – 90% improvement in acne within three months.5

Side effects: The most common side effects of CPA are irregularity in the menstrual cycle, breakthrough bleeding (bleeding between periods), breast tenderness, headache, and nausea. However, these side effects typically are temporary or go away with time. Using CPA in a COC rather than alone significantly reduces the menstrual side effects.5

A less common but more concerning side effect of CPA is liver damage. This is dose dependent, meaning that higher doses carry more risk.5

Effectiveness: A 2009 systematic review concluded that because of the limited number of studies and the inadequate number of patients in each study, the effectiveness of spironolactone remains unproven. A more recent 2017 review came to the same conclusion.8 However, the review authors also noted that until more rigorous evidence becomes available, we must rely on doctors’ experience, which suggests that spironolactone does work to improve acne.

In fact, doctors have been using spironolactone for more than 30 years to treat hormone-related skin diseases, such as acne. Some studies show spironolactone to be effective in treating acne on the face, chest, and back in both adolescent and adult females. Some of these studies indicate that at standard doses of 50 – 100mg once or twice per day, improvement can be seen within three months.5,9 For example, three studies published in 2017 found that 71% – 86% of female patients improve on spironolactone.10-12

Side effects: Spironolactone can cause menstrual irregularities and tenderness or enlargement of the breasts. However, these side effects typically are mild and more common at higher doses. In addition, spironolactone can cause a high potassium level in the bloodstream, though this is not much of a concern in young, healthy acne patients. Nevertheless, people taking spironolactone should avoid taking ACE-inhibitors (a type of high blood pressure medication) or potassium supplements.5,7

Flutamide is an anti-androgen that is used to treat prostate cancer. It works by blocking androgen receptors.5,7

Effectiveness: A 2011 clinical trial indicated that flutamide was as effective as COCs containing CPA in treating acne lesions.9 However, the authors suggested that their results should be confirmed in further future studies with larger numbers of patients.13 Other studies indicate that at the standard dose of 62.5 – 500mg per day, it can result in an 80% improvement in acne.5

Side effects: The most concerning side effect of flutamide is liver toxicity, which appears to be related to dose and older age. Because of this, researchers advise starting with a low dose and increasing the dose only if necessary.

According to a 2015 article in the British Journal of Dermatology, “Monitoring of liver function is mandatory [when taking flutamide] as cases of fatal [liver toxicity] have been reported.”5

Other side effects include diarrhea, hematological disorders (disorders of the blood), muscle cramps, and breast enlargement.9 Like other anti-androgens, it cannot be taken during pregnancy.5

Gonadotropin-releasing hormone agonists (GnRH agonists), such as buserelin, nafarelin, and leuprolide, suppress hormones that stimulate androgen production. These medicines are reserved for women who do not respond to or who cannot tolerate COCs.5

Side effects: While GnRH agonists suppress androgens, they also suppress the production of estrogens. The lack of estrogen may lead to menopausal symptoms, such as bleeding, osteoporosis, and flushing. GnRH agonists cannot be used during pregnancy, breastfeeding, or if there is vaginal bleeding unrelated to periods.7,14