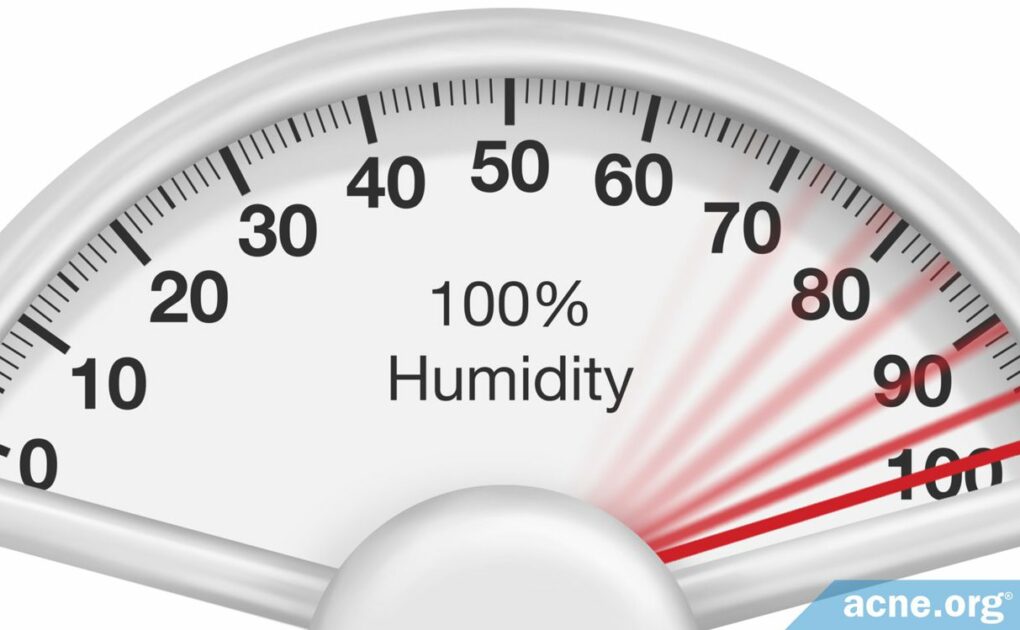 No One Knows, but Scientists Speculate That Humidity Might Play a Role in Acne Development or the Appearance of Acne

Researchers have not yet identified whether humidity increases acne symptoms, but some researchers hypothesize that humidity might worsen acne by:

More research is needed to evaluate each of these possible issues in order to draw any conclusions on whether or how humidity affects acne.

My Experience and Thoughts: I’m only one person, so it’s purely anecdotal, but I grew up in Pennsylvania, where it’s very humid during the summer, and my acne was usually worse in the summer months. My own personal hypothesis on humidity is that it “plumps” the skin. Follow along with me here…when humidity and heat plumps up your skin, it expands. Now imagine going inside your skin, into a pore. When the skin around the pore plumps up, the pore walls are forced together. And anything that forces pore walls to touch might lead to them sticking together. Clogged pores are the first step in acne development, so perhaps it’s this expansion of the skin that leads to more acne. However, even if I’m right, there’s not much that anyone can do about humidity, so there’s no point in obsessing about it. After I found The Regimen, I was able to keep my skin clear even in the summer months.

Scientists have not performed any research that directly investigates the effect of humidity on acne severity. Therefore, to determine whether it may play a role, we must rely on studies that investigate the effect of:

However, even when we look at these studies, due to a variety of conflicting conclusions, we can’t definitively say whether humidity affects acne. This is the case sometimes in science. We must simply say “we don’t know” until we get more data. Still, let’s have a closer look at the studies we do have and see what we can discover.

Seasons & Acne (summer is the most humid season)

Scientists have performed several studies that investigated the relationship between seasons and acne severity. Since summer is normally the most humid season, this could potentially give us a clue into how humidity might factor into acne.

However, many of these studies simply involved asking young people to answer surveys. This is called participant self-reporting and is known to be an unreliable scientific method.

Some studies have found a link between humid seasons and increased acne, others have found the opposite or observed no seasonal pattern at all. Therefore, if there is a link between humid times of the year and acne, it is likely to be fairly weak. In other words, based on the evidence we have thus far, the jury is still out on whether acne is worse in particular seasons.1-5

Scientists have performed only two studies, both in 2013, investigating the effect of altitudes on acne.

Researchers have performed several studies to identify if acne prevalence changes depending on where people live. They have also performed studies to see if acne symptoms change during temporary travel to a new area.

Overall, researchers have not yet identified if living in certain climates may cause people to be more or less prone to acne. However, some evidence suggests that short-term travel does not affect acne severity.

Although scientists have not yet determined whether humidity levels affect acne severity, they have proposed four mechanisms that could hypothetically connect humidity with worsening of acne.

Skin health depends on microbes (micro-organisms) and bacteria that support the skin barrier and immune system. These microbes and bacteria also help prevent diseases like acne. When humidity increases, the excess moisture can promote microbial growth and cause an unhealthy imbalance of microbes in the skin, which may exacerbate acne. One 2009 study found that a skin disease called Demodex could worsen in humid environments, so it is hypothesized that the same is true of acne.19,20

When the body temperature rises, the skin secretes more skin oil onto the surface of the skin.

While this has not been shown to cause acne, a 2012 study discovered that skin oiliness increases in hot and humid environments. However, the observed increase in skin oiliness was not due to a larger amount of skin oil, but instead a thinning of the oil’s consistency. This lends credibility to an argument that heat and humidity would result in less acne since acne occurs when sebum becomes trapped inside the pore. However, this is hypothetical, and there is no evidence that the resulting increased skin oil excretion from hot and humid weather helps reduce acne.21

The skin acts as an important barrier protecting the body from harm.

Research has shown that sweat remains on the skin longer in a humid environment than a less humid one. This lingering sweat can cause sweat ducts to clog and produce a small red bump on the skin. Although clogging of sweat ducts is not acne, it appears similar to acne.