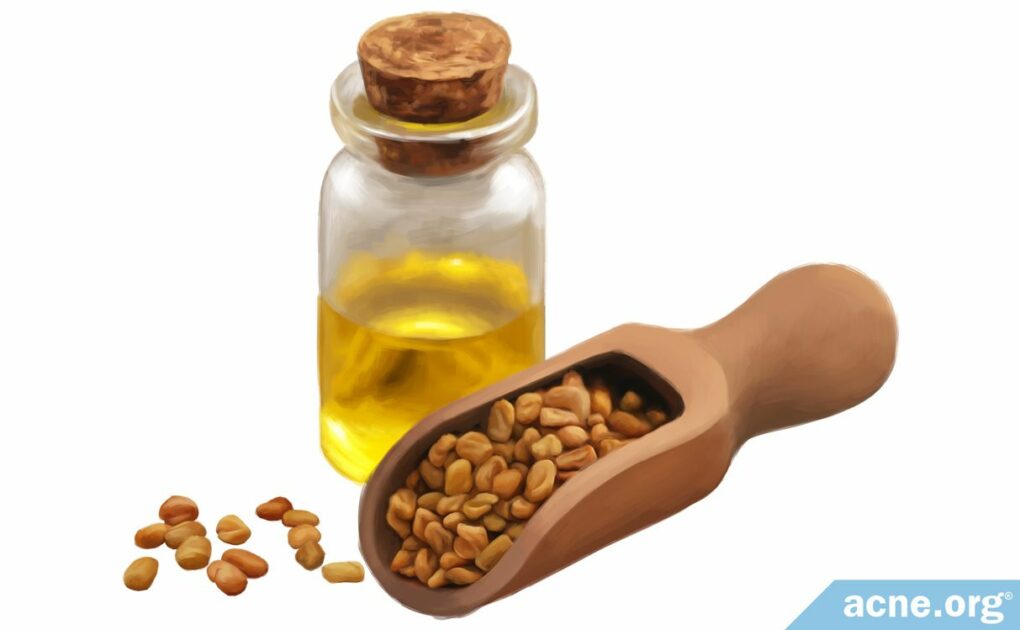 It’s Too Early to Say. Fenugreek Shows Some Promising Medicinal Properties in the Lab but Has Never Been Tested on People with Acne.

Fenugreek is a Mediterranean kitchen herb whose seeds possess some medicinal properties.

On the other hand, some weak, preliminary evidence suggests that fenugreek might also make acne worse by:

We need studies on real acne patients to tell us whether the benefits and drawbacks of fenugreek add up to make it a worthwhile home remedy.

We also need more research into possible side effects. So far, one study has reported on two cases of severe allergy to fenugreek seeds, but it is difficult to say how likely this reaction is.

Fenugreek, or Trigonella foenum-graecum, is a plant of Mediterranean origin that is now grown worldwide. In Asia, fenugreek leaves and seeds are popular ingredients for curry powders, pickles, and spices, while cooks in the U.S. use fenugreek as a spice for soups and stews.1,2

Fenugreek contains substances that may reduce inflammation. Since acne is an inflammatory disease, fenugreek might potentially help control acne. However, notice the emphasis on the word “might.” We won’t know until studies are performed on people with acne.

Some indirect evidence suggests that fenugreek may:

On the other hand, a small amount of preliminary evidence suggests that fenugreek might potentially make acne worse by:

In theory, it looks like the beneficial effects of fenugreek for acne might outweigh the harmful ones. However, we really cannot say how acne-prone skin would respond to fenugreek until studies test this treatment on real patients.

Side Effects of Fenugreek

Since very few studies have tested fenugreek seeds as a treatment for any medical condition, we know little of its potential side effects.

One study, published in Acta Poloniae Pharmaceutica – Drug Research in 2010, tested fenugreek seed extract on the skin of eleven volunteers and found that none of the volunteers developed skin irritation. The authors wrote, “[T]he formulation can be used safely without any significant skin irritation.”3

On the other hand, one case report published in the Annals of Allergy, Asthma & Immunology in 1997 described two cases of allergic reaction to fenugreek:

This suggests that people prone to allergies and those with asthma should exercise caution when handling or consuming fenugreek. However, more studies are necessary to clarify the side effects of fenugreek and how widespread these side effects might be.

How to Use Fenugreek Topically

For topical use, you will need a liquid or oil extract of fenugreek. This may not be available at your local drugstore but can be ordered online.

Keep in mind that herbal remedies like fenugreek are unregulated by the U.S. Food and Drug Administration (FDA), which means these products may contain variable amounts of medicinal ingredients. In addition, some extracts may contain undesirable chemicals, such as pore-clogging (comedogenic) oils that may potentially worsen acne. Therefore, exercise caution when trying any new fenugreek product and keep an eye out for symptoms of skin irritation or acne flare-ups.

We have very little guidance for using fenugreek topically.

Taking the average of these three studies, a good place to start might be applying fenugreek extract to the skin once a day and monitoring your acne symptoms. Since any potential medicinal benefits are likely to be mild and gradual, you may need to use the extract for many weeks to notice any effect. Always be on the lookout for symptoms of allergy or skin irritation and stop using fenugreek if these occur.

If you want to know more about the indirect evidence suggesting that fenugreek might potentially benefit acne-prone skin, read on as we take a closer look.

Evidence for the Potential Impact of Fenugreek on Acne-prone Skin

Seven studies have investigated the medicinal properties of fenugreek that might potentially impact acne-prone skin. The table below gives an overview of these studies, and below, we will dissect each one and examine how strong the evidence really is.

As you can see in the table, six studies have found indirect evidence that fenugreek might potentially help with acne by improving various factors that contribute to acne, such as inflammation. Let’s go through these factors one by one and examine the studies that show how fenugreek might be beneficial.

Caution – Deep Science Ahead: Read on if you’re interested in all the gory details. Otherwise, let me offer my personal opinion at this point. Usually natural or home remedies don’t do much to reduce acne. Chasing after the latest fad normally results in disappointment. Your efforts are most likely better spent researching proven treatments.

One study found that fenugreek may reduce inflammation. In that experiment, researchers gave rats suffering from inflamed joints (arthritis) a fenugreek seed extract by mouth. They found that the extract reduced inflammation in the rats, resulting in improvement of the rats’ symptoms.5

Since this experiment tested an oral fenugreek treatment, we cannot be sure that topical fenugreek would necessarily have the same anti-inflammatory effect. In addition, it is important to keep in mind that this treatment helped rats but has yet to be tested on humans.

All people have acne bacteria living on/in their skin, but in some people, these bacteria trigger an inflammatory response that makes acne worse.9

Study 1: In the first study, researchers tested the ability of fenugreek seed extract to kill various bacteria in the laboratory. They found that fenugreek could kill a type of bacteria called Staphylococcus, which is a Gram-positive type of bacteria similar to C. acnes. The researchers wrote, “[F]enugreek has some antimicrobial effect on all the species of Staphylococcus.”10 Therefore, this suggests that fenugreek may also be somewhat effective against acne bacteria.

Two studies found that fenugreek may speed up the healing of small wounds like acne lesions.

Study 2: In the second study, researchers compared the wound-healing properties of fenugreek seed oil to cicaflora, a recognized herbal treatment for wound healing. They tested each treatment on wounds on the backs of rats. They found fenugreek to be as effective as cicaflora and more effective than simply cleaning the wounds regularly with saline (lightly salted water).11

Since both of these studies tested fenugreek on wounds in animals, more research is necessary to see whether fenugreek also works for human wounds like acne lesions.

As we have seen, there is also some indirect evidence that fenugreek might worsen acne. Let’s take a deeper look.

One study found that fenugreek might possibly increase the production of skin oil, which would tend to worsen acne. In this study, eleven volunteers applied a fenugreek seed emulsion to their cheeks every day for six weeks. The researchers monitored the amount of skin oil on the volunteers’ cheeks throughout this period. They found a gradual increase in skin oil production over the six weeks. However, the increase was too small to be statistically significant. This means that the increase in skin oil might be accidental and might have nothing to do with the fenugreek treatment. The researchers would need to repeat the experiment with a larger number of volunteers to determine whether fenugreek really tends to increase skin oil.3

Because of the weakness of this evidence, we really do not know yet how fenugreek impacts skin oil production.

If you are interested to know about the chemicals fenugreek contains, feel free to expand the following section.