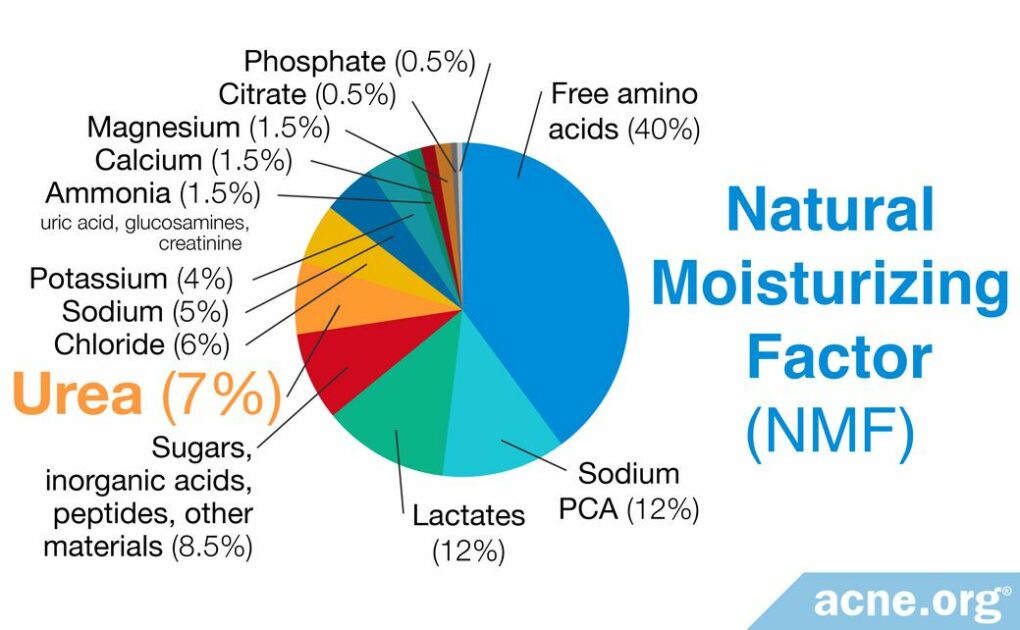 Urea Is Included in Many Topical Skincare Products. It Moisturizes and Can Strengthen the Outermost Layer of Skin.

What Is Urea?: Urea is often included as an ingredient in various skincare products, particularly moisturizers. This is because urea can help hydrate the skin. In fact, urea exists naturally in the outermost layer of our skin, where it helps maintain hydration.

Urea and Acne: The natural urea in our skin helps keep the top layer of the skin, called the skin barrier, strong. A healthy and strong skin barrier helps keep moisture from escaping through the skin, which keeps the skin in balance. This is particularly important for people with acne because, while still unproven, acne-prone skin may come with an impaired skin barrier more often than not. However, depending on the formula, skincare products containing synthetic urea may either strengthen or weaken the skin barrier, so it is important that the product is tested to see how it impacts the skin barrier. In other words, just because a product contains urea doesn’t mean it will be good for acne.

Urea for Other Skin Conditions: Urea can also be included at a high dose (up to 40%) in creams, lotions, shampoos, and gels, to treat skin disorders like atopic dermatitis or psoriasis. Since different conditions respond well only to specific concentrations of urea, talk to your doctor about which formulation is best for you. If you plan on using a product that contains large amounts of urea, be aware that in higher concentrations it can result in unfavorable reactions, such as stinging of the skin. However, if you simply see it as an ingredient in your moisturizer, it should be fine.

Urea is a naturally occurring waste product in urine and is also present elsewhere in the body, including in the skin, where it makes up about 7% of what dermatologists call the Natural Moisturizing Factor (NMF).1-2

What Does Urea Do in the Skin?

Urea is an important component of natural moisturizing factor (NMF). The primary purpose of the NMF is to maintain adequate hydration in the skin, particularly in the outermost layer of skin, the stratum corneum.

As a 2012 article in Practical Dermatology explains:

The role of the NMF is to maintain adequate skin hydration. Adequate hydration of the stratum corneum serves three major functions: (1) it maintains plasticity of the skin, protecting it from damage; (2) it allows […] enzymes to function in the process of [skin shedding]; and (3) it contributes to optimum [skin] barrier function.”3

As a component of the NMF, urea acts as a moisturizer and helps to improve the quality of the skin’s protective barrier, called the barrier function of the skin.4 This protects the body from external substances.

According to a 2011 article in the Journal of Clinical Medicine:

“Healthy skin provides protection of the body from environmental factors: physical (mechanical trauma, thermal injury, radiation), chemical (destructive agents, surface active substances, xenobiotics, allergens) and biological (bacteria, viruses, etc.). A major element of the defensive function of the skin is to maintain homeostasis by preventing the uncontrolled loss of water, ions and serum proteins from the organism into the environment.”5

Inadequate hydration of the stratum corneum results in dry skin. In fact, several skin conditions, including psoriasis and atopic dermatitis, both of which feature extremely dry skin among their primary symptoms, appear to be linked to reduced levels of NMF.3

In addition to acting as a moisturizer and helping to improve the skin’s barrier function, urea also exhibits several other important functions in the skin:

While urea is a naturally occurring substance, it can also be created synthetically in laboratories (by placing ammonia and carbon dioxide into a reactor under high temperature and high pressure). Synthetic urea is used for multiple purposes, including medical uses.1,2,6

The most common medical application for urea is dermatology. Dermatologists have prescribed urea, mostly in cream and ointment preparations, since the 1940s. More recently, it has been added as an ingredient in many cosmetic products.5,7

Researchers have conducted numerous studies on urea as a dermatological therapy, specifically investigating:

At least one study has identified urea as an effective moisturizer.

Furthermore, just because the dryness of the skin appears to improve, this does not always mean the skin’s barrier is strengthened. Research shows that while some moisturizers containing urea seem to improve barrier function, others have no effect or may even weaken the skin barrier.12,13

Because urea performs multiple functions on the skin, doctors can prescribe and recommend it for a variety of skin concerns.

Research indicates that the most commonly used concentrations of urea when treating dry skin are 10% and less. The most common concentration when treating ichthyosis (dry, scaly, thickened skin) and atopic dermatitis (a red, scaly, itchy rash) is about 10%. Products that are used to treat psoriasis vary in urea from 10% to 40%, and products that are used to treat a fungal infection called onychomycosis contain urea typically at about 40%.8

Urea is not regarded as an acne treatment, but it can be a welcome ingredient in moisturizers designed for acne-prone skin. Researchers agree that a weakened skin barrier may contribute to acne, and urea can help repair the skin barrier.14 However, it is important that the manufacturer tests the product to ensure that it does strengthen the skin’s protective barrier.

While urea typically causes few side effects, creams and lotions containing urea sometimes can bring about adverse skin reactions, such as stinging and smarting (a sharp, superficial sensation) after applying the urea-containing product.15