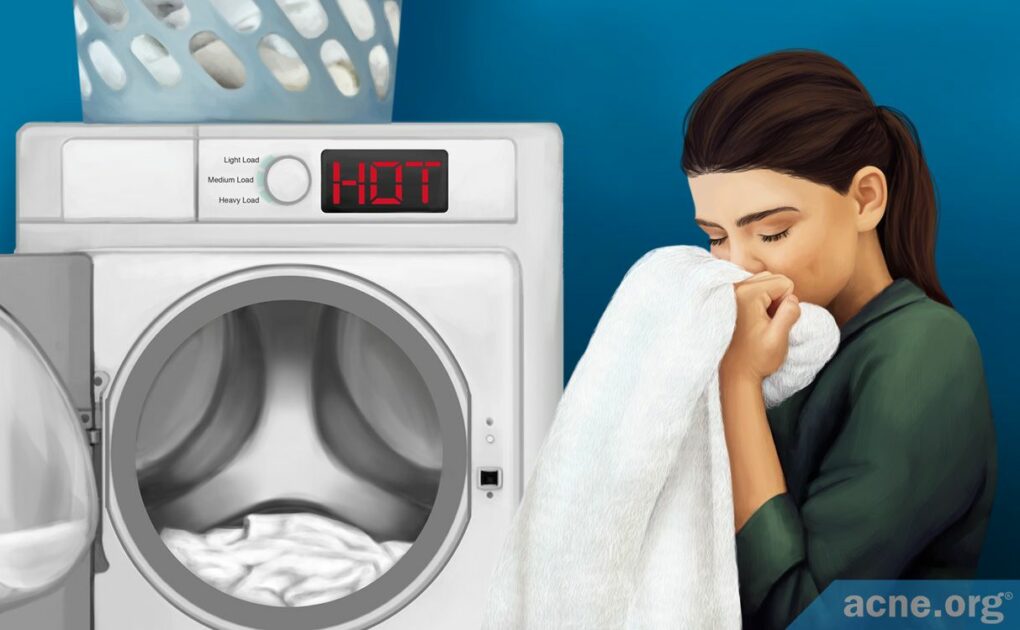 It’s OK to Reuse Your Towel: After you use your towel and hang it back up, the wet and warm environment can be a breeding ground for microbes (germs like bacteria, viruses, and mold). Since acne is at least in part a bacterial disease, you may wonder whether using the same towel multiple times can contribute to acne. However, the available evidence suggests that when it comes to acne, it is generally safe to reuse your towels. This is because it’s the bacteria inside your skin that we have to be concerned about when it comes to acne–not bacteria on the skin surface.

Also, the small amounts of oil or makeup that can build up on your towel is unlikely to lead to acne.

The Bottom Line: Washing your towel once a week in hot water should be adequate.

Stay Gentle When You Dry! Physical irritation of the skin is the real concern when it comes to towels. Physically irritating the skin can lead to more acne, so when you are drying your skin, gently pat dry and do not rub. Let the towel do the work.

A good rule of thumb is to wash your towel once a week in hot water. But don’t stress about it too much. Used towels are unlikely to contribute to acne. Let’s have a look at exactly why this is the case.

Towels are often damp, and are stored in relatively warm bathroom environments, making for an ideal breeding ground for microbes, including bacteria. This causes some people to be concerned when it comes to acne, because acne bacteria play a role in making acne worse.

What is the role of bacteria in acne?

A type of bacteria called C. acnes is involved with the inflammation (redness, swelling, heat, and pain) that we see in most red and sore acne lesions. C. acnes can only survive where there is no oxygen, such as inside skin pores. Therefore, it cannot survive on a towel. This means we don’t need to be concerned about C. acnes on towels or on the surface of the skin.

From these events, we can see that it is bacteria inside pores that contributes to the inflammation inherent in acne. Therefore, we need not concern ourselves with the bacteria that might be living on towels, at least when it comes to acne.

Can Oil or Makeup on Towels Make Acne Worse?

In addition to bacteria, towels can pick up other substances, such as:

However, there is no evidence suggesting that the small amount of oil and/or makeup that a towel may pick up could cause acne.

Oil left on towels from skin/hair

There is no evidence to suggest that oil from skin or hair that accumulates on towels causes or worsens acne.

While some clinical trials on both animals and human skin have shown that certain vegetable oils, like coconut oil, can be pore-clogging, studies have only shown that human skin oil can aggravate acne when it is over-produced inside the skin. Furthermore, even if skin oil on the surface of the skin did contribute to acne formation, the amount that you would likely get on your skin from drying with a towel is minuscule, and unlikely to cause a problem.

If you work with so-called “cutting” oils, such as the grease used in automobile repair or the grease that factories use to lubricate machines, your towels may pick up these oils, and if these specific types of oils end up on acne-prone areas of your body, they may cause a specific type of acne referred to as oil acne.

Oil acne occurs due to prolonged exposure to cutting oils, which can clog pores and trigger acne.2 Cutting oils are vastly different from olive oil or other cooking oils used in the kitchen, and are also totally different from the oil that our body produces. Most people never encounter cutting oils, so unless you work in an automobile repair shop or work closely with grease in a factory setting, you are likely safe from oil acne. On the other hand, if you do get cutting oils on your towel, you will want to wash that towel immediately.3

Acne caused by makeup is common and even has its own name: acne cosmetica.3 However, the amount of makeup that might end up on your towel is likely extremely small, so the likelihood that this will cause a problem is slight.

The Real Danger of Towels: Rubbing the Skin with Towels Can Physically Irritate the Skin and Make Acne Worse

Acne-prone skin tends to have an impaired skin barrier. This means the skin’s outmost layer is damaged and loses water more easily than healthy skin.

Anything that physically irritates the skin can further damage this skin barrier and lead to more acne.

Towels can irritate the skin when you aren’t careful. Therefore, it is important to gently pat your skin dry, and avoid any rubbing.

Researchers have conducted a study to test how different ways of drying the skin with a towel might damage the skin.

The study, published in 2002 in the journal Contact Dermatitis, used Korean volunteers. After soaking their forearms (up to the elbow) in warm water for five minutes, the volunteers scrubbed their forearms with a rough towel. The researchers then tested the skin to see how waterproof it was. They found that the skin’s water-holding capacity decreased after the scrubbing and did not return to normal for several days. In other words, scrubbing with a rough towel reduces the skin’s ability to stay hydrated for several days.4 This could directly lead to increased acne, which is why the dermatological community agrees that acne-prone people should treat their skin gently and prevent damage to the skin’s barrier. So when using a towel, use it very gently.

As a side note, roughly washing the skin, especially with harsh soaps, can also damage the skin’s barrier.5 So be sure to also stay very gentle when washing your skin. Use only a gentle cleanser made specifically for the face, and avoid soap altogether.

As we have seen, microbes from reused or shared towels are unlikely to cause acne or make acne worse. On the other hand, towels can spread other infections. Therefore, it is a bad idea to share towels with family members who have an active infection like a cold, the flu, or a skin infection.

It is important to keep in mind that most studies looking at microbes on towels have been conducted in a hospital setting. Since hospitals contain a large number of patients with different severe infections, there are many different kinds of microbes in a hospital–many more than in most people’s homes. In addition, because hospital patients are often treated with antibiotics, bacteria that have managed to survive in the hospital are more likely to be antibiotic-resistant. These antibiotic-resistant bacteria are dangerous because they cause infections that are difficult to treat. On the other hand, at home, it is rarer to find antibiotic-resistant bacteria or other microbes that can cause severe infections. Therefore, we must use caution and common sense when applying the results of these studies to a domestic setting.

The findings of these three studies suggest that, in a hospital, towels can spread bacteria and molds between people and are a potential source of infections. Therefore, sharing towels or reusing towels that have not been thoroughly washed is risky in a hospital setting. However, since people who live in the same household typically have the same microbes on their skin, sharing towels among family members at home is generally safe, if the towels are kept dry and washed regularly.

Tip: Letting towels dry properly between uses by hanging them wide in a well-ventilated place can help prevent the growth of bacteria and molds.

Some Towel Materials Pick up More Microbes than Others

Although microbes picked up by towels most likely do not contribute to acne, they may still spread other infections through your household. Therefore, you may wish to buy towels made of materials that are less likely to pick up microbes.

Household towels, particularly bath and hand towels, are usually made of either cotton or a cotton-polyester blend. Based on limited and very weak evidence from studies in hospitals, to reduce the spread of bacteria, the best choice for household towels may be terry cotton, but it is most certainly too early to say this conclusively.