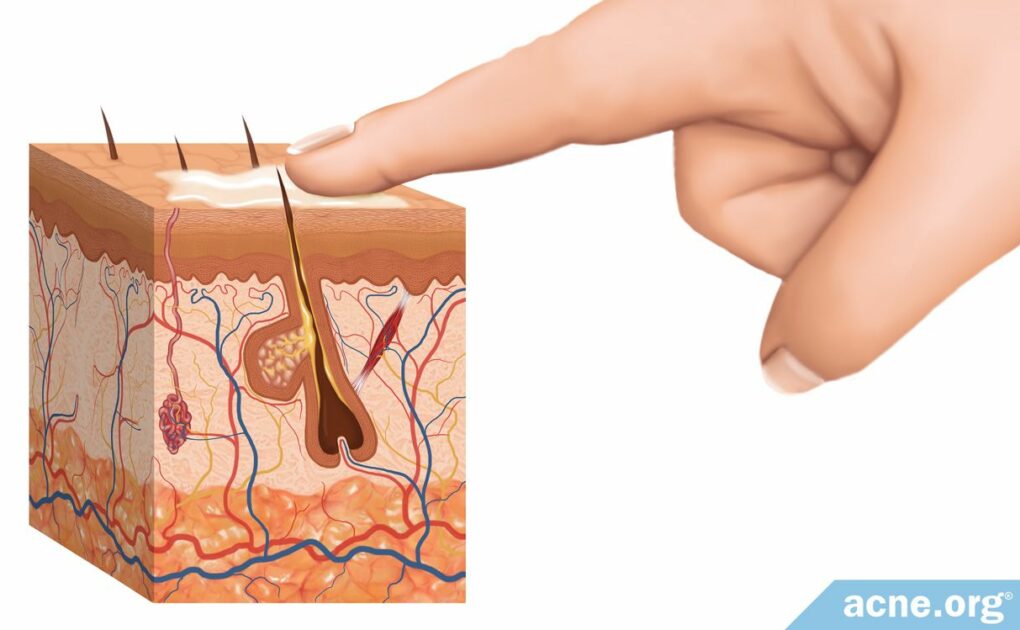 Topical Treatments Can Penetrate into the Skin in Several Ways

Topical treatments for acne must first pass through the outermost layer of the skin so they can reach the area of the skin where their action is needed.

The 3 ways topical treatments absorb are:

Caution – Deep Science Ahead: Continue reading below if you’re a biology nerd.

Topical drugs, including acne treatments, are effective only when absorbed into the skin. However, a drug has to pass through the outermost layer of the skin to get where it is needed.

To understand how the skin absorbs topical drugs, let’s begin with a quick review of the structure of the skin.

The skin functions as a physical barrier, protecting the body from the external environment and is made of three layers.

In order to be effective, most topical drugs need to pass through the outer layer of the skin, the epidermis, into the deeper layers of the skin.

Although the bricks-and-mortar structure of the stratum corneum limits the passage of substances through the skin, some topical medications indeed are able to penetrate it and move into the deeper layers of the skin. These drugs move through the skin by three primary processes.

Intercellular diffusion is the most common method by which drugs absorb into the skin.7 Substances pass through the spaces around each skin cell instead of passing directly through the cells themselves.

Although less efficient, it is easier for substances to absorb into the skin in this way because they do not have to cross the cell membranes.

Trans-appendage diffusion is a process by which a substance bypasses the stratum corneum by moving through the hair follicle or sweat duct.

Because hair follicles and sweat ducts account for about only 0.1% – 1% of total human skin surface, not much can be absorbed via this method. Additionally, some research suggests that even where hair follicles and sweat glands exist in high numbers, absorption rates still are low. For example, drug absorption through the hands and soles of the feet, both of which contain a high density of sweat glands, is low.3,4,7

On the other hand, scientists are beginning to wonder whether trans-appendage diffusion might be more common for acne medications than previously believed. That’s because acne starts inside skin pores, a.k.a. hair follicles. Therefore, it makes sense that topical drugs that effectively fight acne might be penetrating the skin directly through hair follicles. In addition, some scientists argue for producing more acne treatments that penetrate the skin in this way.8,9 However, this is still a relatively new area of research, so time will tell whether trans-appendage diffusion might one day become more common for acne treatments than intercellular diffusion.

Although there are three ways topical drugs may absorb into the skin, most medications absorb via intercellular diffusion, which means the drug penetrates the outermost layer of skin by moving through the spaces between individual skin cells.