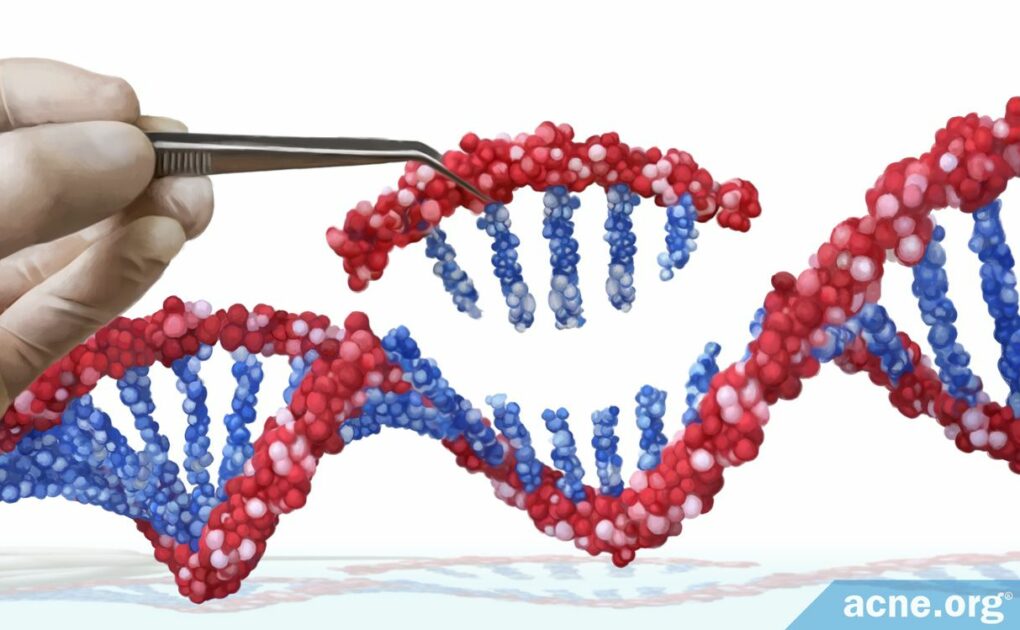 Genetic Treatments for Acne May Be a Real Possibility in the Future, but None Exist Today, and None Are Currently in Development

However, the only treatments that have been successful so far treat diseases that are caused by a single defective gene. Since acne is a complex disease caused by many factors, including most likely multiple genes, developing a genetic treatment for acne presents a serious challenge.

Even if a genetic treatment for acne were to enter into trials, the process is a long one, so in a best case scenario, we would be over a decade away. In reality, we are likely much further away than that.

If all of that weren’t already discouraging enough, even if a genetic treatment for acne were successful at fixing or replacing defective genes involved in acne, this would probably not completely clear acne, since other factors aside from genes most likely contribute to acne, such as hormones.

However, the pace of progress in genetic research gives us reason to hope that such a treatment may be available in the distant future.

Gene therapy is a relatively new type of treatment that adds or replaces genes to treat or prevent diseases. The idea is to either fix defective genes that cause a disease or to replace them with healthy genes.1 Gene therapy is currently available for a handful of diseases and is undergoing testing for many others. In most cases, these are serious diseases that have no other cure.2,3

At this point, no gene therapy is available for acne, nor are any clinical trials underway to test future gene therapy treatments for acne. For such treatments to become a reality, scientists will need to overcome several hurdles:

Even if scientists overcome all these hurdles, acne is still a so-called multifactorial disease.4 This means that many other factors besides genes combine to cause acne. In other words, gene therapy may help with acne but probably not cure it.

Still, there is reason to be optimistic. Cancer is another multifactorial disease involving many genes and many research groups are already testing experimental genetic treatments for cancer. One day, genetic treatment for acne may be a real possibility as well.

To understand how gene therapy works, we first need to remind ourselves what genes are.

What is a gene and where does it live?

A gene is a piece of DNA containing instructions for making a protein. Proteins are the building blocks of our bodies. In other words, genes are the recipes our cells use to build and repair our bodies.

Genes come in different lengths, but all human genes live in one place in the cell: the nucleus (an organelle in the center of the cell). The nucleus of each cell contains DNA coiled into rope-like structures called chromosomes. Each chromosome is the home of hundreds or even thousands of genes.2

The Human Genome Project, an international research program that began in 1990, concluded that each human cell contains between 22,000 and 25,000 genes.2

Scientists name each gene using a combination of letters and sometimes numbers according to its function. For example, the KRT1 gene provides the recipe for our skin cells to make a protein called keratin-1.7

How genes can go wrong

Depending on the gene, some abnormalities may be harmless, but some can disrupt the production of important proteins and lead to diseases.

The goal of genetic treatment

The aim of genetic treatment is to add missing genes or to fix abnormal genes that underlie a disease. Ideally, this should restore the body’s ability to make key proteins so that the body functions correctly and becomes healthy again.

How is it done?

Now let’s get into the deeper science of how we fix or replace genes when those genes are inside the cells of a fully-grown person. There are two ways to do it: gene therapy or gene editing.

The idea of gene therapy is to introduce new, functioning genes to compensate for the ones that are defective or missing in the body. In other words, instead of attempting to fix the existing “bad” genes in the person’s body, we just add “good” ones.

This sounds simple but is a technical challenge. The problem is that we cannot just inject the correct genes into the body. We need to somehow get them into the nucleus of the cells. To do that, scientists use something called a vector (a sort of carrier or delivery system). The simplest vector is a virus, because viruses are naturally good at getting into people’s cells and entering the nucleus. Of course, to use a virus as a vector, scientists have to tinker with it first so that it cannot cause illness–otherwise, the cure might be worse than the disease!1,2

Gene therapy is currently available for a handful of diseases and is being tested on patients for many others. Acne is not among these diseases. However, just recently, researchers reported on a successful gene therapy treatment of two people with a different, severe skin disease called epidermolysis bullosa.

The idea of gene editing is to repair the defective genes in the person’s body. In other words, instead of adding “good” genes, we try to fix the existing “bad” ones so they will function correctly.

Gene editing is very tricky because it requires a way of getting into the nucleus of cells, finding the malfunctioning genes among tens of thousands of other genes, and then making precise changes to just those genes–all of this in a living, breathing person. Currently, scientists use specialized molecules that work like scissors, cutting DNA at very specific places.

Compared to gene therapy, gene editing is still in its infancy. However, researchers from the U.S. have successfully used this method to correct the mutation of the hemoglobin gene that causes sickle cell anemia.1 Many clinical trials (large studies on patients) are testing gene editing for various diseases.

In other words, this is a rapidly developing and promising area of research. Still, gene editing is risky: accidentally editing the wrong genes could spell disaster, which is why extensive testing is necessary before gene editing becomes widely available.

What Diseases Are Candidates for Genetic Treatment?

In theory, any disease with a genetic component is a potential candidate for genetic treatment. Acne qualifies, because a family history of acne makes a person more likely to develop the disease.

However, developing, testing, and obtaining government approval for a new genetic treatment is a massive undertaking. As a first priority, scientists are focusing their research efforts on diseases that:

Acne does not fit these criteria because it is not life-threatening, can improve with existing treatments, and most likely results from many factors, including multiple genes. Therefore, right now no genetic treatments for acne are available or are even far enough in development to be tested on patients.

According to an article published in 2018 in The Journal of Gene Medicine, gene therapy treatments are currently only available for six dangerous diseases:3

Diseases for which genetic treatments are currently being tested

In addition, clinical trials (large studies testing gene therapy on patients) are underway for many other diseases. The vast majority of these clinical trials (over 60%) are taking place in the United States.3

The table below shows the disorders for which regulatory agencies have approved clinical trials.3 As you can see, acne is not on this list. This means that right now, no clinical trials are taking place to test genetic treatments for acne.

How Safe Is Gene Therapy?

Gene therapy is relatively new and mostly still in the research phase. According to an article published in 2017 in the Brazilian scientific journal Einstein (São Paulo), “Currently, gene therapy is an area that exists predominantly in research laboratories, and its application is still experimental.”1 This means that we do not yet know how safe most genetic treatments are.

Changing or replacing genes can lead to unpredictable health risks. Previous studies have reported some cases of serious side effects of gene therapy, such as toxicity, inflammation, and even cancer.2 This is why medical and research institutions work together with regulatory agencies to ensure that people participating in clinical trials are as safe as possible. The following organizations oversee clinical trials in the United States:

Some government officials and scientists question whether gene therapy is ethical (morally right).

When it comes to changing the genes in a person’s somatic cells (cells in non-reproductive organs, such as the skin, brain, or kidneys), most scientists agree that gene therapy is ethical. This is because changes in the somatic cells only affect that individual, but do not get passed on to his or her children. In other words, we are not changing the DNA of future generations of humans when we perform gene therapy on somatic cells.

On the other hand, changing the genes in a person’s germline cells (reproductive cells like a sperm or egg) is a subject of intense debate around the world. The issue is that changes in germline cells get passed on to the children of the person who receives the treatment. The idea of changing the DNA of future generations of humans makes many people nervous. In the U.S., as in many other countries, scientists cannot use government funds for germline gene therapy research. In addition, the FDA refuses to even look at proposals to test germline gene therapy on patients.1,15

While genetic treatment has become a reality for a small number of life-threatening diseases, no such treatment is yet on the horizon for acne. Intensive research into genetic treatments for many other diseases give us reason to hope that scientists will soon develop the tools to start exploring gene therapy for acne. If and when this day comes, a genetic treatment could put a dent in acne, but is unlikely to completely eliminate it, since acne is likely caused by more than just genes.