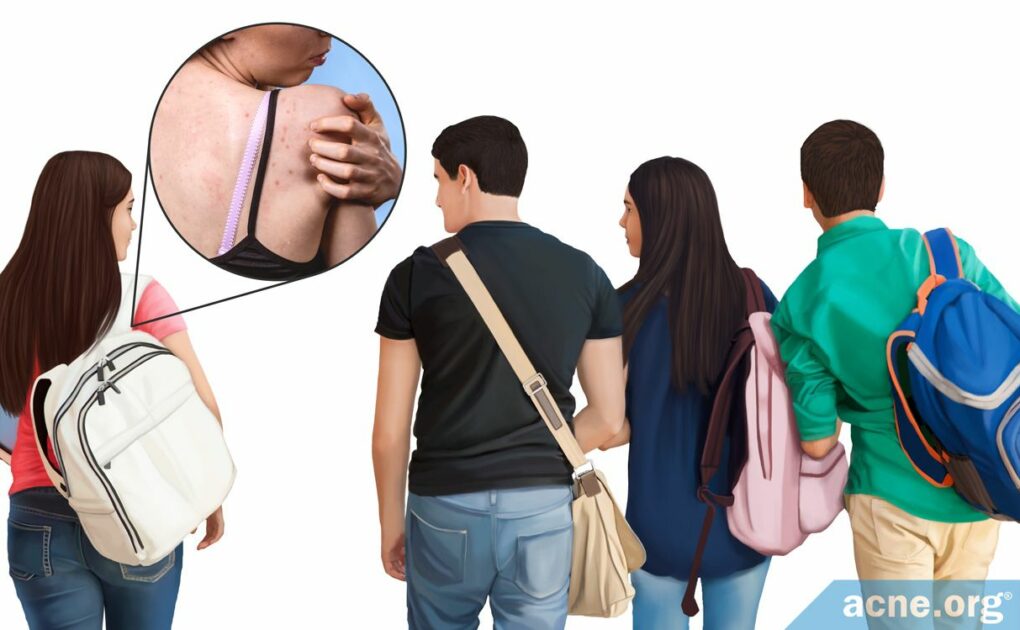 Yes, and It Can Occur in Anyone – Even Those with Healthy Skin

Acne mechanica, which is the scientific term for acne caused by physically irritating the skin, may occur anywhere on the skin, depending on what part of the body is exposed to physical irritation.

To limit acne on the body, try to eliminate obvious sources of repetitive physical irritation, but don’t stress about it too much. Proper topical treatment of the body can normally keep acne at bay.

Acne is a disease most known for its appearance on the face, but it can also occur anywhere on the body, except on the palms of the hands and soles of the feet. It is primarily an inflammatory disease, and anything that increases inflammation, such as irritating the skin, may increase acne symptoms.

Acne that is the result of physical irritation of the skin is called acne mechanica. It is now generally recognized and known that friction, tension, rubbing, and persistent pressure from belts, seats, tight clothing, and other physical irritants can cause and/or worsen acne, even in people who are not acne-prone.1-5

In this article, we will focus on acne mechanica on the body, but it can happen on the face as well.

While skin appears smooth to the naked eye, in reality it is comprised of a series of “hills” and “valleys.” Under a microscope, we can see that, inside of the skin’s pores, are tiny hairs. These hairs create “peaks” on the skin, with valleys between each peak.1

One hypothesis is that physical irritation may occur due to these microscopic peaks being rubbed or hit, causing mechanical damage to the upper portion of the hair follicles. This mechanical damage may induce an inflammatory response and, subsequently, acne.

A second hypothesis contends that rubbing against the skin may affect the entire surface, not just the upper portion of the hair follicles.

Sweating can make acne mechanica worse: Further irritation can result when the body’s skin becomes sweaty. The excess moisture softens the skin, making it more prone to damage. So, for example, wearing a purse or backpack on a hot day could cause even more irritation than on a cool day, due to the extra moisture on the skin.

Potential Sources of Irritation on the Body

There is no way to avoid things touching the body throughout the day. However, if you are breaking out in one particular area of your body, you may want to consider potential repetitive irritation to that area. Sources of acne mechanica on the body include the following, among many others.

Studies Show a Link Between Physical Irritation and Acne

The following studies show that physical irritation can lead to acne, and that sweating can make it worse.

It is no surprise that acne mechanica on the body is associated with playing sports. This is particularly so for people who play contact sports, such as football. The most common cause is the wearing of protective equipment, which rubs against and irritates the skin, especially on the shoulders, upper back, back of the neck, and chin – all areas where protective equipment is worn.

According to the journal called The Physician and Sportsmedicine, in football players, acne mechanica “is not seen during the first days of practice before protective equipment is worn and starts to improve immediately after the season is over…”5 This gives further evidence that acne mechanica is specific to the irritated areas of the skin, and that removing the triggering factor can eliminate the issue.

Body Acne in Other Athletes

Besides football players, acne mechanica may occur in other athletes such as runners, cyclists, cricket players, and weight lifters. Acne may also develop beneath the tight, synthetic clothing of gymnasts.

Since sweating can make acne mechanica worse, taking a shower immediately after playing sports and wearing moisture-wicking clothing can both help.6,7

Acne on the Back of the Neck

The back of the neck is a common area where acne mechanica can strike. Stiff collars which rub against the skin all day long produce the irritation necessary to induce acne in some people.

However, when it comes to the back of the neck, there is also a unique type of acne that can occur due to physical irritation called acne keloidalis nuchae (AKN).

According to one study published in 2007 in the International Journal of Dermatology, 90% of patients with AKN felt that having their hair cut at a barbershop is what triggered this condition. AKN caused by use of razor blades at a barbershop could arise due to one of two occurrences:

1. Repetitive use of a particular razor. When a razor is used repetitively, the edge of the razor will eventually become dull, and the barber will need to apply more pressure to perform a close shave. This results in damage, or irritation, to the skin, potentially setting the stage for acne.

2. Use of non-sterilized razors. A razor that has not been sterilized properly can spread infection.4

Any kind of repetitive physical irritation can lead to acne on the body, and sweat worsens the problem. However, we can’t lead lives without lots of things coming into contact with our bodies all day long. Therefore, don’t stress about it too much. Instead, simply eliminate obvious sources of irritation when you can, and properly treat the skin to prevent breakouts.