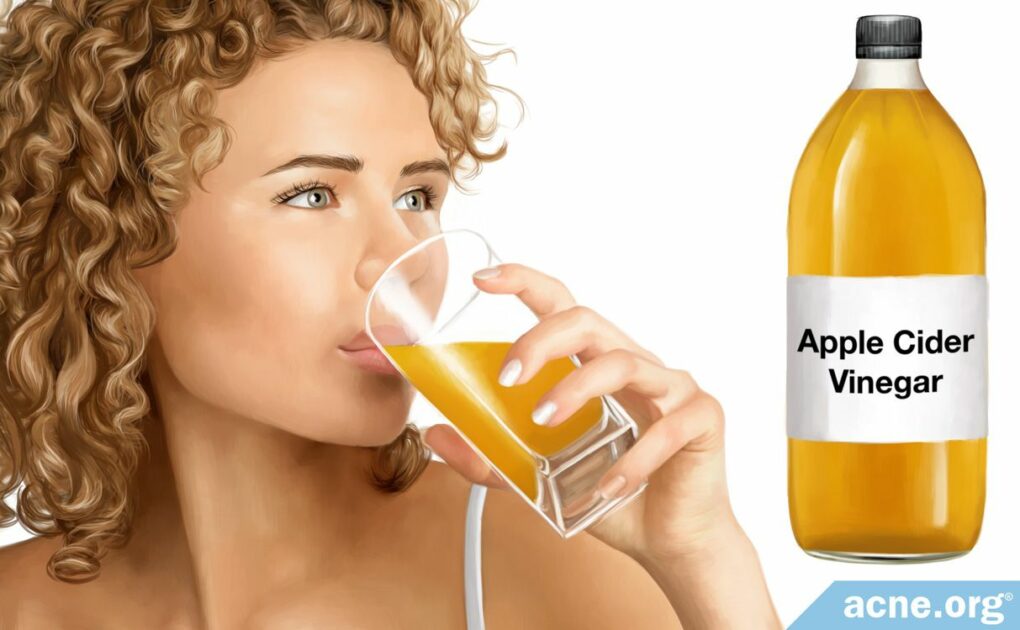 People have been using vinegar medicinally for thousands of years, and information which indicates that vinegar is therapeutic for a variety of bodily ailments is accumulating.

The available science suggests that ingesting a small amount of apple cider vinegar or any type of vinegar for that matter might potentially help to improve acne by:

The vast majority of home remedies for acne show very little promise, but drinking apple cider vinegar does have a bit of science behind it.

Is Caution Necessary? There is very little research on long-term, frequent consumption of vinegar, but it is possible that it could cause health problems. So, as with most things in life, don’t overdo it. Keep your dosage to 2 tablespoons of vinegar (mixed with a cup or so of water), and do it no more than once per day.

How I Do It: I keep some organic apple cider vinegar in my fridge. It’s pretty cheap and widely available. After I eat a high-glycemic meal or desert, I will sometimes mix a couple tablespoons of apple cider vinegar with water, take a deep breath, and down it. It’s got a strong and pungent taste, but it’s not terrible and it feels refreshing afterward. Even if it’s just placebo, it makes me feel a little better about not eating perfectly, plus I get a few bonus antioxidants.

There is some scientific evidence which suggests that ingesting vinegar might be somewhat helpful in managing acne due to its ability to reduce blood sugar levels and provide the body with antioxidants. It probably won’t work wonders, but it might help a tad.

First, let’s look at what vinegar is, and then we’ll consider how it might be useful in treating acne.

Vinegar is a natural food product that is made by a process called fermentation. Fermentation uses yeast and bacteria to convert sugar into alcohol and acids. Vinegar-fermentation is a two-step process:

Vinegar is mostly water and acetic acid, but it contains a variety of other compounds in small amounts that give vinegar its characteristic flavor, including:

It is the acetic acid and flavonoids that are most likely to contribute to the healing of acne.2,5,6

In recent years, evidence has been accumulating which suggests that diet may affect acne.7-10 When it comes to vinegar, it may:

Let’s have a closer look at how vinegar may help, starting with how it may counteract the effects of a high-sugar diet, also called a high glycemic diet.

Research suggests that a high-sugar diet may promote acne. When we say “high-sugar” we mean foods that contain a lot of sugar, but also high-carbohydrate processed foods. When we eat these types of food, our body produces insulin to process the sugar. The theory goes that a high-sugar diet causes the body to produce more insulin (an important hormone that regulates many other hormones in the body) and more androgens (male hormones that are present in both males and females), and high levels of these hormones leads to more acne.7,8

Let’s have a closer at how blood sugar spikes and a corresponding rise in insulin might affect acne. It does this by:

Several studies suggest that acetic acid, the main component of vinegar, may lower blood-sugar levels. For example, as reported by two studies, consuming several tablespoons of vinegar during a meal reduced blood-sugar after the meal by about one-quarter.9

Adding even more compelling evidence to the argument that drinking vinegar could indeed lower blood sugar after a high-carbohydrate meal, a team of Brazilian and American scientists reviewed all the research published on this topic between 1995 and 2018 came to a similar conclusion. The evidence confirmed that consuming 2-6 tablespoons of vinegar significantly reduces post-meal blood sugar.10

However, the researchers noted that while vinegar works this way in the short term, we need more studies looking at the effects of consuming vinegar every day over the long term.10

While scientists still do not know exactly how acetic acid lowers blood-sugar, they believe it inhibits digestive enzymes (molecules that speed up chemical reactions), which break food down into sugars. By inhibiting these enzymes, acetic acid reduces the production of sugars.9

One study suggests that it is possible that vinegar might reduce the amount of “bad” saturated fats in the bloodstream. In the study, people who consumed apple cider vinegar over 8 weeks experienced a reduction in harmful fatty substances in their blood.11

Vinegar contains several antioxidants, including a type of antioxidant called flavonoids. Antioxidants are molecules that prevent cell damage from molecules called free radicals. This is relevant to acne because the damage caused by free radicals on the skin can result in inflammation and breakouts.

Some people believe that consuming apple cider vinegar makes the body more alkaline (less acidic). This assertion is of no scientific merit. The body’s built-in balance of acidity and alkalinity takes care of this. The body is slightly alkaline, and the skin is slightly acidic. This balance is important enough so as to prioritize maintaining it over everything else, so in most cases, nothing can disrupt it.12

Is Vinegar Safe to Drink?

People have been consuming vinegar for thousands of years, and it is considered to be relatively safe. However, there are reports of rare, harmful effects on the gastrointestinal system. Since vinegar is acidic, drinking too much of it can result in inflammation of the esophagus (food pipe), which can lead to more serious complications over time. Vinegar also can cause wheezing and inflammation of the lungs if it enters them.

While side effects from consuming vinegar are relatively rare, a 2006 medical article points out that as more people turn to vinegar as a home remedy, more research into potential side effects is needed as well.9

If you would like to drink ACV as part of your diet, be sure to dilute it first. Use the following suggestions:

You can also incorporate ACV into your diet in other ways:

A word of caution: While apple cider vinegar may have many beneficial effects on the body, too much of a good thing can cause problems. If you notice feeling worse after drinking ACV, use common sense and discontinue use. Also, be sure to ask your doctor about interactions between ACV and any medications you are taking prior to use.