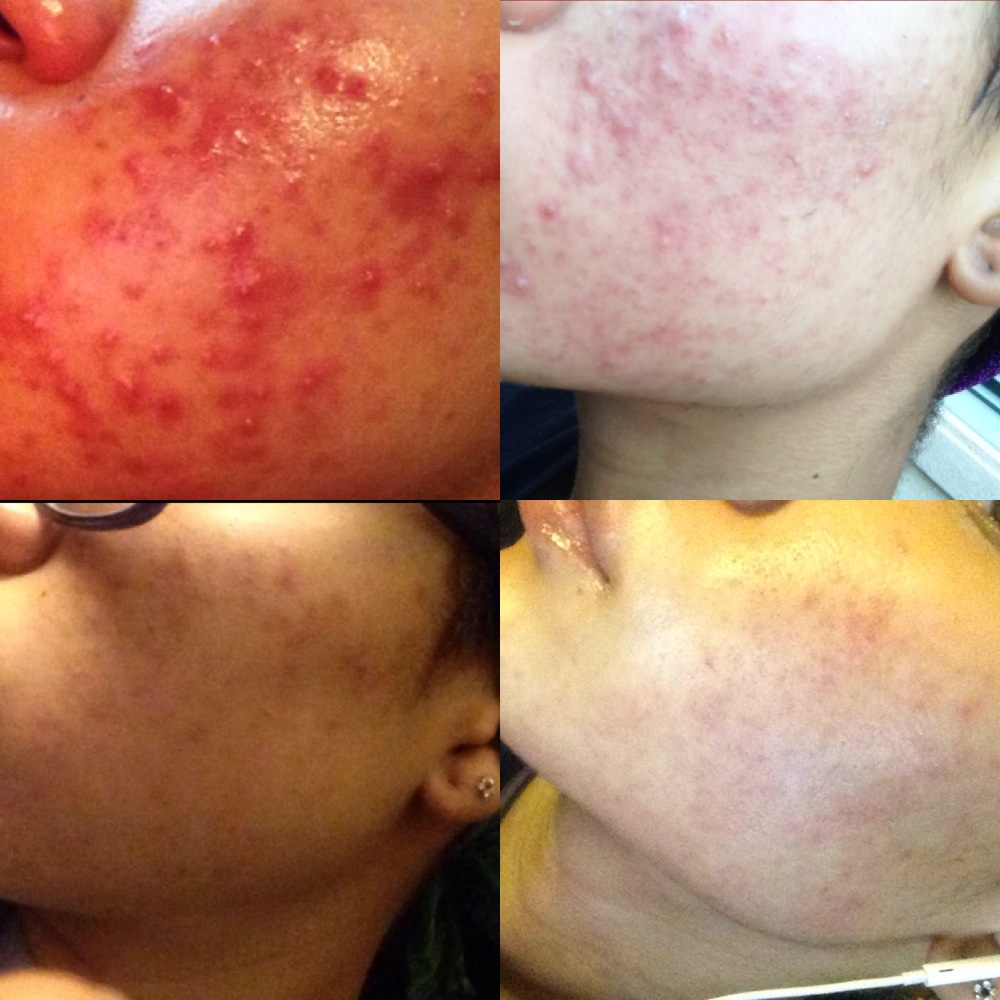 I've dealed with acne since I was 12 or 13 years old. I am now almost 21. Had a bad case my sophomore year and then it calmed down. After it became a steady battle with mild to moderate acne. My skin also scars extremely easy, so that was challenging.

But by the end of 2013 and very beginning of this year, my skin was great! I had very little scarring and I rarely broke out. I felt like I was finally growing out of my acne phase and that it wouldn't strike me again. Man was I wrong.

This past year, I transferred from Southern California to Sacramento State University. My skin reacted extremely bad to the new environment and I began to break out, constantly. I tried every over the counter and at home remedy imaginable. Nothing worked. Around April of this year (2014), I started Tri-Sprintec (a birth control that is supposed to target and cure acne). The BC acted completely opposite to my skin and I began breaking out even worse. By the end of the Spring 2014 school semester my skin was the worst it had ever been. I had only been on the BC for 1 month and it was already so horrible. I kept taking it for another week after I got home thinking that it was just my skin having to get used to it. But I couldn't take it anymore, so I stopped. I was depressed, and sometimes would cry about it. I didn't want to really look anyone in the eye, and I would rarely walk around my own house without foundation on. Once Summer began and I had moved back home for break, I decided that it was time to see my dermatologist (June 2014). She took one look at my skin and knew that it was strictly hormonal acne that I was having and that usually something like Tri-Sprintec would work but not for my case of "hormonal" acne. So I just happened to get bad luck and should have never started that BC. :/

She prescribed me 2 topical medications and 1 oral antibiotic.

I was to put Clindamycin Phosphate (almost like a toner solution) on my face every morning. The Veltin gel on my face nightly. And then take the Solodyn antibiotic once daily. And for face wash, she just told me to buy the Neutrogena Ultra Gentle Daily Cleanser (the foaming formula) from any drugstore. The prescriptions cost me around $20 for all three after my insurance. And the face wash is about $9 at Target.

In this short 3 months, my skin has healed tremendously! The thing about my body, is once I get on the right track, I can react fast to anything. Rather it be my skin, weight, or health. Its just how my body works. Granite, this may not work as quickly for everyone, but if you struggle with acne, I recommend seeing your dermatologist ASAP.

One thing I did was have enough courage to go to the doctor BARE FACED. I wanted to make sure I got the right help that I needed. I needed my derm to know how severe my acne actually was so it could be CURED ASAP. I am so happy now, and I have not missed a day of this regimen my derm has given me. I have no current active breakouts, just some red marks that are disappearing. I do have about 2 pimples that pop up around my menstrual cycle.

I am using Ambi's scar cream 2x a day for the scars($5). Sometimes I use Pond's dark spot correcting cream($9) at night along with the Ambi (just because I have a huge tub leftover). I also use a mild microdermabrasion kit from Olay($23), around once or twice a week, as needed.

**All the above products, including my prescriptions, are purchased at my local Target.**

FYI: I started using the generic version of Solodyn (Minocycline) after the first 2 months because it was cheaper. Ended up working exactly the same for me. I have had no side effects from the above products, other than clear skin.

Type of acne i had: blackheads/whiteheads, light cystic acne on chin and forehead