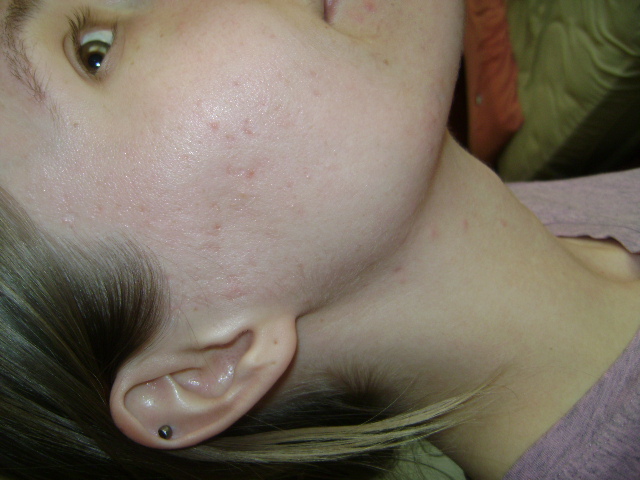 hi all! it's been a really long time (over a year and a half) since i started the regimen. i think i started it back in like, september of 2007. my face has gotten much better ever since. here's what my current regimen looks like:

it works wonders. i used to use the purpose bar (which lasted a REALLY LONG TIME, honestly. i still have my first bar from over a year ago. at $4 a bar, it's totally worth it). i've become a big fan of bar soap during this whole ordeal; i never realized how A. inexpensive they are, and B. how much gentler they are on the skin. i used to wash with cetaphil and i'm still shocked that there's sodium laurel/laureth sulfates in there.

so, here's an updated pic of the RIGHT side of my face -- the side that's usually the most awful. it's not so bad now! all of the cone-ish pimples are long gone, though i still get one or two around period time. i think i have more tiny little blackheads on my chin than before, but after dealing with huge cysts, i'm TOTALLY COOL WITH BLACKHEADS.

the brown/red spots have faded considerably after using AHA for so long. <3

i'm so excited with my improvement that i don't know what else to say. yay!

Photo Information for NEW PIC! first in a long time! over 1.5 years on the