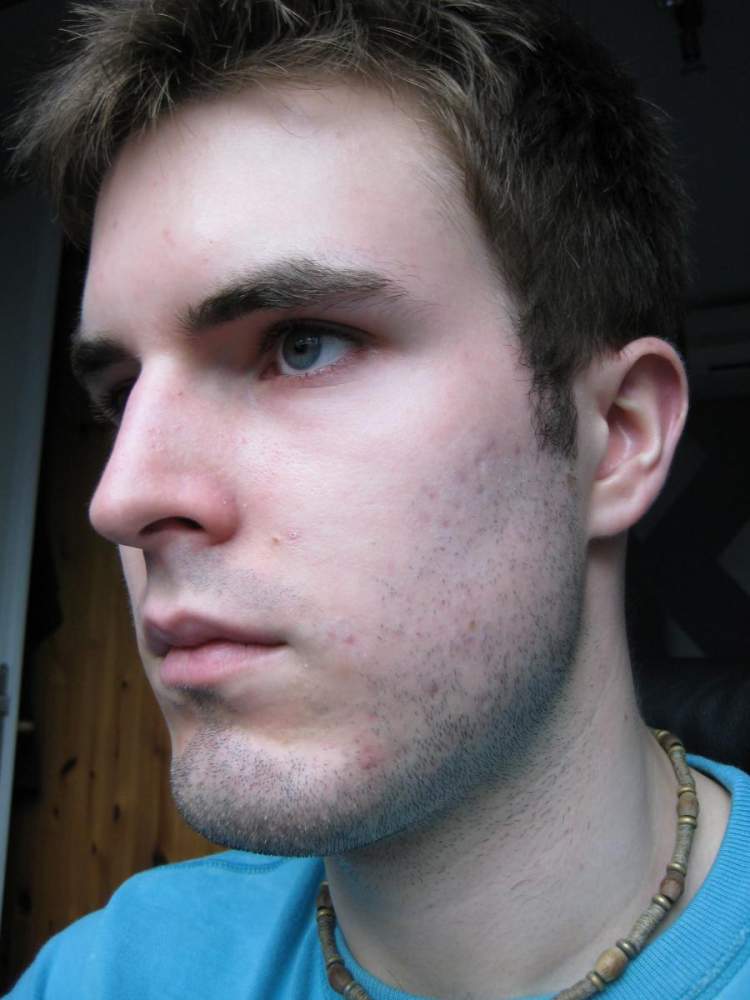 I finally found some time to post 2 new pics. As i said I put the regimen on hold because it dried up my skin too much and made it look worse. So i continued only washind and using non-comedogenic moisturizer. I also tried to leave out dairy products, drank a lot of water (3-4 liters daily), excercised a lot and generally lived on a healthy diet. While the skin was still dry and cracked a couple of days, I got a lot new blemishes in form of inflamed deep cysts (on or two already visible on the last photos). I tried my best not to pick at them and treated them with BPO. Some were so painful I just had to get rid of them by using the sterile method with a needle and so on, not forcing it and being gentle. I went to see the dermatologist this week because things were getting worse again and the red spots from these pimples did not fade and I had the feeling some were slightly indented and will leave scars. So I had him check it out and see if they will scar and he said no. My acne is somewhat under control now by using the Avene products but I was not satisfied. He gave me a cream for the red spots that had to be mixed by a doctor. It contains 1g Ichthyol, 1g sulfur praec (???) and 47,75g pasta zinc mollis (no idea what that is). He also prescribed me a cream called DUAC acne gel, it contains BPO (5% i know it's alot but only using 1 time a day is okay he says) and some antibiotic or something. I am supposed to use the Duac in the morning after washing only if new acne forms and If needed and that other paste for the red spots at night.

I have used this paste for 2 nights now and I must say the red spots are visibly fading away quickly!!! I am very pleased.

Also as you might be able to see it left a scar on my left cheek and the other red spots near my cheek bone seem to be a bit indented. I am really hoping that this is still part of the healing process since they are still reddish and the derm said they will not fade. BUT these pimples started healing about 3 weeks ago and are still red spots and in an angle of light are indented. Does anyone know if this might still be a healing process and the skin will be smooth again or can it possibly leave scars?

I am happy about any information or tip one might have to treat these before they might become permanent scars!