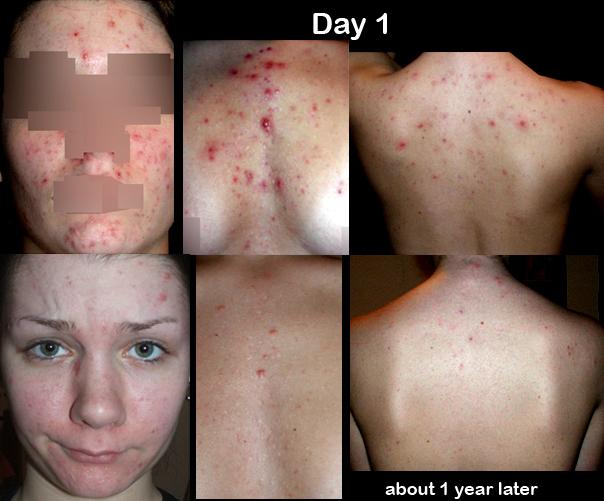 Well, it has been over 1 year since I joined acne.org and started the CSR. I don't do it as faithfully as I used to now; I have a feeling if I did I'd be acne free. Maybe, in honor of it being 1 year, I'll start doing it religiously again.

My face looks great, as far as I'm concerned. The CSR has helped me gain confidence that I never really had to begin with. My chest has made an AMAZING improvement via the scrub brush expholiation and using Mederma on it, which I found out about on this site. I also use normal body wash and the scrub brush on my back as well, and have seen a major improvement there too.

Right now my face is oily, I haven't showered today. I have 2 zits on my forehead that hurt, and one the the right (left in the picture) of my chin (it's one of those under the skin ones that you can't see but it hurts, cystic almost), but I think I look amazing compared to a year ago.

I've endured alot, and I have alot more new scars than I had a year ago, but I don't really mind the scars. For the most part my skin is clear, and for that I am eternally thankful!

Thanks again to Dan (I've thanked him many times and he's talked to me about things but I always feel the need to thank him again) and everyone here who has been not only an inspiration to me but to everyone else as well.

Photo Information for Over 1 year