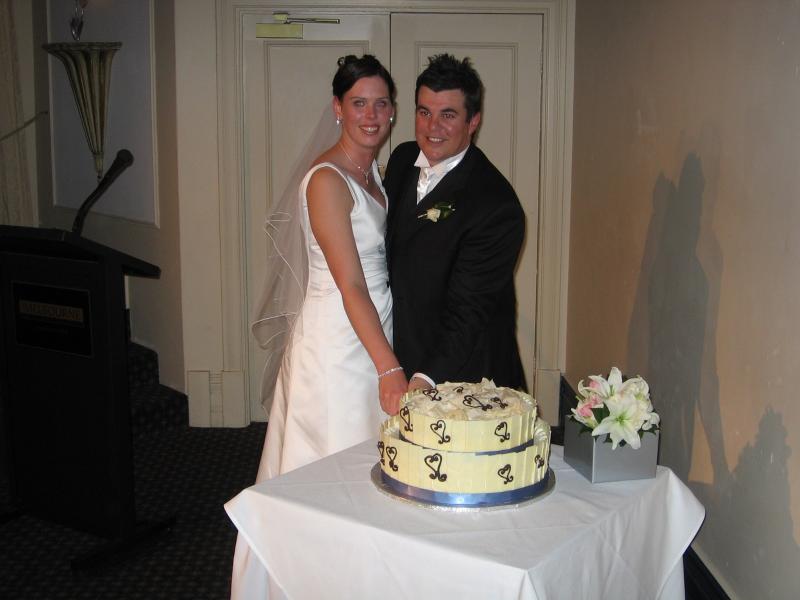 At my cousin's wedding reception/dinner that night

Steven (my cousin) and his new wife, Kristy

Aww, aren't they adorable. That was the night I got really trashed. The reception/dinner was in a dining hall at a Hotel, and all the guests of the wedding had rooms in the hotel. I had 3 beers (some Australian beer) during dinner, then when my mom went upstairs to go to sleep (she goes to sleep early), and she told me not to drink too much, I had 5 more beers, and then I think maybe 6 or 7 Tequila Sunrises. I had one and loved it so I kept getting more until they cut me off. After that, it got kinda hazy, so the next part was told to me at breakfast the next morning. I had Steven to get me more, but he only managed to get one, because the bartender figured it out after the first one. After that, I danced like an asshole and made a fool of myself. Then at midnight, everyone went upstairs to bed. My uncle had to help me get up the stairs because I nearly broke my nose when I fell face first after the first few steps.

The drinking age in Australia is 18, by the way.


just me and my life

Photo Information for At my cousin's wedding reception/dinner that night