I started off by taking both 20mg tablets together at night, right before bed. I had done so much research about the subject, and was not keen to start taking this from all the horror stories I had heard about during and after treatment – however, the doctor assured me that any side effects I experienced were reversible, and that if I stopped taking medication immediately anything I experienced would go away, give or take a month at most.

Today my joints are feeling quite stiff and tired, exactly like I just worked out the night before. Not too bad though. I am starting to feel a slight tingle in my lips, like they are slightly dry. I have been using the Oratane lip ice that was given to me by my doctor from Day 1 though, trying to prevent the chapped lips as much as possible. I have also been having as much water during the day as I can, which is usually about a litre and a half a day. I’ve had very slight headaches that come and go, but pretty sure that that is just from stress at work, and not the medication. I can’t see any change in my skin in particular – for the last three days I have had a few white heads pop up (only one was quite a large one)

I can definitely feel that my joints and my back are stiff. A few more spots popped up (no pun…) over the weekend, but I think I definitely think I made them worse by touching them often, and picking. In general I can definitely notice a difference – the swelling and redness I would usually get from a spot is hardly there at all. I had a very large spot that I extracted a few days into the treatment, and it healed and smoothed over a heck of a lot faster than it would have. Actually, there would have just been another even worse spot pop up in the same place, but not at all this time. My lips feel inflamed every now and again, but really not bad. I’m constantly drinking water and using lip ice so hopefully I put those particular side effects off for as long as possible. Something my skin only started with about 5 months ago, was that by 12pm each day it would start to feel kinda oily, especially my forehead. That seems to have lessened, which is great. The below pictures are of Day 8. 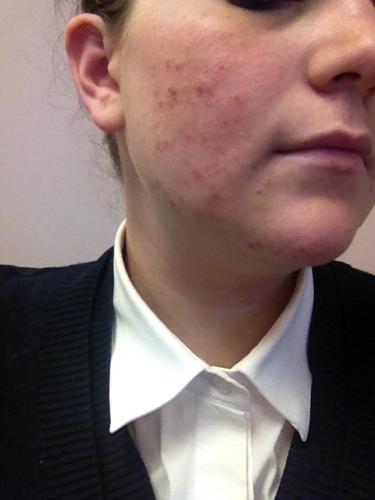 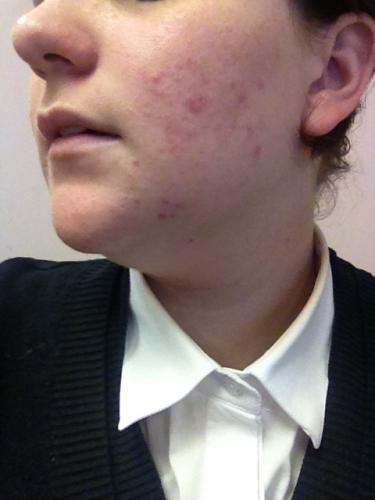