Hey I thought i'd share a post from my blog, I cannot link you to my blog (acne.org rules) but i'm sure that if you look me up on Google you will find my blog! 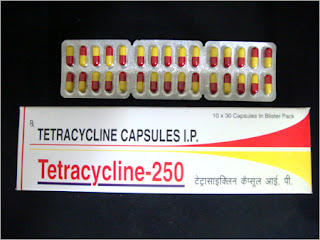 "Come down to the surgery and I will sort your skin out with some tablets"-- Dr. Barnsley said as he pulled my toenail off. I knew little at the time about acne and the treatments-- I was a "newby". I trusted any drug that the doctor would ever prescribe me at that and age not even consider the down sides, I just did what any normal human being does and took the medication like the doctor ordered. I have always being very meticulous with my skin regime-- careful and concise. I'd set an alarm at 6:07 AM, one hour before I woke up to have breakfast to take the antibiotics, i'd have a cup next to my bed, it would have to be the same time everyday and then 12 hours later at 6:07PM-- I really wanted the drug to work, you do anything that you can in times of desperate need.

Oxytetracycline it was called, I vaguely remember much about how the drug really worked over the 6 months that I took it. I remember starting it on the 16th of December 2011 (I somehow remember numbers really well). My acne wasn't that bad at the time, in fact it was a petty few spots that were just bugging me-- my mum saw the potential outcome of these few spots as it ran in the family; it was going to end up worse, a lot worse. So mum was looking into the already dark future ahead and wanted to get into a regime that would work before it was too late. After 3 months my skin was clear-- not one imperfection, not even a scar. This was down to the fact that my acne hadn't matured to that such aggressive stage yet, so the drug could take care of it with ease. My skin was amazing for another 3 months and then it slowly crept back and this time, much, much worse.

Back to the Doctors I went, this time it was a combination of Lymecycline and topical benzyl peroxide. It was ineffective and I spent that Christmas with acne-riddle skin, a deep feeling of shame and disgust in my self image. I eventually gave up hope with the Lymecycline and continued using Benzyl Peroxide for the following year. Then January 25th 2012 I began Lymecycline yet again as I really wanted it to work in an act of final desperation before even considering the notorious accutane.

The sort of "prognosis" of the drug was textbook--the first week a breakout, then an ever-slowing decrease or sort of entropy of the acne from around week 3 to month 3 (week 12). At around 9-12 weeks my skin was getting a lot better, a huge improvement-- but not in anyway the results that I hoped for at all. The inflammation subsidised greatly, the amount of yellow pustules I would wake up to on a morning was a lot less which made waking up much more bearable.(a good way to start a day).

The redness still stayed, the "hyper-pigmentation"(red marks left after a spot that never seem to go) still stayed, so really on the sort of health side of things the acne was obsolete yet the remains of a never ending civil war between my skin and acne still remained (bit melodramatic). A large amount of scarring still remained-- bumps and dips covered a large proportion of my face. Luckily (May 26th) my treatment Danné Montague-King (DMK) came into my life and changed my skin and my life for good.

I began to realise a few side effects from the drug-- yellowing of my teeth which to this day is the worst side effect as let's be honest, no one likes to look at yellow teeth. (hence why Hollywood actors have their teeth whitened).

Other side effect were; very greasy hair, albeit I was in that transition period becoming a teenager but since I stopped taking them my hair becomes a lot less greasy-- this was due to the hair-thinning effect that the drug does, it things your hair out a lot. That was it for the side effects for me in all honesty, nothing else really struck me.

To sum up antibiotics-- they are ok, probably the best drug the NHS can offer you, they will take a while to kick in(months) they don't cure any scarring or other pigmentation problems. If you haven't tried them yet though it may be worth using them but remember they only last 6months(including the 3 months they take to sort of "kick in"). So really you only get potentially 2-3 golden months. For anyone I would always recommend DMK as a course of treatment, as it always produces results, covers any type of skin problem and is a long-term solution.

As always take care, I give my utter most sympathy to any of you that are suffering from acne and there is a way out! Remember that there is a light at the end of the tunnel for all.

I am going to be blogging a lot more this week, maybe a second post tonight or tomorrow! I have a few things in mind that I want to talk about, but if anyone has any suggestions please feel free to leave a comment below and i'd be happy to write about it!

Best of luck to anybody that's sitting exams as well!

Please share this with at least one other sufferer to spread the word!