Today is my 28th day on Accutane (Claravis) at 20mg/day. I am thrilled. I'm not sure the photos show any real improvement, because the damage I did by popping and picking when my acne was bad will probably take a long time to recede. But my cheeks feel so much smoother, and when I get a pimple, it heals so much faster!

For the first 2.5 weeks, I didn't notice anything except for my skin actually seemed oilier than usual! I wondered if it was just because I started using gentle cleansers and heavy moisturizers right away, before any dryness had set in. Could have been, but recently I've read other people talking about a sort of "purge", so maybe that was what was going on? At any rate, right around the 2.5 week mark, I noticed a drastic change - I could go for 5-7 days between hair washings! I didn't have to blot my face throughout the day, and at the end of the day, my makeup was still there and I didn't look oily! In the mornings, my face is a great texture - no oil, not dry. The only negative side effect I've had has been dry lips and nostrils, but that has been very minor. I use the daily conditioning Blistex pot or just Vaseline, and I don't have flakes or cracks - I just know I need to apply it more often than I previously would have. Cetaphil moisturizer (regular for night time, SPF 50 for daytime) are so far more than adequate, as my skin is not overly dry - it's just right! My hair is not "dry" or damaged looking in any way, and my scalp is not flakey - it's just not oily! If this could continue, I'd be so happy!

But I know that's unlikely :s I have a dermatologist appointment tomorrow, and unless anything changes, I know his plan was to up my dosage to 40mg/day. I'm nervous. I don't want the red, flakey skin everyone talks about!

On the other hand, if 20mgs is helping me so much, maybe 40 will be even better... Guess I'll find out soon enough! Thoughts, anyone? When did others start having negative side effects? I expected them right away, and have been pleasantly surprised they've held off this long! My nostrils have started feeling a bit dry lately, and when I blow my nose at night, there is a bit of blood in the mucous - but nothing I would classify as a nosebleed.

As for the pimples themselves, I have had a few come out, but no major breakout. I have noticed they perform differently now, though: I will get a reddish bump, but it doesn't really hurt, and doesn't seem to have a head...of course, I try to squeeze them, which irritates them and makes them a bit sore, but usually nothing happens, then the next day, I will be able to see that there is white in them, but not a whitehead...they will scab up a bit, and if I pick at the scab (yeah, I know, I know :s), it comes off and reveals a little pool of whitish liquidy goo. But once that's gone, by the next day it is dramatically improved! Just a little pink spot left! I feel as though the skin is renewing itself at a much faster rate than usual.

I would really love to hear from others about whether you've had a similar experience, and when/if you experienced the worst of your side effects - please comment!

Here are my updated photos. It looks way worse than I think it appears in real life - I think the flash brings it out, and of course, these photos are taken with no makeup, right after I've washed and moisturized. When I put makeup on, everything covers quite well, because the skin is smooth now

You may notice some brown blotches - that is the "Mask of Pregnancy" (melasma) that I'll always be plagued with, which is exacerbated by the sun, too. 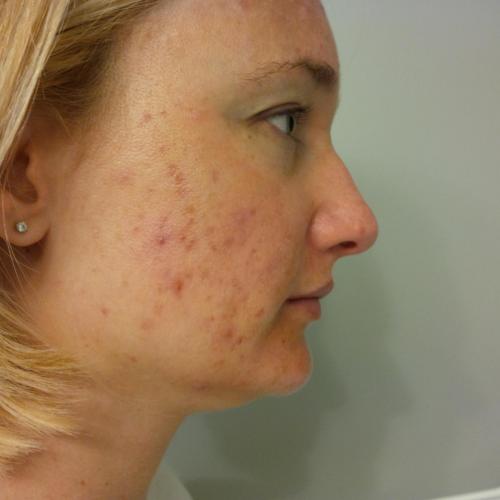 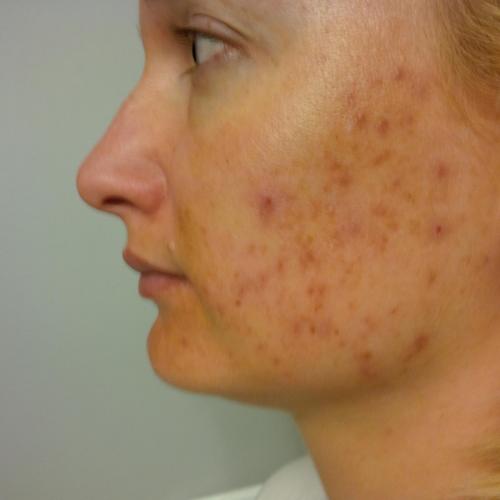