This is a topic that I don't think anyone has touched on. Honestly I didn't even know this acne product changed in its formula, rather I thought it was just a change in the packaging. However when I recently purchased it, I noticed on the left corner of the tube the "NEW FORMULA" label and wondered how it would compare to the other one. I've been trying to look for reviews on the new Clearasil Ultra Acne + Marks Wash and Mask formula, but can't find it on Youtube and I can't tell if the reviewers on Amazon are talking about the new or old formula (stuff from last year I assume is the old formula but after 2012, I can't quite tell since the image on Amazon is that of the old bottle). But you're probably all are like - Hey chick get on with the comparison! So I shall.

Here is a picture of the old formula container and the new one: 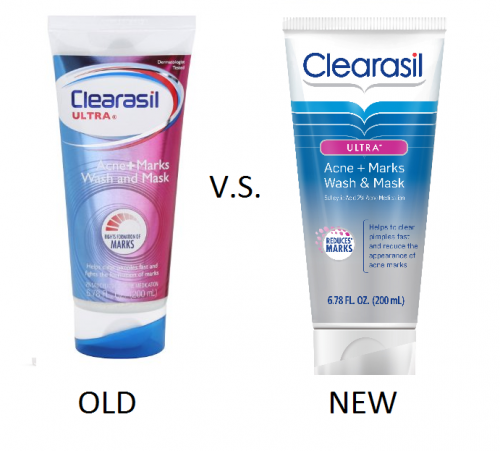 Clearasil did a complete 360 on these ingredients that's for sure. When used as a cleanser or a tri-weekly mask, both products claim to help with acne fast and to reduce the appearance of acne marks.Now that we have the two formula ingredients it is interesting to actually evaluate them.

At first glance of the original formula I cannot see any kind of ingredient that would work to help with acne scars. True I see things that will help with acne - like salicylic acid and lavender extract - but nothing phenominal to help wtih scars. I loooked up the different extracts and according to some websites they help with scarring, however it is in the middle of the ingredient list. If you don't know it already but ingredients in skincare products are listed by how much is in there. For example - Water makes up most of the product since it is the first ingredient and so on and so forth. The scar fighting product is ingredient number 10, 11, and 12 out of 20 ingredients, so its affect isn't as great if it was ingredient 5. The new formula however has Niacinamide (Vitamin B3), which is known to reduce the appearance of acne marks, and lactic acid (in the form of a salt Sodium Lactate) which an AHA acid which helps with skin renewal, exfoliation and in turn reduces the appearance on marks. Niacinamide is ingredient 7 out of 23 and Lactic Acid is 8. Much better affect since it is higher up in the ingredient list.

Looking at the mask side of the product - the new formula added kaolin which is used in clay masks to dry out the skin, draw out impurities and help with acne. The original formula doesn't have the mask-like property. It never felt like a mask on your face - Just cleanser sitting there for a minute.

So my experience with both of them - The original one I purchased in May of 2011, when I experienced a nasty breakout from flaxseed oil. It was all over my already hyperpigmented face and I looked disgusting! After I used it the first day, my acne was greatly reduced and my face was a lot smoother. I used it for about a month and most of my acne was gone. However it appeared to stop working after I used it for two months, so I moved on to oatmeal which helped calm my skin down. However I really liked the cleanser - it was thick feeling and helped with acne. I couldn't tell if it helped with my scars since I only used it for 2 months. In any case it was nice while it lasted.

My encounter with the new formula happened when once again I experience a nasty breakout due to my period. Usually my menstrual breakouts aren't too bad, or at least they haven't been for the past year, but April was just weird -my cycle changed from 38 days regularly to 35, then to something else, then to 46 then jumped to 28, so my hormones are obviously going haywire. Really wanted my acne to go away and I drank tons of water and ate mostly fruits and veggies but that didn't help it all too much. So I picked up what worked for my before - the Clearasil cleanser and noticed that it was a different formula - looked at the back and noticed the change in ingredients. Intrigued I tried it out. The feel and look was completely different. This cleanser was runny, so I had to be careful of how hard a squeezed it, and the smell reminded my of my Queen Helene Mint Julep Mask. When it dried like a mask if felt like a mask though not as thick. I am currently on day 3 of using this both day and night and I gotta say that I am really liking it. My acne has reduced in size - so hopefully by May it will be all gone.

As of right now it is working for me, but it doesn't mean that it will work for you. It can be a tad bit drying (though a little less drying than the original formula) so put moisturizer. (I use the CeraVe PM moisturizer and I LOVE it! <3) Check it out - it's worth a shot and it isn't expensive - like $7 at Target for 200 ml (6.78 fl oz)

Anyway I hope this was informative to someone out there!