Whoops, I'm late with this entry.

So I think in the last update my skin I was still getting fresh spots, but since then the ones I've had have calmed down, and are now at the healing stage, with no new ones. Normally I should be happy about that, but it's at this stage that I can't help but notice all the scarring I have. Maybe it's rose-coloured glasses, but only three months my skin used to be so smooth, and without the bruising of acne, that it's kind of hard to take. At first I was hoping they'd fade into oblivion (which reminds me I really want to play Skyrim, but won't let myself get it till I'm on holidays), and they have faded, but not enough. Not that I'm taking the lack of fresh spots for granted, of course *nervous glance*. For all those true skin fans, my regimen is still the same, no changes there. I am also still battling seb derm, but I'm hoping it'll be like an ex; initially you're drowning your head in toxins (in this case Selsun, not alcohol) to no apparent avail, only to realise down the track that you're no longer having to "medicate" as often, and in fact you kind of forgot they were even a problem*.

Now onto the fun stuff!! This weekend I had a busy, fun-filled weekend (alas without the tentatively-scheduled phone date, I'm sure you'll all be disappointed to know. In fact datee is considering opting out, the wuss), starting with Friday evening birthday drinks for my Ranga friend. Turned out he was there with all his boss and workmates, which I thought might be awkward, but it was actually hilariously fun. His boss is an absolute scream, and was very excited by my Long Island iced tea (soo yummy), so decided to join... Which meant everyone else felt compelled to as well, and in no time we were chatting away like best friends and sharing intelligent debates on the wearing of lederhosen (traditionally they are worn and passed down generations from father to son; oh, and did I mention this is all without washing??), and weird foods we've eaten, etc. Since those guys had been going since work, we called it a night comparatively early, which suited me because I was pretty worn out (and starting to get stiff) from my jog beforehand. Oh, and I wore The Dress (finally!), and got zillions (SI unit) of compliments about how nice I looked, despite the small horn-like feature on my forehead (some people actually pay to get implants for that, and I get it for free- score!) and forgetting to apply mascara beforehand 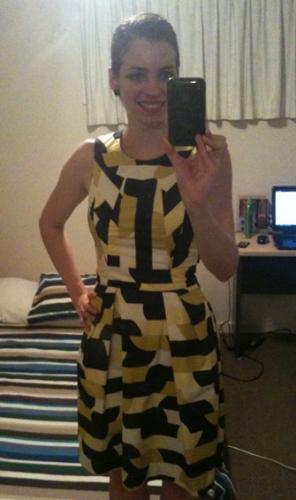 The Dress. And me in it. Without mascara. Shocking, I know. Don't judge me for my bed being on the floor, I'll get around to getting a frame eventually, I've only just moved in! (Okay it was two years ago, but the bed shops are so far away...)

Saturday I slept in until after lunch (I am not a morning person), and then in the evening went for a sushi dinner with a friend (I tried eel for the first time, which was weirdly slimily-textured), then went to see a movie. We saw Crazy, Stupid Love, and it was hilarious. I highly recommend you see it. It's a good balance of tongue-in-cheek humour, romance & Ryan Gosling for the girls, and Emma Stone for the guys. There's a few awful Hollywood moments (e.g. valedictorian's speech, for those in the know), but even so I laughed msot of the way through (I'm one of those people that just can't help myself and so I frequently burst out laughing, quite boisterously I'm told). The "photoshop" scene was particularly exuberant on my part. Anyway, I digress... Umm Sunday I had a quieter day doing some domestic stuff, but mostly spent it killing the Zerg in SCII.

Since then it's just been uni-ing (so jealous of the underlings- I mean undergrads having the summer break [3 months!] off), incrreasing to attempt to fight Jeans-Tightening Syndrome that seems to be afflicting the female population at the moment. To add to this problem, this morning I baked the chocolate chocolate-chip biscuits I promised for my South African friend's birthday (I don't know why I offered to, his wife is an absolute demon in the kitchen and as soon as I said it I regretted it. On top of that last night I got some more bad news, so couldn't face baking, mean I had to do it all first thing in the morning, which for me is kind of a chocolate-filled hell); and in the process needed to lick the spatula after creaming the butter and sugar (there goes my daily energy allowance), then periodically sample the mixture (just in case the flavour or consistency changed throughout the shaping process), and then sample the cooked product to make sure it wasn't poisonous (despite my best efforts it wasn't). 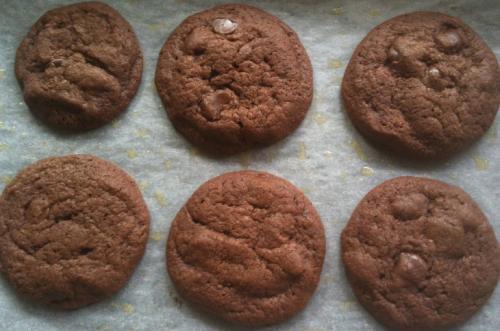 These biscuits are low fat, vegan, gluten fr- oh buggerit. They'e chock full of butter, cocoa and dark brown sugar, and they're all soft and chewy in the centre with big lumps of dark, melt-in-your-mouth chocolate throughout. I call them Murder By Chocolate.

Since this entry's getting quite long I'll save the remaining material for the next one, and leave you all to get fat just by looking at the biscuits, of which I made about 40 (some for birthday boy to take home, the rest to be decimated by the morning tea crowd. Apparently "too sweet" isn't in their vocabulary).

*I realise this makes me sound like an alcoholic, which isn't an accurate description because although I love alcohol (beer, wine, vodka, port, etc.), I do not like hangovers, which really put a damper on my spirit (ha!) and are sadly becoming more and more likely with each addition of a year to my age... Although maybe I'm just out of practice, and need to conduct a desensitisation course for my liver?

<- I chose this one because he's nice and seedy and green, just like me with a hangover. Which, you'll be proud to know, I did not have on Saturday despite the deliciously refreshing Long Island iced teas.